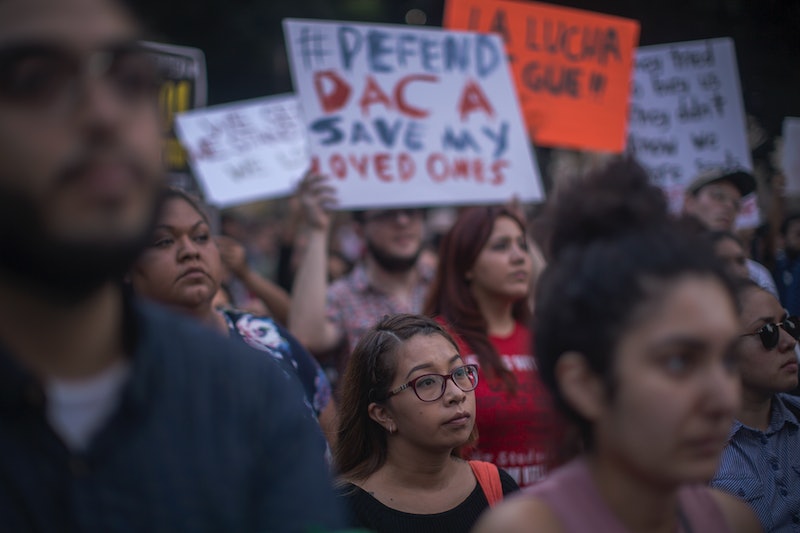 The Trump administration's announcement last week that it would be ending the Deferred Action for Childhood Arrivals (DACA) program left "DREAMers" shaken and afraid. But even as the young immigrants who were brought to America without documentation as children were faced with a government seemingly hostile to them, they fought back with a nearly unprecedented team of allies, showing how much the fight for undocumented immigrants has transformed since DACA.

By ensuring that DREAMers could freely and openly say they were undocumented without fear of getting deported, DACA changed how they were able to interact with American society and how they have been able to advocate for themselves. In the five years since DACA was implemented in 2012, it's changed not only how they fight, but who they fight alongside.

On a conference call last week that United We Dream — the largest advocacy group for DREAMers — held with activists and DACA recipients to talk about what the policy change meant, Greisa Martinez, advocacy director for United We Dream and herself a DACA recipient, spoke of how the current fight for DACA has changed in the past 5 years.

DREAMers have so many more supporters, she says, with even the Apple CEO coming out to stand with DACA recipients.

Activism from undocumented immigrants didn't just start after DACA, of course. In 2006, massive rallies and "days without immigrants" jumpstarted the immigrant rights movement, contributing to the political situation we're currently in (and likely leading to DACA getting enacted in the first place). But the DREAM Act, which would provide a legal status and path to citizenship for DREAMers, has floated around Congress without passing since 2001.

But what seems different now is that it's not just immigrants who are fighting for immigrant rights. On Wednesday, the Democratic party leadership held a press conference where they promised that finding a way to save the DREAMers from deportation would be their top legislative priority for the fall. It reflects a change in attitude about immigrants in the Democratic party, one that extends even beyond just that group.

"We're seeing so many people outside of the traditional immigrant rights sphere coming out and supporting Dreamers, DACA, even the Muslim ban, the airport protests," Lynn Tramonte, the deputy director of America's Voice, an immigration advocacy non-profit, tells Bustle. "The complexion of the crowd looked different. It was diverse — you had people of all ages, people of all races."

Lynn sees the change in the people getting involved as likely connected to President Trump. She says that many people didn't think he would actually go forward with the anti-immigrant agenda he spoke about frequently on the campaign trail, and that seeing him follow through on things like banning travel from certain Muslim-majority countries and ending DACA have pulled people off the sidelines. "I see a lot of white people coming to meetings, saying 'what can we do to help? I can't believe this is happening in my own back yard,'" Tramonte says.

The connection between the DACA fight and the broader anti-Trump forces that have marched in the streets so frequently was on display Tuesday night at a rally in Manhattan's Foley Square (right next to the offices of Immigration and Customs Enforcement for New York City) and crossing over the Brooklyn Bridge. The New York Immigration Coalition organized the event with barely a day of advanced notice, notifying people via text Tuesday morning, and nevertheless getting thousands to attend.

The protest was similar to one in Foley Square just over half a year before, when activists took to the same area to protest the travel ban implemented in the first days of the Trump presidency. The same chants heard at many Trump protests were chanted — "No hate! No fear! Immigrants are welcome here!" "No ban! No wall! Sanctuary for all!"

"DACA gave us freedom. Let us show what immigrants can do."

Some of the people at Tuesday's rally said they'd protested then as well, and that this moment reminded them of taking to the streets suddenly in reaction to the unexpected travel ban. But in the intervening months, the marchers have gone from spontaneous to organized, and they know they're in a coalition together.

The plight of DREAMers has come a long way. Before DACA, they were undocumented kids fearing deportation. Now they're being defended by leaders of industry, presidents of universities, and religious institutions.

"I have never seen this many people be outspoken," says Carlos Iberra, who came to America from Mexico and hasn't been back there for 26 years. "DACA gave us freedom. Let us show what immigrants can do."

Iberra thinks that one of the problems for immigrants has been how many Americans start with a preconceived notion of what an illegal immigrant is, but that DACA, in allowing immigrants to go public and speak out, has allowed that to shift. "We have to start changing the face."