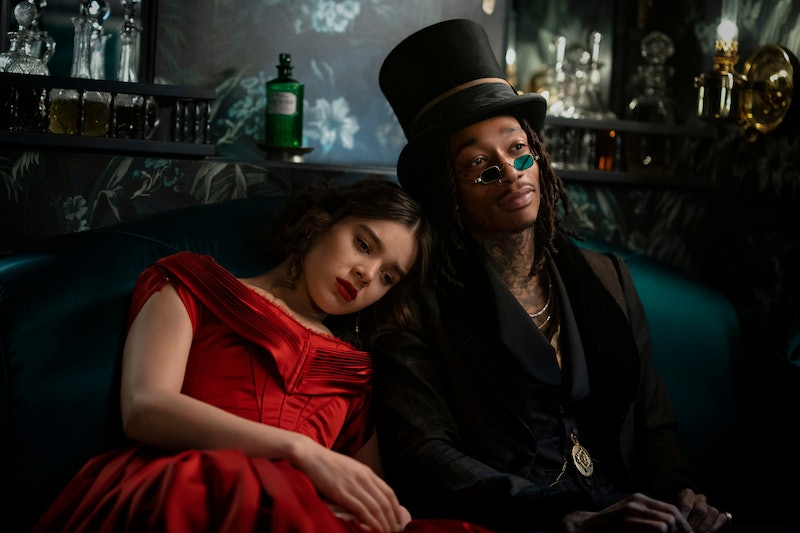 "This is bullsh*t," Emily Dickinson (Hailee Steinfeld) tells her sister Lavinia (Anna Baryshnikov), protesting the zero dark thirty wake-up call to fetch well water in the opening scene of Apple TV+'s Dickinson. The moment is as thematic as its language is anachronistic. Emily was writing the first verse of her now-famous poem “Because I could not stop for Death” when Lavinia knocked; now, she’s heaving pails. It’s a clear distillation of Emily’s defining fear throughout the series: that what society demands of her as a woman will scupper what she craves for herself as a poet.

If you’ve read anything about Dickinson, whose first season will be released on Apple's new streaming service on Nov. 1 in its entirety, it’s probably that the series is millennial: that the show argues Emily Dickinson “is best understood as a contemporary millennial” or that the poet is portrayed as “a punkish millennial” or a “millennial partygoer” or “young, horny, [and] very millennial.” (Even Apple’s marketing materials announce Emily as “the unexpected hero for our millennial generation.”) The adjective is not always intended as invective, but rarely is it meant as a compliment. At best, it’s a placeholder that conflates the show’s tone — its modern diction, its trap-heavy soundtrack, its casting of Wiz Khalifa as Death — with its audience, a group of people who have come of age around the same time and appear to have something in common for it.

To call the series millennial would be to charge it with figuring out exactly what that ineffable, common sensibility is, a goal that doesn’t feel central to the show at all in the three episodes that screened for critics. It also reduces the series to something less than its parts. The characters in Dickinson don 19th century fashion but speak in 20th century slang (bullsh*t doesn’t enter the English language until the 1900s). In Episode 3, prim dancing to a stately minuet transitions into twerking to trap music. But the contemporary intrusions, often played for laughs, are a commentary on Victorian life, not our modern one. For Emily especially, it's character development through form as much as through story.

“I was playing with this idea that Emily’s inner consciousness doesn't fit in with her own time,” showrunner Alena Smith tells Bustle. “People tend in the show to speak in a slightly more contemporary way, or to listen to contemporary music, as a guide to when they're feeling constrained by that period and society that they're trapped in.”

Smith’s Emily is a queer feminist who rejects her time period's ideas of what a woman should be. She’s keenly interested in science and gifted with language. The show's tone is angsty and disjointed, alternately lyrical (when Emily’s poems are mined for dialogue) and flip (as when Emily’s brother Austin announces his first appearance with a “What’s up, sis?”). But you’ll never hear a character reference something historical that’s yet to happen, which could rip a viewer out of 1850s Amherst, Massachusetts. That would be a gimmick. Language here is a device.

It’s true that Emily was ahead of her time. Of the roughly 1,800 poems she would go on to write, only 10 were published while she was alive (and highly edited at that). On the page, she was pure idiosyncrasy — slant rhymes, cryptic capitalization, vocabulary culled from geology, geometry, and experimental science. But it’s also true that time caught up with the poet before now, a fact that Smith doesn’t just admit but also relies on. "The show is built out like a collage," she says. "I would just read so many of her poems, and read tons of biographies and history books about this time, and just collect facts that intrigued me, and then paste them together in odd ways and use them as jumping off points for plots and stories for the show."

Emily Dickinson has been the subject of feature films, plays, and comic books, but it makes sense that TV, which has retained an experimental edge over movies even as it has absorbed so many of its biggest stars, is where Emily is rendered the most free. Famously reclusive for the latter half of her life, Emily is most often portrayed as a spinster cloistered within the Dickinson family home, her wardrobe an assortment of white cotton lawn gowns. But in Dickinson the Homestead is a place for throwing parties and making out. Her dresses are rich reds and blues. Wiz Khalifa stops by in a carriage.

If this is a new Emily, it’s not because Smith’s defining her on millennial terms. It’s because her Emily is unshakably, ambitiously in the world, a whole person scribbling poems on the backs of any paper scraps she can find, relishing in the last gasp of the freedom she’s destined to forfeit.

More like this
Netflix Shut Down 'Bridgerton' S3 Rumours About A “Very Dark” Storyline
By Bustle
Everything To Know About The 'Daisy Jones & The Six' TV Series
By Maxine Harrison and Brad Witter
Ashton Kutcher Wants Danny Masterson “To Be Found Innocent” In Rape Retrial
By Jake Viswanath
The Banned 'Friends' Ad Shows Monica As You’ve Never Seen Her Before
By Sam Ramsden
Get Even More From Bustle — Sign Up For The Newsletter
From hair trends to relationship advice, our daily newsletter has everything you need to sound like a person who’s on TikTok, even if you aren’t.