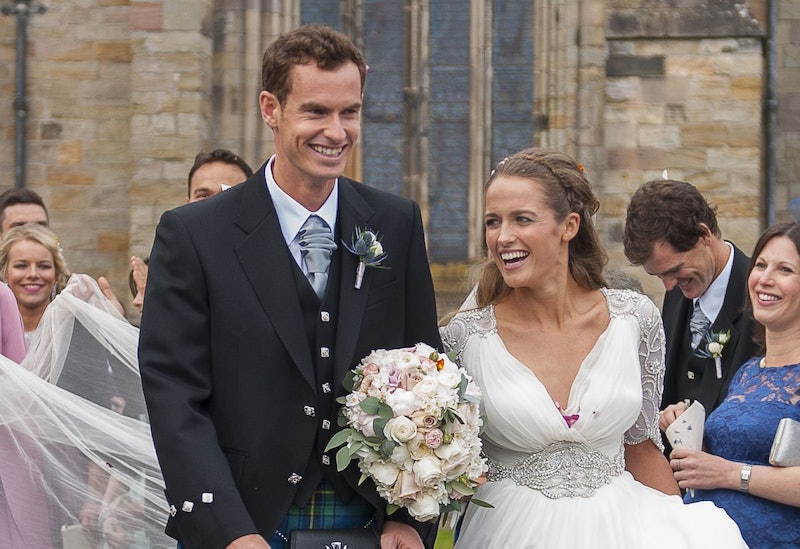 British tennis champ Andy Murray has endured many ups and downs over the course of his hugely-successful career, some of which are set to be explored in Amazon Prime's latest documentary Andy Murray: Resurfacing. However, all sporting achievements aside, his long-term relationship with wife Kim Sears is no doubt a personal highlight for the tennis pro. But how did Andy Murray and Kim Sears meet?

According to Hello!, the couple first met whilst attending a party for the U.S. Open back in 2005, where Sears had been travelling with her father Nigel — who was the head of the women's lawn tennis association in England. Despite the pair's romantic relationship developing pretty quickly, Sears and Murray managed to initially keep things low-key. However, following the Wimbledon champ's first major tournament win in San Jose, California, the couple went on to become the sweethearts of the tennis world. As the BBC reports, Murray and Sears eventually tied the knot on April 11, 2015, during a small ceremony in his hometown of Dunblane, Scotland, and have since gone on to have three children together.

As mentioned previously, a behind-the-scenes look at the sportsman's life is about to debut on Amazon Prime, and Andy Murray: Resurfacing will look into the British former world number one's professional and personal journey over the past two years. The documentary, which is available to stream on the platform as of Friday, November 29, will delve into some of the most poignant moments of Murray's life, including the harrowing 1996 massacre in his hometown of Dunblane, his personal relationships with those closest to him, an infamous on-court display of emotion, and the intense medical issues he faced in recent years. As iNews reports, Murray previously explained how he hopes the film will go on to inspire viewers, and revealed his aims to provide fans some "insight" into what he was going through over the past couple of years, because at certain times he wasn't "able to perform on court."

I don't know about you, but I'm very much looking forward to what promises to be an insightful look into the life of Britain's biggest tennis star, and you can stream Andy Murray: Resurfacing on Friday, November 29 on Amazon Prime.

More like this
Ryan Gosling’s Ken Just Got The Seal Of Approval From His Partner Eva Mendes
By Rachel Mantock
Perrie Edwards & Alex Oxlade-Chamberlain Have The Sweetest Engagement Pictures
By Lara Williams and Frances Stewart
At 28, Emma Thompson Was Already A Star — But Unhappy In Love, Actually
By Olivia-Anne Cleary
Annie Lord’s Memoir Will Make You Believe In Love Again
By Shahed Ezaydi
Get The Very Best Of Bustle/UK