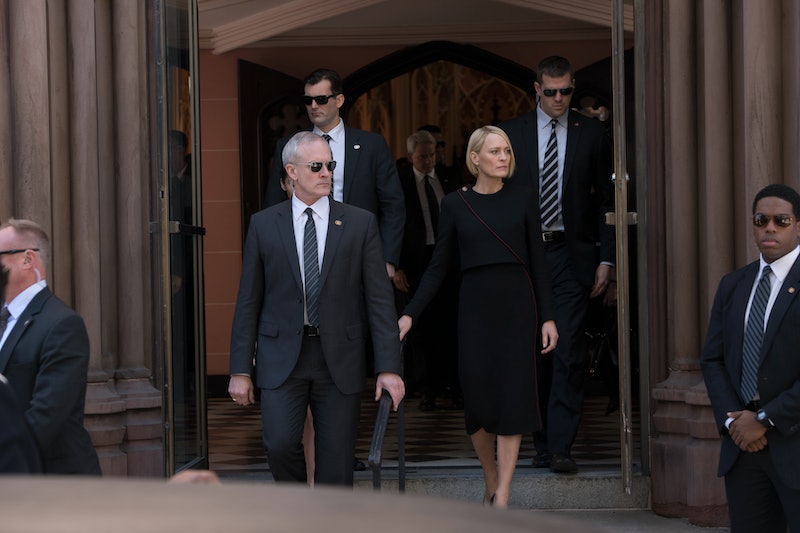 Spoilers for the series finale of House Of Cards. It's hard to imagine that anyone in the world of House Of Cards believed for a second that Frank Underwood had died of natural causes. The final season of House Of Cards drops hints about how Frank Underwood died between Season 5 and Season 6, and it seems that the official narrative is that Frank simply died in bed as a result of some kind of medical issue. There's no talk of assassination or any parties who may have wanted the former president dead, but it's clear that Claire knows more about Francis' death than she's letting on. It's not revealed until the final scene of the final episode of House of Cards that Frank Underwood was killed by someone who had been working with him since the show's very first season.

The original version of Season 6 likely wouldn't have killed Frank Underwood. But, as the show's former star Kevin Spacey was removed from the series following at least 15 allegations ranging from sexual harassment to rape and assault, according to a 2017 story by USA Today. Netflix cut ties with Spacey in November of 2017, leaving the final season of House Of Cards without their central character. While the show may have not intended to kill off Frank, the manner in which they ended the character's life was appropriately melodramatic for a show that often featured dramatic stakes that could rival Shakespeare's greatest tragedies.

During a heated confrontation in Claire Underwood's office, Doug Stamper argues about the importance of maintaining the legacy of Frank Underwood. Doug Stamper dedicated his whole life to building up the legend of Frank Underwood, so much so that he killed the man behind it when it seemed as though that man may jeopardize the legend. As Doug reveals, one night Frank Underwood has begun storming towards Claire's bed with intent on killing her. Instead of watching the man he dedicated his life to become America's most notorious murderer, Doug force-fed Frank too much of his own medication, triggering an overdose.

With Frank Underwood dead, no longer at risk of blowing his own cover by continuing to anonymously reveal whose deaths he's directly responsible for to journalists, the legacy of Frank Underwood as a man who fought conflict and did his best for the United States Of America could live on long past the man himself. However, when Claire drives Frank's old letter opener into Doug Stamper's chest, she kills the only person who had any interest in letting Frank Underwood be remembered as a good man.

With both men dead, Claire Underwood is solely responsible for how the world and the history books will remember her ex husband's legacy. That is, if she doesn't end up sending the nukes she was threatening the world with earlier that episode and bringing about the end of civilization as we know it. Then again, if Claire does bring about the end of the world, then the world will end the way Frank wanted it to end, at least — with an Underwood in the White House.