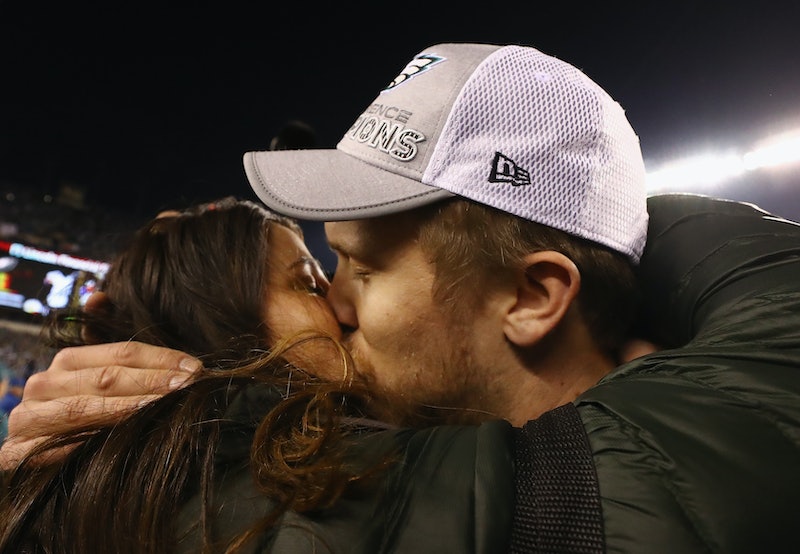 Move over Tom Brady and Gisele Bundchen, there's a new Super Bowl It couple in town. Philadelphia Eagles quarterback Nick Foles and his wife Tori Moore are getting ready to pull at your heart strings this 2018 Super Bowl Sunday, when the Eagles face off against the New England Patriots. And they've got something special about them: a great meet cute story. How did Nick Foles and Tori Moore meet? Well, like most couples you envy, they met in college, and, yes, their story only gets more sickeningly sweet from there.

Long before he was on the cusp of bringing Philadelphia their first ever Super Bowl win, Foles was a high school basketball and football player, who had already suffered one major injury before graduation. After committing to Arizona State for college, Foles had a change of heart, heading to Michigan State instead. Alas, fate had other plans for Foles, who ended up transferring to Arizona after one year. It was then that he met Moore. "She was the first person I actually ever saw at the University of Arizona," Foles recounted in an interview with the Press of Atlantic City. "I was going to my [football] physical. I remember walking down the stairs and thinking, 'Wow, this might be the most gorgeous person I've ever seen.'"

Moore played volleyball for the Arizona Wildcats, and the athletes became close friends in college. It wasn't until school was over that they decided to give romance a try. "It was one of those things where at some point the good Lord took the shades off both our eyes, and we just started talking and it grew into something that was always there, but we never knew it. It's crazy," Foles told the Press of Atlantic City.

Foles and Moore married in 2014, but their trip down the aisle was far from a fairytale. After graduating college, Moore moved to Portland where she worked for Nike while Foles was drafted by the Eagles. The two committed to a long distance relationship — and that's when things got complicated. In 2013, Moore was diagnosed with POTS (Postular Orthostatic Tachycardia Syndrome), and in 2014 two spent an agonizing month at the Mayo Clinic getting a handle on her diagnosis. It was, to put it mildly, not exactly what dreams are made of, but despite the hardship, Foles looks back on their love story fondly. "We got engaged while we were at the Mayo Clinic. We got married at a court house two months later, 'cause we knew we were in for a run," Foles said at a press conference on Jan. 30, noting how inspiring his wife is. Three years later, in 2017, Foles and Moore welcomed their first child, Lily James Foles.

Fans might be able to catch a glimpse at the littlest Foles family member at the Super Bowl. At the press conference, the quarterback made it clear that his wife and daughter would be his main motivation going into the big game. "That's the most important thing... When I think about this journey and everything, and I get home and I get to see her. I get to see my wife," Foles said, via Yahoo! Sports. "I know that every time I step on the field, every single thing I do, there's going to be some days she looks and wants to know who her daddy was and what he did, and that gives you a little extra juice to go out here."

Foles added that, while he aims to win, having his baby daughter there helps take a bit of the pressure off. "I get to go home to her every night and no matter what happens, no matter if I play a horrible game, she loves me. She has no idea. We win the Super Bowl, she has no idea. She's going to love me no matter what." (Insert "aww" here.)

There's no denying that Foles and Moore are definitely #RelationshipGoals, but don't expect to see them sharing their personal lives in the media. Both have little to no presence on social media, though Moore does appear to have a private Instagram account. But, who knows, a Super Bowl win might just change all of that.