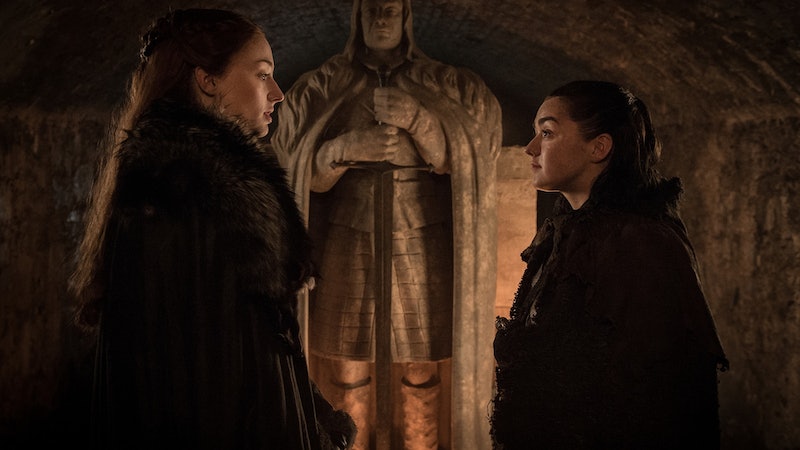 The Night King's power of raising the dead and turning them into White Walkers and wights is perhaps his most terrifying power, and his decision to bring the Army of the Dead back to life in the Battle of Winterfell was no exception. But how exactly did the Night King also raise the dead Starks in the Winterfell crypts?

Near the end of the Battle of Winterfell, after it seemed as if the Army of the Living had finally managed to turn the tide of the fighting and take down plenty of wights and White Walkers, the Night King raised all of the dead — both his army and the people in Winterfell who had been killed in battle — in order to make one last attack on the North. And while that was scary enough, things got even worse for the women and children who were hiding in the crypts, as the generations of dead Starks who had been buried there began to rise from their resting place and claw their way through the walls in order to attack the living.

Because those two instances happened one after the other, and since the zombie Starks seemed to stop attempting to kill the people of Winterfell after the Night King was murdered, it seems as if his ability to raise the dead extends to all instances of dead people, whether they were recently murdered or have been under the ground for years. And yes, that does mean that technically, Ned and Robb Stark were alive again during the Battle of Winterfell, though thankfully fans didn't have to see them attack Sansa (Sophie Turner) in the crypt.

In the weeks leading up to the Battle of Winterfell, many fans speculated that the crypts of Winterfell would play a major role in the fighting, though the most popular theory posited that the dead Starks would actually rise up from their graves and help Sansa, Jon and Arya fight back agains the Army of the Dead. Reddit user ZeCameos proposed that because the Starks believe that "there must always be a Stark at Winterfell," the family's loyalty to their home is so strong that it would inspire the reanimated corpses to fight on behalf of the living, and stop the Night King from attempting to destroy their castle.

While that, sadly, didn't turn out to be the case, it turns out that the dead Starks' rising once again was actually teased in George R.R. Martin's novels, as Jon had a dream in Game of Thrones that "the dead kings came stumbling from their cold black graves," when he was in the crypts. It turns out that Jon was right to be terrified of the possibility of his ancestors coming back to life, as the dead Starks immediately began attacking the residents of Winterfell, proving that anyone who the Night King brings back to life is automatically loyal to the Army of the Dead.

The Night King's ability to make the people in the Winterfell crypts come back to life might have been one of his most ingenious and evil moments in the Battle of Winterfell. While they all seemed to return to their previously dead state after the Night King was killed, as fans of Game of Thrones know well, what is dead may never really die — and now that we know that the Starks can rise again, anything is possible.