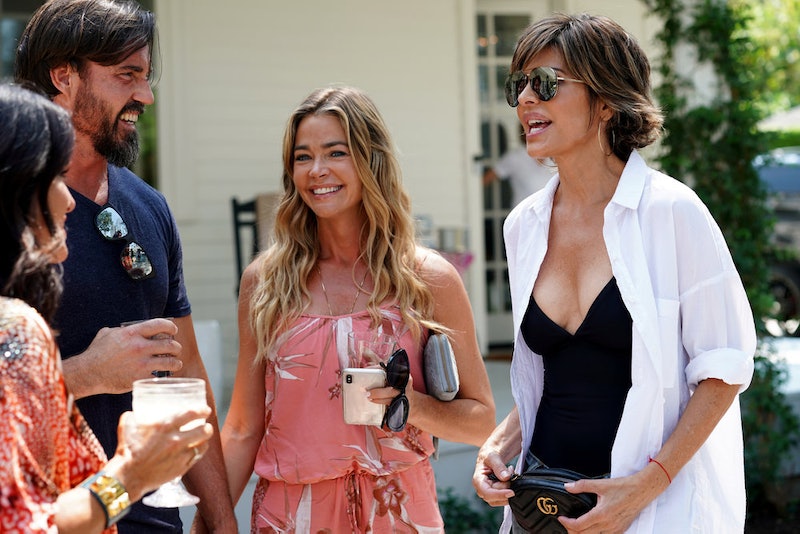 Life isn't all diamonds and rosé on Real Housewives of Beverly Hills. There's also a lot of drama. It has to be so intimidating to be the new girl on the show. Thankfully, Denise Richards has been close with veteran cast member Lisa Rinna for years. So, how do Denise Richards and Lisa Rinna know each other? They actually go way back. The Real Housewives of Beverly Hills duo discussed the origin of their friendship when they spoke to Interview Magazine in a Feb. 12 interview. Interestingly enough, they are both a little bit unclear on when they actually met.

Denise admitted, "Our paths have crossed many, many times over the years. I don’t even know if we remember how we actually met." Lisa chimed in with, "I remember I was with Wilhelmina models in Los Angeles, and I saw your card in the agency. I thought, 'Who is this gorgeous girl?' I think you were 16 at the time. That’s the first time I remember seeing you." But when did they actually interact? Neither of them seems to know for sure.

Lisa was just as confused about the start of their friendship when she discussed it during her February appearance on Live With Kelly and Ryan. She said, "I've known Denise, we think, for like twenty five years." Rinna added, "I met her when we were modeling back one hundred fifty years ago." She didn't share any specific details about their meeting, but Lisa did declare, "We've been around the block."

Aside from their modeling past, these two are both actresses. Lisa and Denise both appeared on Melrose Place, with Lisa playing Taylor McBride from 1996 to 1998, according to the show's IMDb page. Denise appeared on three episodes of the show in 1996, but this was right before Lisa joined the show.

However, they did eventually work together on the 2001 movie Good Advice with Denise's ex-husband Charlie Sheen. Yes, that is the movie where he licked Lisa's toes that she mentioned during the Season 9 premiere episode.

Speaking of some good advice, in their February interview with Interview Magazine, Lisa and Denise discussed taking their friendship from reality to reality television. Lisa admitted,

"It is very difficult to be the new girl, and I didn’t really have anybody to give me any advice when I came on the show. I really felt it was important to tell Denise everything I possibly could to prepare her for this really mindf*cking-crazy ride. And that’s just the truth."

Denise responded with, "This is why I love her." Lisa told the magazine, "I won’t tell you what I told her. It’s kind of secret, but I told her everything." Denise added, "I’m grateful that Lisa was very forthcoming, and so supportive, and an amazing friend by giving me some very private tips."

During a March interview on Live With Kelly and Ryan, Denise discussed one of those tips that Lisa gave her. Denise said, "Lisa Rinna has been giving a lot of advice. Little secrets, but one thing that she did say was to keep notes after every episode because of when we tape the reunion." That's some good advice. It's always smart to show up to a reunion taping with some receipts.

No matter how they actually met, Denise and Lisa have been good friends for a long time. Now, their friendship is facing the biggest test of all: filming a season of Real Housewives of Beverly Hills. Now, they just need to get through Denise's first reunion taping. Let's hope Denise familiarizes herself with those notes.