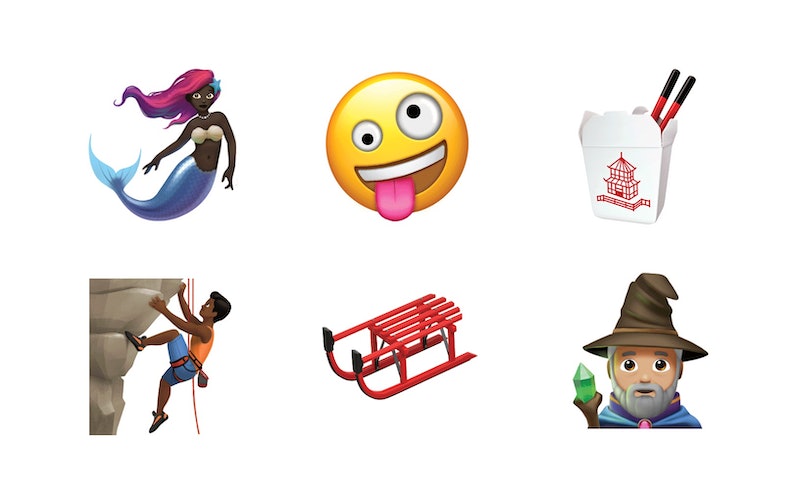 If you're like most Millennials, you pride yourself on being able to communicate exclusively with emoji. So, the news that an iOS 11.1 emoji update is coming down the pipeline is pretty exciting. If you're wondering how to get the new iOS 11.1 emoji the good news is that the iOS 11 emoji beta launches next week, and you can sign up for it. However if you're not into beta testing, you might have to be patient until the official release.

Apple released its iOS 11 update in September, and if you haven't downloaded the update yet, it's totally worth it. New features like the ability to drag and drop multiple apps, the "Dark Mode" setting, Do Not Disturb While Driving, an upgraded and totally boss App Drawer, Screen Recording, live FaceTime videos, and Emergency SOS make the iOS 11 the best and most comprehensive iPhone update in recent memory.

And, it's about to get even better with the forthcoming iOS 11.1 emoji update because, according to Apple, the new emoji are designed to reveal every character detail. "Hundreds of new emoji, including more emotive smiley faces, gender-neutral characters, clothing options, food types, animals, mythical creatures, and more, are coming to iPhone and iPad with iOS 11.1," Apple reported.

The new emoji are adapted from approved characters in Unicode 10. iOS 11.1, and will also include characters announced on World Emoji Day. This includes Woman with Headscarf, Bearded Person, Breastfeeding, Zombie, Person in Lotus Position, and new food items such as Sandwich and Coconut. Also included in the update is the Love-You Gesture, designed after the “I love you” hand sign in American Sign Language, according to Apple.

If you simply can't wait for the iOS 11.1 emoji update, you can sign up for the beta, which launches next week. iMore posted a step-by-step guide that walks you through how to download the public beta to your iPhone or iPad so you can give your friends major FOMO by sending them the new emoji because, seriously, you need these mythical creature emoji right now.

It's no secret that communicating via emoji is the preferred method for many people, and Wired reported that there is actually an evolutionary reason for this. "The ascent of emoji has been astonishing. In Gavin Lucas's The Story of Emoji, the linguist describes emoji as the fastest-growing language of all time," Tom Vanderbilt reported. "For instance, when emoji were added to the iOS keyboard in 2011, about 10 percent of Instagram posts contained emoji; that figure is now north of 50 percent. As a study by the Georgia Institute of Technology found, emoji even seem to be crowding out their more primitive cousins, the emoticons, based on an analysis of Twitter usage."

The reason for the emoji uptick is because visual communication is a universal language, and many people feel more comfortable expressing themselves visually — especially when they are unable to read the facial cues of the people they are communicating with. Adding emoji to a text can convey happiness, sarcasm, or even anger for the same set of words.

Without emoji, if the recipient can't see your face, your actual meaning could be misinterpreted. Essentially, emoji help us reduce misunderstandings. "Communicating online is like being in a car and trying to talk to other drivers," Vanderbilt wrote. "Without time for lengthy formalities, generally unable to see each other's faces, we use gestures — a wave, a flash of headlights, a sounded horn."

Who knew how important emoji were to modern communication? This makes me want to download this update ASAP. However, for those of us who aren't techie enough to check out the iOS 11.1 emoji public beta, it's a bit of a waiting game as Apple has not yet announced an official release date. But, it's always nice to have something to look forward to.