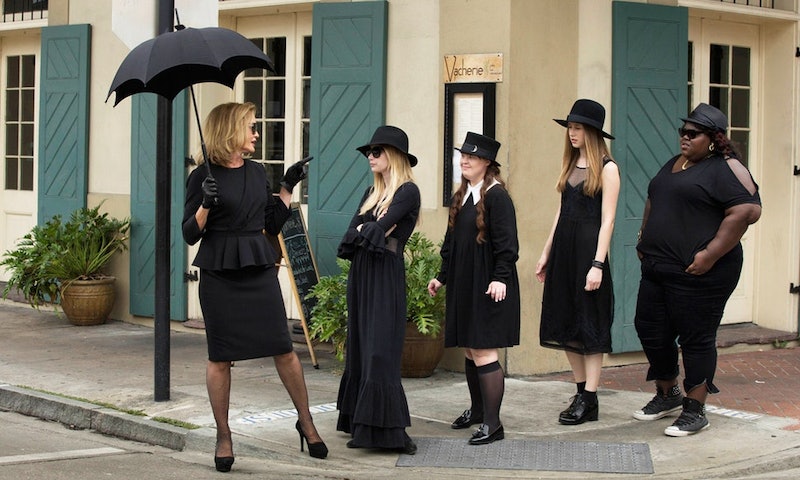 It's been a long time since fans have checked in with the witches from AHS: Coven, and while none of the members of Miss Robichaux's Academy for Exceptional Young Ladies popped up during the Apocalypse premiere, the crossover event ensures they'll find their way into the story eventually. But how does AHS: Apocalypse connect to Coven, exactly? The witches may not have made a physical appearance yet, but one theory that's quickly gaining traction among fans suggest that they have been mentioned already — you just may not have noticed it.

Throughout the episode, there were multiple mentions about a mysterious organization known as the Cooperative, who consist of 12 of mankind's greatest minds who are dedicated to overseeing the survival efforts of what remains of the human race. Little else is known about the Cooperative and the only person we've met who claims to be a member of the organization is Michael Langdon, who serves as an important connection to Murder House. So who else is part of this elite group of people? Many viewers took to Twitter by the end of last week's premiere to suggest that perhaps the Cooperative are actually made up of the Coven witches that managed to survive Season 3.

If you stop for a second and think about it, this prediction actually makes a lot of sense. When the world is on the brink of nuclear destruction, who better to try and rectify the situation than a group of people who possess actual magical powers. Judging by the way both Wilhemina Venable (Sarah Paulson) and Miriam Mead (Kathy Bates) talked about the Cooperative, this group also sounds like the type of people you don't want to mess with or defy in any way. It's safe to say no one would ever want to get on the Coven's bad side, so perhaps these two impressive groups are one and the same.

Given Michael Langdon's affiliation with the group, it would also be a nice way to tie both of the Murder House and Coven worlds together in a way that makes sense. (Well, as much sense as one can make on any season of American Horror Story.)

Based on a photo that Ryan Murphy himself tweeted, we know for a fact that most of the witches from Coven will be returning. This includes Paulson as Cordelia Goode (aka the newest Supreme), Stevie Nicks as herself, Lily Rabe as Misty Day, Emma Roberts as Madison Montgomery, Taissa Farmiga as Zoe Benson, Gabourey Sidibe as Queenie, and Frances Conroy as Myrtle Snow. That's seven witches who could be making up more than half of the 12 members of the Cooperative. (Sure, some of them are supposed to be deceased, but in the world of AHS anything is possible.)

Perhaps the special shelter Michael Langdon is offering to select members of Outpost 3 is actually Miss Robichaux's Academy, which is where we'll run into the witches again. Granted, this is all just mere speculation. It's just as possible that we'll come across these Coven characters in a completely different way. Everything should become much more clear in the weeks to come.