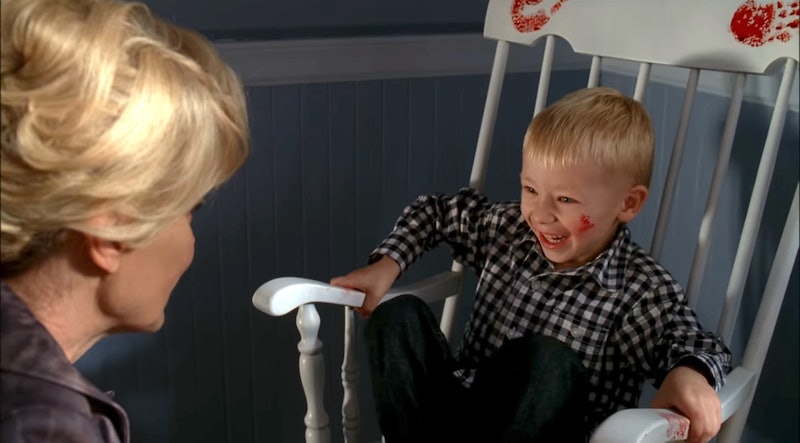 What better entity to cause FX's Apocalypse than the Antichrist? That's what Ryan Murphy figured for the Murder House and Coven crossover of American Horror Story. In Season 8, the evil baby from American Horror Story Season 1 is all grown up and will play a major role in the destruction of the world. Murphy announced via Twitter in July that Cody Fern will play Michael Langdon, who was just a toddler at the end of Murder House. And before he terrorizes the survivors of the Apocalypse as Season 8 premieres on Sept. 12, here's a refresher on where he comes from.

When the name of the Murder House and Coven crossover season was announced as Apocalypse, the reveal came with a photo of a blood-covered baby, being touched by a black, Rubber Man-like hand. Judging that image alone, it sure seemed that baby Michael Langdon could be behind the Apocalypse of Season 8. And just a week later, Murphy confirmed that this demon child would be a character. The AHS co-creator wrote on Twitter that Fern, who most recently played David Madson in Murphy's The Assassination of Gianni Versace: American Crime Story, would portray the adult Michael Langdon. (Not to be confused with actor Michael Landon, who played an angel in Highway To Heaven — a far cry from the Antichrist in AHS.)

Michael was conceived back in the very first season of AHS, which premiered seven years ago in 2011. The Harmon family had moved into the titular Murder House (although the season wasn't named that when it premiered) to save their family. Vivien (Connie Britton) had recently had a miscarriage and her husband Ben (Dylan McDermott) had cheated on her with Hayden (Kate Mara). However, they found more evil than they had bargained for, in particular due to the new friend that the Harmons' disgruntled teenage daughter Violet (Taissa Farmiga) made — Evan Peters' Tate Langdon.

Unbeknownst to the Harmons, Tate was really a ghost. He had committed a school shooting years earlier and was killed by the authorities. As a ghost, he had befriended other spirits of the house, including Nora Montgomery (Lily Rabe), who desired a baby. So one night, dressed in the black bondage suit, Tate had sex with Vivien in order to give Nora the baby she wanted. Ben and Vivien had sex earlier that day, so Vivien believed that this "Rubber Man" was her husband. But later, Vivien discovered she was pregnant with twin boys — fathered by two different men. And one of those men just happened to be a dead murderer.

The technician who first conducted the ultrasound on Vivien warned her that she was pregnant with the Antichrist. After quitting her job, the ultrasound tech agrdes to meet Vivien in a church and told the expectant mother, "I saw the unclean thing, what you carry in your womb. The plague of nations, the beast." But the true nature of this child was further revealed by medium Billie Dean Howard (Sarah Paulson).

Concerned about what her son has done, Tate's mother Constance (Jessica Lange) asked Billie Dean, "What happens when a human copulates with someone from the spirit world?" Billie Dean explained that when a new pope is elected, he must open a box that contains a paper that reveals "the secret of the end of the world." According to Billie Dean, "This piece of paper reveals the precise nature of the Antichrist. 'A child born of human and spirit will usher in the end of times.' It is the essence of evil. A perversion of the immaculate conception."

Vivien gave birth to the twins in the house, but Ben's child was stillborn and Vivien died. That left only the baby fathered by Tate to survive. Ben tried to raise the child on his own, but he is killed by the other ghosts in the house. And while a dead Hayden wanted to keep the demonic baby for herself, Constance took custody of her grandson. Ironically, Constance called Michael a "little angel." And the child was most likely named after the archangel Michael, who hurled the devil down to Earth in the Book of Revelation, as Leah recounted to Violet.

At the end of Season 1, the ghost Harmon family were happily haunting the Murder House, complete with their son and godmother Moira (Frances Conroy). In the land of the living, Constance had been raising Michael for three years. She told her hairdresser how she planned to guide her grandson — "this child, a remarkable boy, destined for greatness." But when she returned home after getting her hair done, Constance found that Michael had murdered his nanny. Constance lovingly scolded the blood-covered toddler, "Now, what am I going to do with you?" as the Twisted Nerve theme song that Tate used to whistle played in the background. And based on the previews of Apocalypse, it looks like grandmother Constance raised Michael to reach his full Antichrist potential.

Britton, McDermott, Peters, and even Lange all reprise their Murder House roles for Season 8, so Apocalypse will show even more of Michael's origin story. But before embarking on the latest AHS season, know that this murderous toddler has fulfilled his evil destiny and caused the "apocalypse."