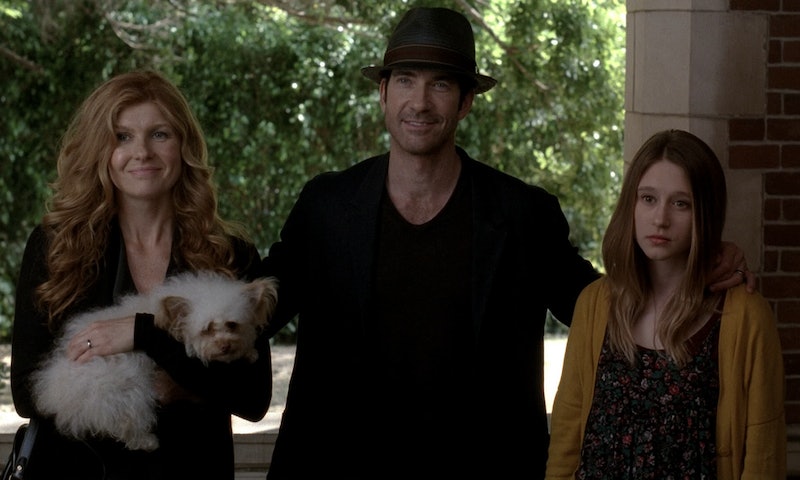 American Horror Story: Apocalypse kicked off last week, and given the fact that the season will serve as an epic Murder House and Coven crossover event, fans were eager to put on their detective hats and see how these storylines are going to merge together. And while a majority of the episode was dedicated to introducing new characters, it eventually became clear exactly how AHS: Apocalypse connects to Murder House for this latest Ryan Murphy creation. Well, at least one way that it connects, and it's a pretty important one.

Near the end of the hour, a visitor arrived at Outpost 3 by orders of the Cooperative, an mysterious organization dedicated to the survival of the human race in the event of a nuclear attack. (Or so they say.) This visitor turned out to be none other than a grown up version of Michael Langdon, played by Cody Fern. For those who perhaps need a refresher on this character, Michael was conceived during the days of Murder House, when Tate Langdon (Evan Peters) sexually assaulted Vivien Harmon (Connie Britton) while dressed as Rubber Man. At the time, Vivien thought the man under the latex costume was her husband, Ben (Dylan McDermott), since they had just had sex earlier that same day. This resulted in Vivien becoming pregnant with twins, fathered by two different men — one being Ben, and the other being Tate.

Later on in the season, Tate's mother Constance (Jessica Lange) spoke about what her son did with a medium named Billie Dean Howard (Sarah Paulson), who shared her thoughts on what this child would most likely become: "A child born of human and spirit will usher in the end of times. It is the essence of evil. A perversion of the immaculate conception." In other words, she predicted Michael would be the antichrist, which makes his presence in Apocalypse very telling. How did he become a member of the Cooperative, and is he really working for them or is it the other way around?

These are all questions that are sure to be given answers as the season progresses, but based on what we've seen so far, it appears that Michael will be the direct link to all things related to Murder House. However these new characters come across the likes of Vivien, Ben, Violet, Constance, and Tate, odds are Michael will be involved and serve as the puppet master of their fates.

As of now, Michael is the only character from Murder House that has popped up in Apocalypse, but we know there are many more to come. The premiere simply laid the groundwork of where the plot is going, but expect to see a lot more connections to Murder House as the season unfolds. In the meantime, though, Michael is quite enough for fans to concern themselves with. Is he every bit the antichrist Billie Dean Howard predicted him to be? Will he be the one to welcome us back to Murder House? Michael mentioned taking select members of Outpost 3 to a "sanctuary" that'll help ensure their survival. Perhaps he's referring to his birth place. Hopefully the Purples don't mind bumping into a ghost or two.