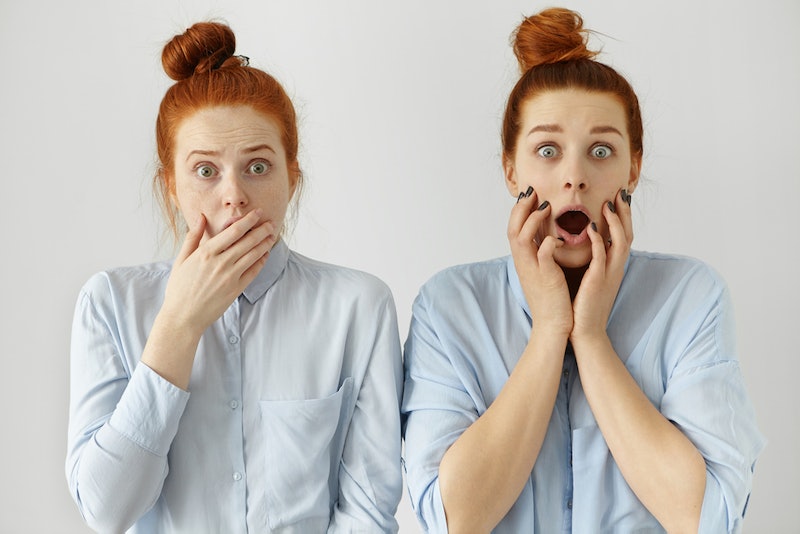 As a child growing up on a steady diet of solid '90s twin content (Sister, Sister; The Parent Trap; and all things Mary Kate & Ashley, to name a few), it's pretty safe to say that I've spent most of my life enthralled with the concept of being a twin. I do have a beloved sister who I sometimes pretend is my twin, and that's a pretty close second, but we've both agreed that being an actual twin probably tops it. Just the notion that two people could share so much— a womb, DNA, and most importantly, a birth chart — is beyond fascinating to me. Which, of course, leads us to the mind-boggling question of exactly how astrology works for twins. I mean, twins are separate individuals, but do identical twins also have the exact same birth chart? Like, how on earth does this work?

Well, just as two people with identical DNA can express themselves very differently (even identical twins have their differences!), so can two people with identical birth charts. But first thing's first: Not all twins are going to have fully identical birth charts in the first place. That all depends on the exact time of birth for each twin, and the amount of time that passes between the first and second birth. Some astrological placements do move rather quickly — rising signs, for example, move one degree approximately every four minutes and move into a completely new sign about every two hours, so there's always a reasonable possibility that twins will have different ascendants. And depending on what degree a planet is in at any given moment, even the slower-moving ones could be affected by just a few minutes' difference in birth time and move into a different house of the zodiac, which will obviously change some areas of life for that twin.

But if the above isn't the case, and a set of twins does, in fact, share a virtually identical birth chart (which isn't uncommon — especially with twins born only a minute or so apart), does that mean they'll have the exact same personality? Bustle spoke with astrologer Lisa Stardust and got her take: "Let’s look at famous twins Ann Landers and Abigail Van Buren: both of them had the same public role and even the same job (writing advice columns)," shares Stardust, who cited other famous twin examples as well. "These individuals have similar interests and have similar time lines for major life events." And it's true — not only did aforementioned twins Landers and Van Buren both share the same highly specific line of work, they also reportedly had similar interests, attended the same college, and got married on the same day in a double ceremony. So a shared birth chart will certainly make two people, well, extra similar.

But in many cases, twins — even those who share a fully identical birth chart — actually have quite different personalities and interests. But how, if all their signs and placements are exactly the same? Some astrologers theorize that even if twins share an identical birth chart, it's likely that they will express different aspects of their charts more strongly than the other. "[Twins] 'divide' the chart between them early in life. If they live and grow up together, they cannot both enact the same roles (which are part of both their personalities) but tend to choose different roles," explained astrologer Liz Greene on Astrodienst. "Often, the 'alpha twin' is stronger and makes his/her choice, leaving the rest to the other." She also notes that these roles and expressions can evolve throughout the twins' lives, and that it's really only in twins who are raised together that a chart's traits get split up in this way. That's because twins who have been raised separately are less likely to feel the inherent need to differentiate themselves from their twin, and will likely embody their chart in the same way that an individual non-twin would. Stardust echoes this, explaining, "At the core, [twins sharing a birth chart] will be the same. However, they will try to assert their individuality and grow in order to have a more refined sense of self." For example, in some sets of twins, one might identify more with their moon sign while the other may more fully embody their sun sign. It's a balance.

And not only can identical twins naturally split up dominant placements in their shared chart, they can also manifest the very same placements in unique ways. "There is a natural instinct to differentiate oneself that unconsciously motivates one twin to choose a certain type of expression of a planet in the chart, while his or her sibling chooses another," explained Tarot.com. So the exact same planetary placement in one person may manifest with different traits than in another person — different sides of the same coin. "[P]eople can use the higher and lower vibration of planets, aspects, and transits, as well as the higher and lower vibration of their natal astrology chart," explains Stardust. "You can see someone who has a Sagittarius ascendant be very cultured or be very brutish. This energy manifests based solely on the individuals experiences, which only they can feel, regardless of their twin sibling."

All of this appears to account for personality differences in Western astrology, but in other systems such as Vedic astrology, for example, even a few seconds can make a big difference when it comes to a person's astrological destiny. Some uses of the divisional chart of Shashtyamsha apparently require a person's accurate birth time down to the millisecond — and this would certainly differ between twins (assuming anyone has ever obtained their birth time in milliseconds in the first place — fully fascinated, if so). In the end, everyone's different — and whether you blame it on nature vs. nurture or a five-minute difference in birth time, it appears to be true. Even for twins!