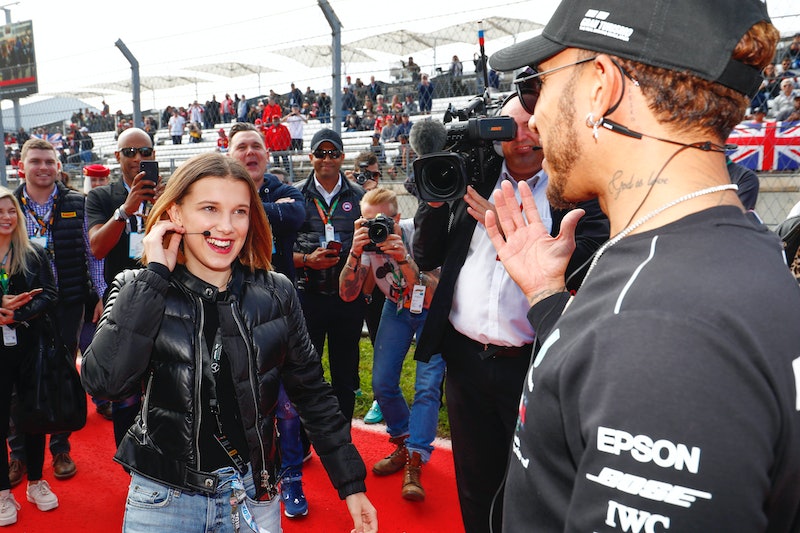 The world is full of unlikely combos (ham and pineapple, anyone?), however, one of the most surprising link-ups seen in recent years is the budding friendship between actor Millie Bobby Brown and Formula one superstar Lewis Hamilton. Now, the British racing driver isn't the first A-List friend of the Stranger Things star, but how do Millie Bobby Brown and Lewis Hamilton know each other?

Well, the origins of this celebrity friendship aren't entirely clear, therefore I have reached out to Brown and Hamilton's representatives for comment, and will update with any new information once it becomes available. However according to the Metro, it could be assumed that the pair first crossed paths at the 2018 United States Grand Prix in Texas — because the celeb pals were spotted hanging out prior to Hamilton's big race. After getting behind the wheel of the Formula One star's yellow Mercedes, the duo posed for several photos on the pit lane, which later prompted Brown to upload an adorable selfie with the racing driver champ on social media.

In a caption posted on Instagram, the Stranger Things actor said, "That was the craziest 3 minutes ever… @lewishamilton goodluck today! Loved listening to some tunes while doing donuts in the coolest car ever! Sending my love."

Brown and Hamilton's encounter at the 2018 United States Grand Prix was captured in a video for the official Formula One Youtube channel, and in the video, the young actor takes to the track with the British champion for a thrilling lap of the Circuit of the Americas.

As mentioned previously, Hamilton is not the first big name to strike up a friendship with Brown, because as reported by NME, last year the actor revealed that she'd built a good relationship with none other than Canadian rapper Drake. In an interview on the 2018 Emmys red carpet, Brown said of their friendship, "We just texted each other the other day, and he was like, 'I miss you so much,' and I was like, 'I miss you more'." She went on to describe the "Hotline Bling" rapper as "a great friend and a great role model."

However, due to an obvious age-difference, the comments were met with some backlash on social media — which later caused the Stranger Things star to speak in defence of her friendship with the Grammy Award-winner. According to NME, she said, "I’m lucky to have people in the business extend their time to help me further my career and offer their wisdom and guidance. I’m very blessed to have amazing people in my life. U don’t get to choose that for me. It’s nice to have people who understand what I do. Now get back to talking about real problems in this world other than my friendships… jeez."

When she's not rubbing shoulders with the showbiz elite, you can find Brown on Netflix's sci-fi spectacular Stranger Things. The brand new third season is now available to stream on the platform, and if you haven't done so already, what are you waiting for?