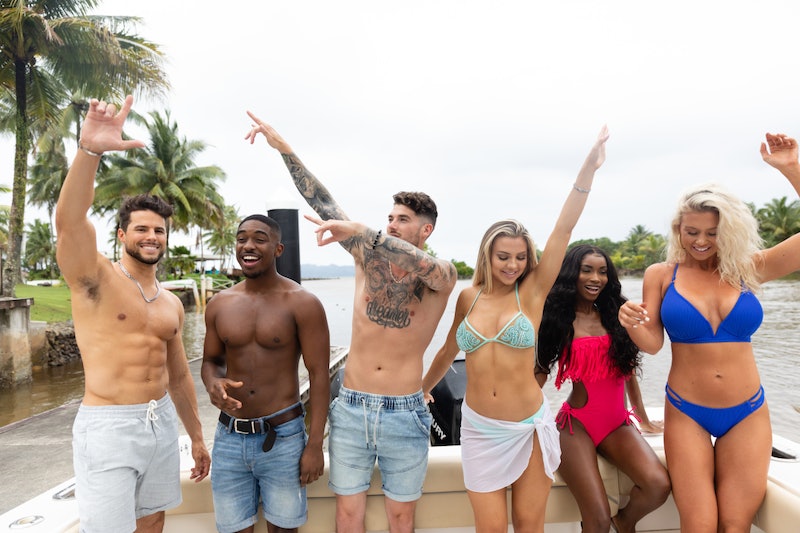 Watching Love Island requires a glossary sometimes: simple phrases like "re-coupling," "hideaway," "villa," and "vibes" have taken on a whole new meaning with the CBS reality dating competition and Week 3 introduced another new concept, with the arrival of the "Love Liner" boat in Love Island, carrying six new people. So how does this ship work? It can change everything about the series.

On July 22, the Love Liner ferried in a half dozen singles to the villa and they instantly shook things up in a major way. Those six new Islanders are: Aissata Diallo, Eric Hall, George Johnson, Kelsey Jenkins, Marli Tyndall, and Ray Gantt. The girls, and slightly more-so the boys, wasted absolutely no time getting to know them. Even the most solid couples on Love Island are in danger.

This could be the mild American version of "Casa Amor" on the original Love Island — a secret second villa where half of the current cast can be whisked away to couple up with new Islanders, thus disrupting their current relationships. It was introduced as a twist in the third season of the U.K. series and now has become a stable. When you go to Casa Amor, not only do you have to share a bed with a stranger again, but your partner back at the villa could be shown the footage of what you're getting up to with said new person at any minute. Like the Love Liner, Casa Amor is an easy way to bring in larger groups.

For now, the Love Liner is way less dramatic than the Casa Amor, even if it sorta kinda served a similar purpose. The boys and girls were only separated for a few hours, during which they met the new recruits. The new cast just arrived by boat. Nobody is staying on the boat. However, as Yamen pointed out to the shockingly flirtatious Zac, girls still talk! That's actually not fair to the girls — boys talk too — and secrets don't last long at the villa. You don't need Casa Amor's cameras to get caught stepping outside of your couple.

For all we know, this "Love Liner" may not even be a recurring feature on Love Island US — it could just be a clever nickname and an excuse for a dramatic entrance. Maybe the producers and crew just wanted to go for a boat ride. Maybe it'll be used for one-on-one dates later this week.

However, the arrival of the Love Liner and these new folks means bad news on the horizon as well. There are a limited number of beds at the Love Island villa. There's not nearly enough room for six new people to stay around, even after Michael and Christen were dumped. So, warranting a guess, it seems likely that Love Liner is still docked and ready to take Islanders away as soon as they came.

How many of the six new Islanders will stay? We're just going to have to keep watching Love Island to find out. Hopefully, they can sneak in a joy ride or two on the Love Liner before it returns to whence it came.