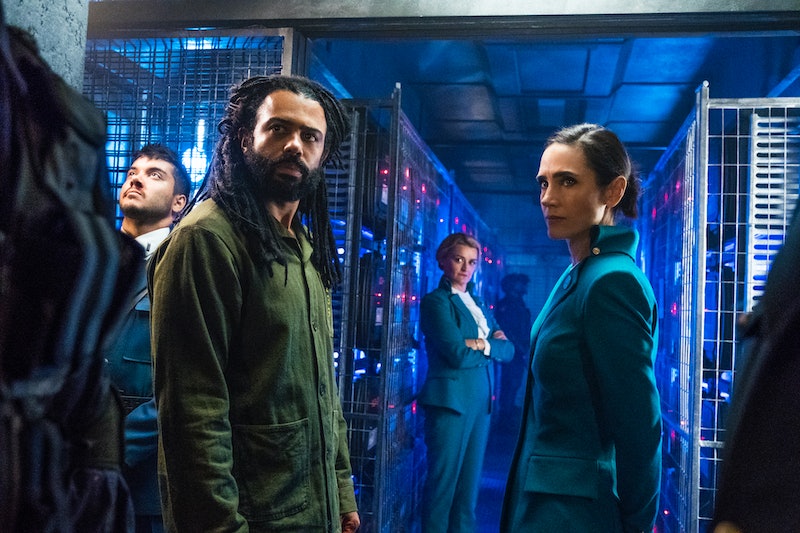 Justina Mintz/TNT
By Jefferson Grubbs
May 17, 2020

When TNT's new sci-fi series barrels onto the tracks on Sunday, May 17, viewers might find themselves facing a familiar-feeling dystopia. That's because the series was a movie first, one that was released in 2013 to much critical acclaim. But how does Snowpiercer the TV show connect to the movie that inspired it?

Both fans of the film and those uninitiated in its weird and visceral pleasures are likely wondering the same thing. Those who have already seen the theatrically released version of the story will want to know how this new take intersects with the characters and storylines they're already familiar with. And those who haven't watched the OG Snowpiercer yet probably want to know how much prior knowledge they need going into the new series.

When the Snowpiercer film debuted in theaters, it was the first time many Americans experienced the filmmaking of acclaimed South Korean auteur Bong Joon-ho (Memories of Murder, The Host). It was his English-language debut, and starred recognizable Hollywood talent like Tilda Swinton, Ed Harris, Octavia Spencer, and Captain America himself, Chris Evans. Seven years later, Bong is the toast of Tinseltown: he's the Oscar-winning director of Parasite, a universally beloved film that netted him statuettes for Best Picture, Best Director, and Best Original Screenplay.

That makes the timing of TNT's adaptation fortuitous — if admittedly accidental. The Snowpiercer series was first announced in 2016, several years before Bong would become an Oscar-minted sensation. Back then, the show was set to be written by Josh Friedman (Terminator: The Sarah Connor Chronicles) and directed by Scott Derrickson (Doctor Strange). For years, the project was shuffled between TBS and TNT, creative talent came and went. Now, the version arriving onscreen in 2020 is shepherded by Orphan Black creator Graeme Manson.

Needless to say, Chris "America's Ass" Evans is a bit too famous for a TNT show, so the original cast of the movie has been replaced, although the roster of talent is still impressive. Oscar winner Jennifer Connelly (A Beautiful Mind) stars as a first class passenger of the post-apocalyptic train, alongside Tony Winner Daveed Diggs (Hamilton), and prestige TV veteran Alison Wright (The Americans). The show has already been renewed for a second season well ahead of its series premiere, with TNT proudly announcing that Game of Thrones alum Sean Bean will join Snowpiercer's sophomore outing.

But are Connelly, Diggs, and co. playing new versions of the character played by Swinton, Evans, and the rest? Is TNT's Snowpiercer an episodic adaptation of Bong Joon-ho's feature film? Is it a prequel that will lead up to the events of that movie? Is it a sequel, picking up after it left off? (Unlikely, considering that the movie ended with — spoiler alert — the train derailing and killing nearly everybody on board.)

None of the above, as it turns out. The new Snowpiercer is a complete reboot of the story, inspired by the ideas from Bong's film (and the 1982 graphic novel that film was based on) rather than a direct adaptation.

"We stand alone," Manson told the crowd at his show's San Diego Comic Con panel in August 2019, as reported by Screen Rant. "It goes back to one of the post-scripts of the graphic novels, [the author] said there are as many stories to tell on Snowpiercer as there are trains to circle the Earth. I like that, I think… that sounds like a franchise. So we'll do one here, and then who knows, another train could start up sometime."

Not only is TNT's Snowpiercer not a direct adaptation of Bong's film, it appears it takes place on a completely different train than that of the movie. (Still, there are clear similarities between the two projects, as fans of the film will notice, such as a scene in the show's trailer where a misbehaving passenger is punished by having their arm stuck outside the train into the freezing cold air.)

Still, the last sentence of Manson's statement is intriguing. "We'll do one here, and then who knows…" Does this mean TNT's Snowpiercer will be an anthology series? Is Season 1's plot a self-contained story, with the show potentially rebooting itself on a completely different train in Season 2? If so, is it possible that the show will eventually become a prequel to or adaptation of or sequel to Bong's film? Even if Season 1 doesn't get there, it's possible that, if it chugs along long enough, this Snowpiercer will catch up with the one that gave it life.