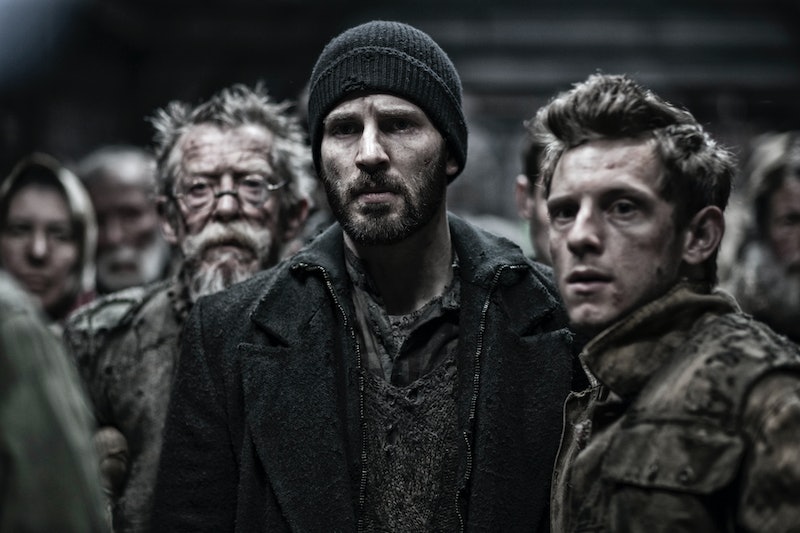 When it comes to genre TV, horror and fantasy shows are having a serious moment. Sci-fi shows? Not so much. All that could change, though, now that the 2013 feature film Snowpiercer is being adapted for TV. According to The Hollywood Reporter, Josh Friedman ( Sarah Connor Chronicles , Emerald City ) is set to write the pilot for Tomorrow Studios. The show doesn't have a network yet, but if it is picked up it could be the sci-fi show you have been waiting for since Battlestar Galactica ended plunging sci-fi television into a veritable dark age.

The 2013 movie starred Chris Evans and Tilda Swinton, and told the story of a globe spanning train — the Snowpiercer — that held what was left of humanity after attempts to stop global warming backfired, resulting in an ice age. The train was separated by class with the wealthy and influential passengers in the front cars while the lower class passengers were left in the rear cars where they were given nothing but disgusting protein bars to eat. Also, they routinely had their children stolen. It wasn't a good environment. Director Bong Joon-ho infused the story with environmental concerns, political allegories, and nightmarish examinations of human nature. The film was a hit with fans of intelligent sci-fi and its themes are perfect for a long-running drama to explore.

It's time for TV to find its next great sci-fi show and here are eight reasons why Snowpiercer could be it.

1. The Setting Is Brilliant

A train that runs on a perpetual motion engine and spans the entire globe is the kind of setting that offers endless possibilities. The sheer number of cars and characters there would be to explore is mind-boggling. Despite the vastness, there would also be a sense of claustrophobia. All of humanity is contained in this one train and that is a breathtaking concept to build a series around.

2. The Social Commentary Is On Point

At the heart of all great sci-fi is social commentary. Not only would the show tackle the issue of global warming (and the possibility of over-correcting the problem), it would also delve deep into class systems. The train becomes a microcosm of society where the poor are oppressed and used for the betterment of everyone else's lives.

3. The Rebellion Could Build Over Time

In the movie, the rebellion escalates quickly, but with a TV series, a slow boil would be key. Watching the growing unrest of the passengers at the end of the train and expanding on the political agenda driving the class separation could be drawn out over the course of a season or more. Likewise, the journey to the front of the train could take an entire season if done correctly.

4. There Would Be A Horror/Mystery Element

Crossover appeal is everything, and I love the hard sci-fi premise of Snowpiercer. The story has a built in mystery and horror aspect that relies entirely on science and the darker side of human nature. There's nothing supernatural here, just the cold hard truth of what humans are capable of at their worst.

5. The World-Building Is Expansive

Without giving too much away, the movie opened the door for expansion of the story beyond the train. While the show could spend multiple seasons exploring life on the train, the writer's would not have to limit themselves, location wise.

6. The Government System Is Ripe For Commentary

Politics in the world of Snowpiercer are over the top and corrupt. Taking a pessimistic view on the state of the modern political system would only give the series more relevancy. A sci-fi show with something to say is always more compelling than one that is overly concerned with its own cool factor.

7. It's A New Kind Of Dystopia

A dystopian world built on the premise of good intentions gone wrong is fascinating. The idea that this entire situation began because of climate engineering designed to stop global warming adds another layer of unease.

8. The Cast Would Be Vast & Diverse

With a train housing the last of humanity as the show's setting, there would be no excuse for the show not to have a sprawling and diverse cast. Having lots of characters from different backgrounds is a major bonus and would only lend the story more authenticity.

If Snowpiercer finds a home, it could revive the sci-fi genre with ease. The concept is perfect for an ongoing series and in true sci-fi fashion it would present viewers with a funhouse mirror version of reality. I know I'm ready to board this train.