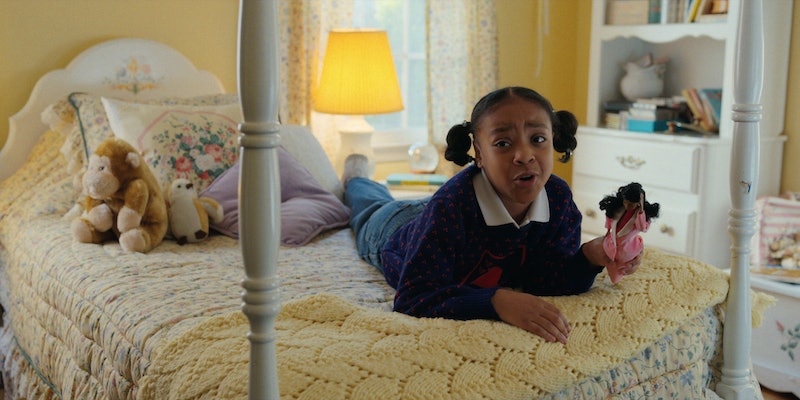 The Stranger Things kids aren't exactly what you'd call "cool." They love Dungeons and Dragons, playing with walkie talkies, and the idea of interdimensional travel — even if they don't like it so much in practice. And though in Stranger Things 3, Lucas' sister Erica uses every opportunity to tease her brother and his friends about how "nerdy" they are, in real life, star Priah Ferguson is proud to be a nerd. "I think everybody has like a little nerdiness in them. I have a little nerdiness in me," Ferguson, who plays Erica, tells Bustle. "Even the people who think they're too cool for school, I think they at least have a little nerdiness in them."

As Dustin discovers in Stranger Things' third season, that even includes nerd-hater Erica. "Holy sh*t. You're a nerd," he says when he realizes she can do complicated math problems in her head. He then lists all of the reasons why all this time, she's been a nerd too. "Fact one: you're a math whiz, apparently. Fact number two: you're a political junkie. Fact number three: you love My Little Pony." According to Dustin, My Little Pony is nerdy because it uses "standard nerd tropes" like centaurs, dragons, castles, and magic.

Some people are more nerdy than others, of course, and Ferguson told Hollywood Life that Gaten Matarazzo, who plays Dustin, is the nerdiest cast member in real life. "[I hope he doesn't] get mad or offended, but it would probably be Gaten. His personality matches up with his character … he has a little bit of quirkiness to him, which is fine. I have a little bit of quirkiness to myself," she told the outlet.

Based on the way Erica uses the word "nerd" in Stranger Things, you can tell it carried the weight of an insult back in the '80s — at least, according to the show. But watching in 2019, we can reclaim the term. It's cool to be nerdy because it just means you're passionate about something. Not everyone geeks out about the same stuff, but that's OK. Dustin and Erica may not be able to connect on her passion for politics, but they can share in their love for My Little Pony. Nowadays, modern technology allows people to connect over even the most obscure passions. There's always someone on social media who likes the same band, show, or video game you do that you can become virtual friends with. That may not have be an option for Dustin, but at least he has the D&D crew.

As for Erica, what started out as an insult ended up becoming a way for her to see that ultimately, she wasn't so unlike her brother and his friends. And after getting to say the line so much, Ferguson has love in her heart for her character's catchphrase. "I can say my favorite line would be 'nerd' to say, you know, because it's like really cool."

And if the nerd-hater herself says it's cool to be a nerd, you know it must be true.

More like this
Sadie Sink Almost Wasn’t Cast On 'Stranger Things'
By Frances Stewart
'Stranger Things' Star Jamie Campbell Bower Reflects On Being Sober For Over 7 Years
By Radhika Menon
Does 'Locke & Key’s Ending Mean There Could Be A Season 4?
By Sophia Moore
'The Sandman’s Ending Is A Departure From Neil Gaiman’s Comic Book Series
By Kadin Burnett
Get Even More From Bustle — Sign Up For The Newsletter