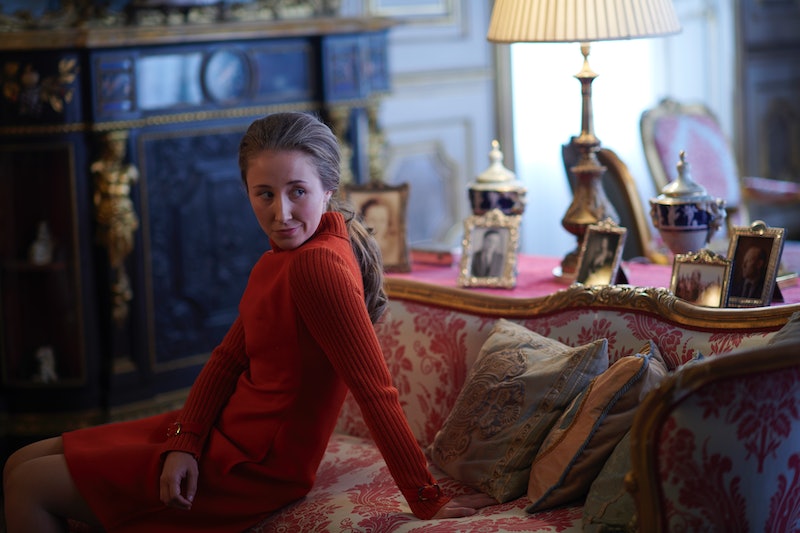 During an early scene in The Crown Season 3, Prince Philip's voice fills the grand rooms of Buckingham Palace as he beckons for his "sweetie" over the intercom. The Queen's private secretary assumes Philip is calling her, but it is instead their only daughter Princess Anne, who strides into her father's office fresh from horseback riding and braced for bad news. In an effort to increase their standing, he informs her, she will be "launched" into the public. "It all sounds hideous," she laments, "but if you and the other reptiles insist." The exchange marks only the first of many impudent one-liners Anne delivers throughout the season, but according to Crown star Erin Doherty, it serves as "pretty much the epitome of Anne."

"Basically, she's being told what she has to do and she will absolutely do it," Doherty tells Bustle. "But she's not going to do it without pushing back in some way and just questioning why exactly they have to do these things."

It's this attitude, the actress says, that makes Princess Anne so instantaneously memorable. She only appears sporadically throughout the third season, but when she does, she makes an impact; Twitter has already hailed her the MVP of the series, demanded a Princess Anne spinoff, and turned her into a GIF.

It's also what helped Doherty connect to Anne — and what distinguishes the character from the rest of the royal family. "If I were in her shoes, I'd approach it in exactly the same way," Doherty explains. "She has the ability to just be a normal human being in this really abnormal situation. And that's what makes you so drawn to her. She's reacting, I feel, as any of us would."

Doherty attributes this forthrightness to Anne being criticized for her looks by the press at a young age — since then, she says, she's become "really committed to the truth" — as well as her position in the royal hierarchy. While it's true that she doesn't have the same pressure on her as her brother Charles, that also can, at times, make her feel irrelevant. She comes off as having a hard exterior, but really she's just protecting herself.

That being said, her family frequently seeks out her advice, and she often acts as their voice of reason. "I think the family members do value her for what she brings and who she is and her ability to just stay really grounded in this really bizarre environment that they all seem to be struggling with in their own way," Doherty says. "She's just such a rockstar, I love her."

The Crown may be about an improbably wealthy family doing improbably sumptuous things. But at its core, it's about demystifying some of the most enigmatic figures in history, and Anne makes them feel more like real people than perhaps any other character. After all, at the end of the day, she's just a young woman singing along to David Bowie in her car — and having a "bit of fun" while she's at it.