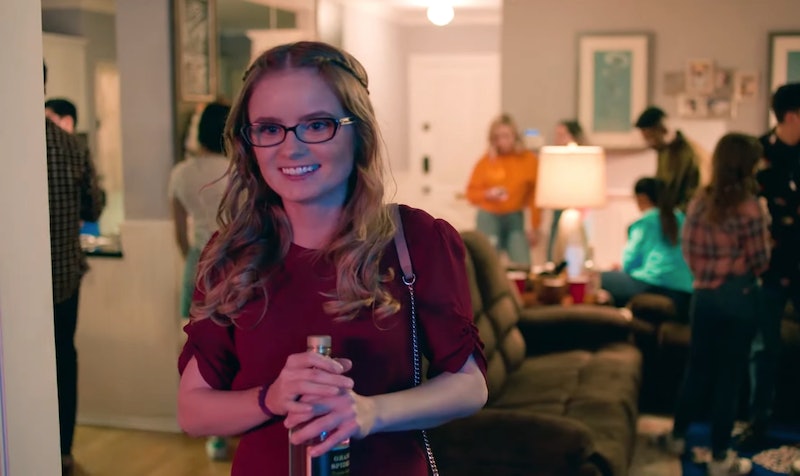 Spoilers ahead for Episode 5 of Everything's Gonna Be Okay Season 1. Depicting the murky gray area of sexual consent on a TV show is a complex task. But doing so through the lens of an autistic character is even more complicated. And yet Everything's Gonna Be Okay — a new Freeform comedy from Please Like Me's Josh Thomas — manages to do so with great nuance in one quietly powerful episode.

The series follows Nicholas (Thomas), an Australian 20-something who becomes the legal guardian of his two American teenage half-sisters after their father dies of cancer. One of the girls is Matilda, an autistic 17-year-old who's been exploring her budding sexuality. In the Feb. 6 episode, this culminates in her crush rejecting her at a house party, and Matilda subsequently getting drunk and propositioning his friend Zane to have sex.

Though we as viewers are able to see that Matilda was the one who initiated sex, when her younger sister Genevieve learns what happened, she immediately worries that Zane took advantage of Matilda and confronts him at school. The fact that Matilda was drinking and in a vulnerable headspace would be enough to raise questions about her ability to fully consent in that moment. That she is also an autistic person having sex with someone who is neurotypical only further blurs the line. "[There's a] really difficult balance ... between respecting the fact that this is a grown-up who gets to make their own choices, and making sure that they're not out there behind closed doors making choices ... where the other person has such an upper hand," Thomas tells Bustle.

Entering into a conversation about consent at this particular sociopolitical moment made Thomas nervous, but he felt it was important to portray because people with disabilities are often desexualized, and sex came up as a common concern among the parents of autistic children he spoke to while writing the show. As Matilda is wont to proclaim throughout the episode, she's a young woman exploring her sexuality. Part of that, for any person, includes thinking about consent.

For Kayla Cromer, who plays Matilda and is also autistic, the ambiguity of the situation actually has less to do with Matilda's autism and more to do with the circumstances surrounding this specific sexual encounter. "There is a misconception [that people with] neurological differences [aren't able] to consent to sexual activity," she says. "Some [people with] more severe differences may not be able to tell what is happening. In Matilda's case, she [could]." Matilda asked Zane to kiss her, provided the condom, and said she couldn't wait to have sex again after they'd finished, "but she didn't make the right choice because of her drinking," Cromer adds.

At the end of the episode, both Zane and Genevieve are left feeling uneasy and confused. We've yet to hear from Matilda, but Everything's Gonna Be Okay doesn't try to provide a clear answer about who was or wasn't in the wrong, if anyone at all. Thomas says they wanted to lean into that gray area — not to be preachy, but simply to capture a real conversation parents of autistic children are struggling to have. And to maybe expand someone's perspective in the process.

More like this
Jennifer Coolidge Got A Lot Of “Action” Thanks To 'American Pie'
By Catharina Cheung
How Do I Deal With Both ED & Premature Ejaculation?
By Sophia Benoit
7 Women Share Their Best Orgasm Stories
By Lexi Inks
Nicola Walker Is Confident About Emma & Ian’s Future
By Frances Stewart
Get Even More From Bustle — Sign Up For The Newsletter