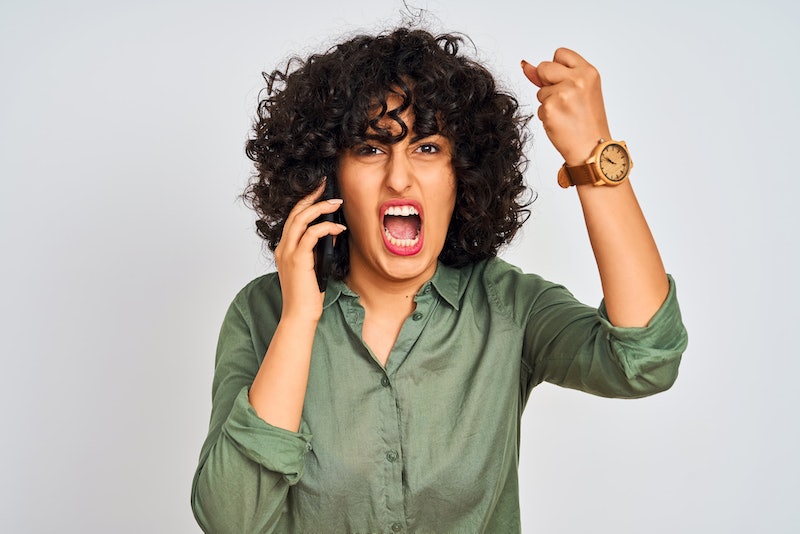 If spam calls are ruining your relationship with your phone, you're not alone. According to a call protection agency, First Orion, spam calls have been increasing exponentially each year, accounting for over 50% of phone calls by 2019. Though it might be obvious what happens to your call log, we wanted to look at what happens to your brain when you get tons of spam calls. According to a mental health expert, if you're already feeling emotionally taxed, receiving spam calls can be psychologically triggering.

On the off chance you haven't received a robocall in a while or forgot how it feels to fall out of love with your phone, let me paint you a picture: You feel the vibration, or hear the sound of your phone ringing. Your pulse quickens, there's opportunity in the air. You're excited to see who is calling and what they have to say. Once upon a time, there was a very low risk that a ringing phone would connect you with anything other than a human who meant to call you. But now, you check the screen and see an unfamiliar number. You answer anyway. The robotic voice performs a pre-taped recording and your stomach sinks. Anger sets it. You hang up and toss your phone in disgust. An hour later you go through the same charade again. Eventually over time, you just start ignoring calls from unfamiliar numbers, bitter.

Your recent call list which once featured proof of human connection now features a fiery red list of missed connections from faux creditors, insurance salesmen, and fraudulent job opportunities from a man named Bill who tries to psych you out by saying he's sorry he missed your call, and then swears he made millions at home and that you can, too. Spam calls are changing our relationships with our phones, as well as how we respond to phone calls, both physically and psychologically.

According to Melanie Shapiro, LICSW, a certified psychotherapist, receiving a spam call doesn't just annoy you — it could set off a series of chemical reactions in the brain that can be quite dangerous. "If someone is already struggling with feelings of emptiness, loneliness, anxiety and depression, [spam calls] can cause greater distress," Shapiro tells Bustle, going on to explain that the calls can trigger the central nervous system and send out panic signals.

An essay published by Harvard University, called "Dopamine, Smartphones & You: A battle for your time" by Trevor Haynes, likens the brain's reaction to stimuli from our smartphones to the brain's reaction to playing slot machines at a casino. Every time we reach for our ringing phones, we know there's a chance that it's a positive notification, like a call from a friend, which would increase the positive reward hormone, dopamine. But we also know it could be negative notification, like a spam call, which wouldn't give us the same reward. "As negative outcomes accumulate, the loss of dopamine activity encourages us to disengage," Haynes explains. Shapiro echoes this sentiment by going on to explain that because we know there is a chance that we won't like what we see on the caller ID, we start looking for signs of distress and become hyper vigilant, aka always on edge, waiting to be activated and then disappointed by our phones.

If you relate to Shapiro's explanation, signing up for the Do Not Call Registry is a great first step to regaining control over your phone and who has access to your phone number. This list is protected by the Federal Trade Commission (FTC) which promises to take aggressive legal action against telemarketers that do not abide by it. Signing up is as simple as heading to its website, adding your phone number, and confirming your registration by email.

Not all spam calls will be blocked by registering, so you'll still have to take efforts to block other unknown numbers. You can also put your phone on Do Not Disturb mode so that all calls are sent straight to voicemail. Or, you can head to your iPhone settings and under "Phone" and "Settings" you can activate "Silence Unknown Callers." You'll still be able to check your phone regularly, but you won't have to worry about hearing your phone ring and having your entire nervous system triggered for Bill with his millions of dollars.