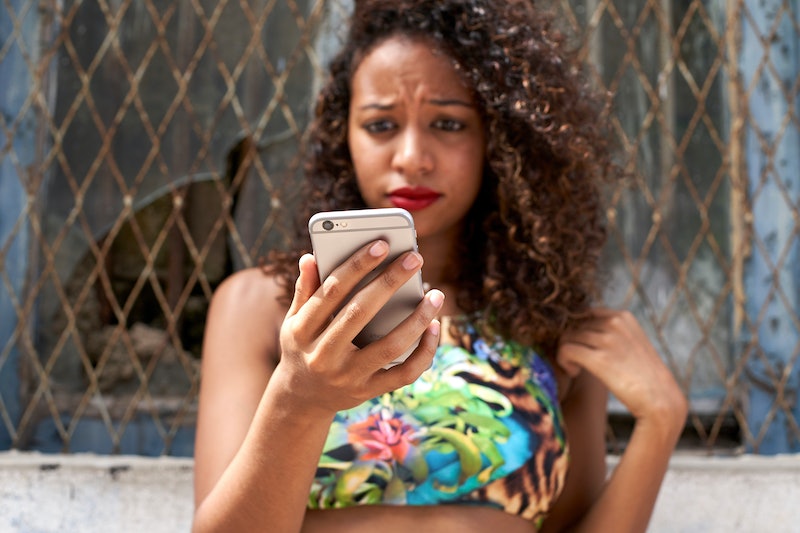 So you answer your phone (usually a mistake) and a robotic voice tells you that someone has a judgement out against you (whatever that means), the IRS is coming to arrest you, or you've won a cruise to somewhere fabulous — all you have to do is provide your social security number. If you're getting calls like this on the reg, and you're an iOS user, then you're going to want know how to block robocalls on your iPhone.

If you've downloaded iOS 13, there's a setting you can enable to send these annoying calls straight to voicemail. Go to Settings then select Phone. You should see a button that says "Silence Unknown Callers." Click the button and any phone numbers not in your contacts will go directly to voicemail. While this is a great feature, I'd prefer not to get robocalls at all. And, let's be real here, sometimes you don't even want to answer the phone for people you know, let alone for persistent robots.

Seriously, I hate answering the phone so much I had mine on Do Not Disturb for years. Sure, you can block the numbers as they come in, but robocallers are pretty crafty, and they do something called "neighbor spoofing." And once you block a spoofed number, the scammers just make a new one.

"Scammers often use neighbor spoofing so it appears that an incoming call is coming from a local number, or spoof a number from a company or a government agency that you may already know and trust," the Federal Communications Commission's website says. "If you answer, they use scam scripts to try to steal your money or valuable personal information, which can be used in fraudulent activity."

Sometimes these relentless scammers even contact your family members. My mom received a robocall that said I owed money on a pay check loan and I was going to be arrested. I had to assure her that I'd never taken out such a loan in my life and teach her how to Google the phone number, which will usually identify it as a scam. If you want to get less robocalls, start by blocking them on your iPhone (and show your mom how to do it, too).

There are a few apps that can also help stop robocalls. One app I use to put a stop to that nightmare is called Hiya. It can be used on iPhone or Android, and it identifies and blocks robocalls, telemarketers, debt collectors, and neighbor spoofed spam calls. It also has a caller ID feature that provides information for who an unknown number might be, and a reverse phone lookup feature to identify whether or not an incoming call is spam.

Once you download Hiya, if you're an iOS user, go to Settings, select Phone, tap Call Block & Identification, and check Hiya 1 and 2 (according to Hiya's website, there are two extensions because there is a limit to the amount of calls each one can block). Easy peasy. On its website, Hiya also has an app called Mr Number, which is available for both Android and iPhone. While I have never used it, Mr Number claims to be one of the most powerful call blockers available.These apps are free and, for me, Hiya has stopped most robocallers from getting through. There are also some paid apps like Nomorobo, which won a Federal Trade Commission robocall challenge.

If you do happen to pick up a robocall, the FCC recommends that you hang up immediately. Do not push any buttons and do not say anything. For example, some robocallers will ask a question and instruct you to respond by saying yes or no. According to CNS News affiliate WSPA 7 News, this is sometimes a scam that involves the caller recording your voice and using it to sign you up and bill you for a service.

The recording of you saying "yes" is what the scammer uses as proof of your consent. The best way to avoid finding yourself in this scenario is to stop the calls from coming through altogether. I recommend doubling up on your security by enabling the new iOS 13 feature and using a call-blocking app. Being committed to never answering the phone also helps. #TheMoreYouKnow.