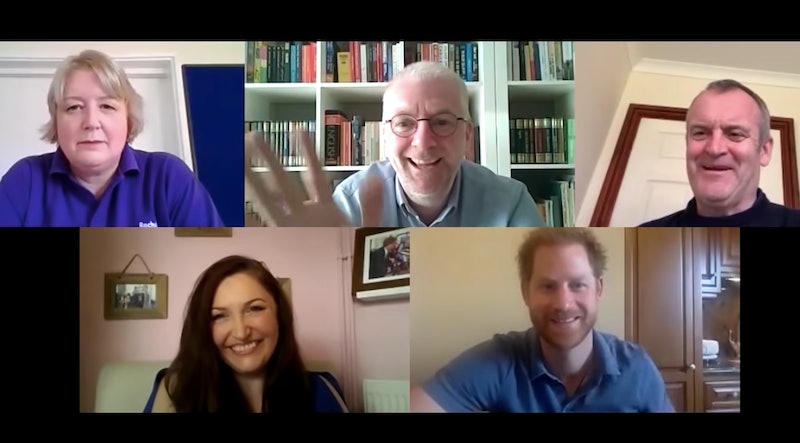 They may have relocated to LA, but the Duke and Duchess of Sussex are still doing their bit where they can. Straight on from revealing that they were donating £90,000, proceeds from their wedding, to Feeding Britain, the couple have gone on to help with two further appearances. One rather private, the other less so.

Meghan and Harry were spotted delivering food parcels to those in need in West Hollywood. Richard Ayoub, CEO of Project Angel Food, told WEHOville that he was delighted by the Sussexes offer to help. “They wanted to help us relieve some of the drivers from their workload. It's really, really amazing," he said. "We loved having them and they are the most down-to-earth people."

Separately, Harry jumped on a video call with families in the UK alongside members of the WellChild team to find out how they've been coping with the coronavirus crisis. Over Easter weekend, Harry, who has been a patron of the charity since 2007, spoke with Craig Hatchin and Leanne Cooper about how they’ve been dealing with the lockdown and the effect that it’s had on their children. “It’s scary,” Hatchin said on the call, who’s 21-year-old son Fraser has multiple conditions including Cerebral Palsy and a chronic lung disorder. “We are frightened because we know that if the virus gets in our house and if Fraser contracts the virus, the implications are quite severe.”

Cooper added: “There is a lot of information out there, but not a lot for vulnerable families and certainly not for children with complex medical needs. If we’re in a position where carers can’t come to work because they might be symptomatic, there is no way we would survive when Sophie needs care seven nights a week, seven days a week, 24 hours a day. It is terrifying.” Cooper’s 13-year-old daughter Sophie also has Cerebral Palsy as well as Scoliosis “and multiple complex medical needs,” as Hello! writes.

Joined by WellChild CEO Colin Dyer and nurse Rachel Gregory, Harry commended Hatchin and Cooper for how they’re coping and also spoke with Sophie and Fraser. “The resilience and the strength that you guys have is obviously incredible and you must never, ever forget that,” Harry said from his and Meghan’s new LA home.

“Full respect to every single one of you,” the royal said. “This is hard on everyone, but it is especially hard on you. I know that WellChild are doing everything they can to support you. Hopefully, through this video we can make it more clear and obvious to government and everybody else that you are in the ‘vulnerable’ bracket and WellChild needs more help.” Here, Harry was referring to the fact that many of the families that WellChild supports haven’t been included on the ‘vulnerable’ list that the government has complied.

Now referred to as the Shielded Patient List, the ‘vulnerable’ list allows the NHS to “identify and contact a group of patients who need specific advice about their circumstances,” as the NHS writes. If patients on this list need extra help and support, they are advised to register themselves on the government’s registry of “extremely vulnerable” people, which includes support in “getting essential supplies or your basic care needs.”

“We are so lucky to have the Duke as [a] WellChild patron,” charity CEO Dyer said. “He has always been so supportive of our work and keen to understand the challenges that families with seriously ill children are facing. Having his help in shining a light on the reality of life behind closed doors for this too often forgotten group of families is invaluable, especially at such a difficult and uncertain time.”