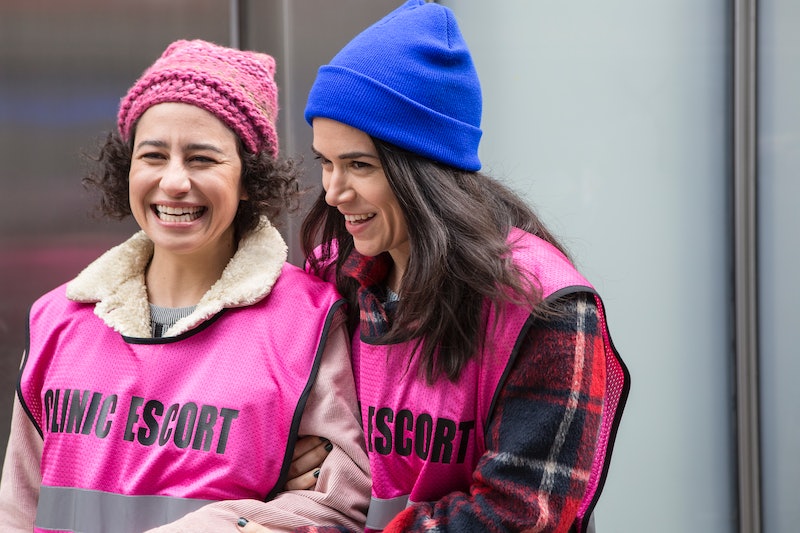 Somewhere in Bushwick, vulva onesies and pussy placards are being made by a group of mobilizing women. Feminist platitudes roll off their tongues, though each have their own interpretations: Is "male allies" an oxymoron? Do nonviolent protests like the Women’s March need more aggression? And are some women just here to drink wine and take photos for Instagram?

Depicted perfectly by the HBO series High Maintenance, this view of feminism is a new, generational form of resistance, in all its imperfect, capricious almost-glory. Though we aspire to be as impassioned and prolific as activists like Carmen Perez or Black Lives Matter co-founder Patrisse Cullors, shows like High Maintenance, Broad City, and Insecure are showing that oftentimes, despite how well-meaning even the wokest of feminists can be, they're not immune to making some dubious calls. It’s not an excuse, but a depiction of a complicated reality, one in which we're all struggling to stay vigilant and root out injustices while also maintaining our mental health.

Thankfully, these shows provide some comfort to feminists who may feel less than perfect, while also gently poking fun at their shortcomings. And sometimes, there's no shame in slipping into the warm affirmations of smart, comedic TV shows that validate our mercurial, anxiety-stricken selves.

A Dubious Decision On High Maintenance

High Maintenance’s aforementioned episode gives a forgiving and hilarious portrayal of feminists who are finding their footing in resistance. At the center of a feminism meetup, Brenna (Brenna Palughi) is the host as well as our archetype. She’s giving and proactively organizing; she’s aware of her white privilege, and she tries to build a safe, inclusive and representative space for women to gather and empower each other. Her excitement is palpable when she announces that a “Pakistani Muslim feminist” will be the moderator — and you’re supposed to make a face at the way she seems to be exoticizing her guest.

This wokeness, or hyper self-awareness, causes her anxiety when only one person of color shows up at the meetup. So she makes a last minute, dubious decision to invite specifically women of color to join — a yoga instructor who she hasn’t seen in a while; a woman she has never met but knows through Instagram. Whether she targeted people based on their race — and coalesced them by their non-whiteness — for the goal of a safe space, or to make up the numbers so her meetup appear as "diversified," you cringe at the amateurish campaign. But what would you do?

Though I am a person of color, I felt a jolting eeriness, like my insides were flash-fried in hot oil, of seeing myself as Brenna on the screen. I think back to the times I have made questionable decisions to appear to others and to myself as more politically moral. The web of contradictions we hold in our heads, because we’re trying to make sense of a volatile environment, is depicted in seat-squirming clarity. By making us raise our eyebrows at Brenna’s move, the episode forces an introspection on the precarious path towards progress.

Wokeness (And Lack Thereof) On Insecure

This delicate balance might be something that Issa on the HBO series Insecure is familiar with. In Season 2, political messaging is worn by the impeccably styled characters, shouting out Harriet Tubman, Trayvon Martin, and Fred Hampton, among others. It amplifies the show’s celebration of the experience of black women, and we’re purposefully made to feel uncomfortable when Issa, played by the show’s creator Issa Rae, stands by a racist principal at the school she’s working at.

The black principal first makes a "build a wall" joke, insinuating such measures could be necessary given the influx of Hispanic children to the school. He then helps Issa and her coworker Frieda (Lisa Joyce) populate their after-school program, but only with Black students, when they have a majority-Hispanic student body. Issa wants to help the kids they can reach, and decides to look past it, while Frieda, who is white, cannot let it slide.

Black women often experience backlash for speaking up at work, and that’s just one of the entrenched racist and sexist workplace biases they face. By allowing Issa to make this decision in the name of self-preservation, it illuminates Frieda's privilege to make unconvoluted decisions free of the responsibility of reparations. The thoughtfully depicted nuance is characteristic of a show that doesn’t go out of its way to explain black culture.

Still, supporting one ethnic minority by casting aside another is racism, and the friendship between two mutually empowering colleagues suffers. In our blossoming discussions around race, our own morals are often prioritized over the life experiences of others. Bubbling underneath is the potential to cause even more division between the people who are supposed to be on our side. “The left is cannibalistic,” writer Chimamanda Ngozi Adichie points out. “They don’t know how to be a tribe, in the way the right does.” Eventually, after some awkward watercooler run-ins, Issa and Frieda work it out, and find ways to be more inclusive of every student.

Fumbling Through Resistance On Broad City

Shouting loudly for the anxiety-stricken feminist is Broad City’s fourth season. The show has always built itself on the feminist act of strong female friendships, but a more emphatic political undertone drives the season. Creators Abbi Jacobson and Ilana Glazer spoke to Bustle about checking their “governmental privilege,” and on the show, we see their characters fumble through their place in the resistance, adapting to the paralyzing, disorienting reality of the Trump presidency while riding on themes of mental health awareness and female and LGBTQ+ empowerment.

After Ilana experiences withdrawals from her Seasonal Affective Disorder lamp, she comes to terms with upping her dosage of antidepressants, acknowledging that fighting it would just be “shame and stigma.” But if being honest with ourselves is the real feat of mental health, Abbi lying to her boss (Wanda Sykes) about needing an “emergency therapy session” so that she could intercept a misdirected parcel leaves a sour aftertaste. It stings particularly after her boss thanks her for her honesty in needing to spend time on her mental health. One minute the women of Broad City are heroes, the next they’re agents of moral turpitude.

Yet showing this sensitive relationship of working with female bosses can be seen as a feminist act, too. Women and LGBTQ+ rights are championed throughout the season, from the pair taking on the role of abortion clinic escorts, to the open discussions of Ilana's gay roommate’s genital health. We also catch slivers of intersectional feminism, as Ilana gets called out for wearing “Latina” hoops, and audibly recognizes her own white privilege at a nail salon. Because of this self awareness, we forgive Ilana when she wreaks havoc at a house party, intoxicated on total self-obsession in order to release the pent-up stresses of her demanding job. We’re trying to be better, but we’re doing what we can, for now.

In all three shows, the anxious, self-contradicting characters with vacillating moralities find refuge in honest, unbreakable relationships. Ilana and Abbi form stronger bonds after each messes up, Issa finds moral balance through listening to the people around her, and Brenna’s dubious decision leads to the potential of new friendships. Resisting is hard to get right, and sometimes all we can do — what we know we can always be good at — is taking care of each other. As long as we are trying to be better, it is okay, sometimes, to be a flawed feminist.

More like this
Brad Pitt Is A Huge Fan Of This British TV Show
By El Hunt
'Heartstopper's Yasmin Finney Wants To Be The First Trans Bond Girl
By Sam Ramsden
It’s Official: 'The Bachelorette' Is No Longer A Fairy Tale
By Samantha Allen
Watch The Trailer For Netflix’s Edgy New Comedy 'FAKES'
By Brad Witter
Get Even More From Bustle — Sign Up For The Newsletter