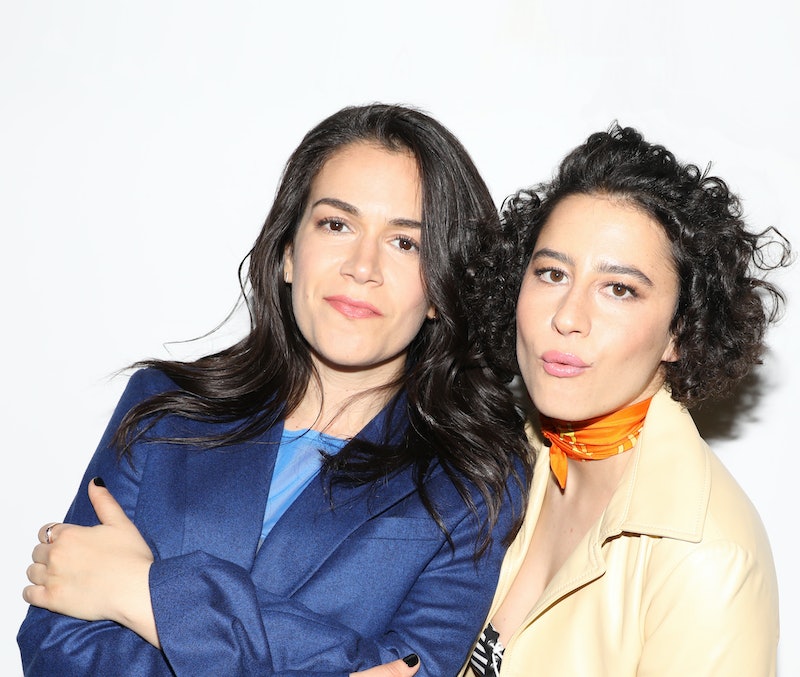 Ilana Glazer and Abbi Jacobson are so freaking relaxed right now. They're barefoot, curled up on a couch at the Hilton Bayfront in San Diego. They're 13 floors above the ballroom where, in a matter of hours, fans at San Diego Comic-Con will be screaming their names and, of course, "YAS KWANE" as the Broad City creators break it down to Jennifer Lopez's "Get Right" — the unofficial theme song of their series' fourth season. At Comic-Con, cosplay and comic book characters are undoubtedly king, but for an hour, these two comedy mavens will reign supreme. And as the San Diego Bay glitters through the window behind Glazer, this brief, quiet moment above the din of the convention below, seems damn near perfect. So naturally, I ruin it by bringing up Donald Trump.

But I had to. The duo famously decided to eliminate Trump from Broad City Season 4 by bleeping his name every time it's uttered on camera and they've talked about the fact that the series was affected when Hillary Clinton lost the presidential election. But there's more to the story, according to Jacobson.

"When we wrote it, we assumed that’s how the election would play out, but it wasn’t written with like Hillary-as-President themes, like I don't think we even were talking much about politics," she says, shaking her head.

Glazer agrees, adding that what did change when she and Jacobson went back into the writers room was the need to check what she calls their "governmental privilege" that they enjoyed during the Obama Administration.

"You could like vague and vibe-wise tell what we stood for before the election in Seasons 3, 2, and 1, but in the post-Trump America you have to make sure that your message is clear and we weren't [in earlier seasons]," she says and as she speaks, she leans forward so hard I worry she might topple out of her seat. "[Before] we were confident and didn’t get into [our politics], but now you have to lay it out, like what you are, what your feminism means to you, that it’s intersectional feminism, not just white feminism."

And Season 4's sixth episode, which screened at the duo's Comic-Con panel a few hours later, more than delivers on that promise. The episode attacks agism, body image, sex positivity, womanhood, and, of course, the T-word with such vigor that, sans spoilers, it can only be explained as an explosion of everything that makes Broad City Broad City. In fact, by the time the credits roll on the 20-minute celebration of womanhood, the Comic-Con audience was practically bursting with joy, happiness, and clear inspiration. Yes, we're all bummed. Yes, 2017 politics are a kick to the gut. But at least we have our gals on Broad City to catch us.

But while the series has become leagues more blatant about where Glazer & Jacobson's politics lie, the creators want to assure fans that they're not joining the #sorelevant white noise that seems to plague television in 2017. From series that are literally about the election (AHS: Cult, we get it) to reality shows that use political tumult as a draw (oh hi, Real Housewives of New York starring Carole Radziwill) to Game of Thrones accidentally having the perfect line for every bit of political news that came our way this summer (seriously, how did they do that?) everything on TV is about being "so relevant" and "on point" during our time of extreme political tumult. And while technically Trump is a factor in Broad City Season 2 (only in some episodes, Jacobson cautions), what truly reigns supreme is authenticity.

"[The show is still] like how our lives are, but it's like, oh wait, I forgot about that sh*t, that terrible sh*t that’s going on, so it’s sort of like, we put that on top," offers Jacobson. "The show still feels so much like the show, it’s just like the characters are living right now, so they’re thinking about the things that we’re all thinking about."

She's got a point — even the most politically motivated of us can only wave the flag of resistance so often. The rest of the time, we're simply trying to live life, find happiness in joy in it, and, frankly, be ourselves in a world that feels like it changed overnight on us. But even that authenticity, that exploration of what life is really like for 20-something feminists living in New York, runs the risk of becoming another buzzword.

"I think it’s just that the internet is allowing us to name everything, catch everything and have it on record forever and it’s just that we’re past our peak consciousness, it’s just getting ridiculous," offers Glazer. She's almost visibly exasperated by her own statement.

"Yeah it’s about categorizing everything and labeling everything, like the hashtag phenomenon is making everything searchable, it’s just a lot ... Why can’t it just be?" asks Jacobson.

It's exhausting, attempting to remain authentic when that authenticity is becoming a commodity in and of itself, like a snake eating its tail. Instead, Glazer and Jacobson choose to celebrate that issues that are important as feminism and authenticity are finally being treated as valuable enough to be trends — even if it feels wrong to treat them as "brands."

"I think that in the context of this world now, we’re more us than we’ve ever been before."

"We’re known for our authenticity and known for our feminism and those are like organic to us, but I don’t dislike the branding of it," says Glazer. "I’m like, 'Dope,' if that’s becoming a brand that’s commercially viable I love it. But there’s something grotesque and out-of-control about it."

Despite the dark side of the feminist brand Jacobson and Glazer have built, Season 4 is diving head first into the authenticity that has become a weird, marketable beast. And at the top of the list of authentic, feminist subjects is one word, three little letters: Sex.

"I think our show is super sexual at baseline, but I think that in the context of this world now, we’re more us than we’ve ever been before," she says. "If that means owning our sexuality then we do it more this season than ever before. Our views, our queerness, our jewishness. It’s just like whatever pisses Them off, with a capital T."

It also happens that the duo also just released their own line of Broad City sex toys with every name focused on embracing and celebrating female sexuality and pleasure, including everything from a pegging kit called Pegasus (after the line Ilana says when Abbi reveals that she pegged Jeremy) to the Ass of Angel butt plug (Ilana's frequent refrain about Abs, obviously) to kegel balls called Nature's Pocket (the best place to store a little green, per Ilana). And while, technically, the line wasn't planned as a middle finger to the big Them that Season 4 is aiming at, Glazer flashes an impish smile when she offers that "it’s a great coincidence."

So sure, their feminism has literally become a brand. And sure, this season is #sorelevant ("Hashtag authentic, hello, hashtag organic, hashtag sincere," adds Glazer, jokingly). But if the super on-brand, commercially viable thing they're selling is an unabashed, unafraid, bombastic explosion of womanhood and sexuality and freedom (spoiler: it is), then bring it the hell on.

More like this
Gabby & Rachel Reveal How That 'Bachelorette' Rose Ceremony Twist Happened
By Grace Wehniainen
At 14, D'Arcy Carden Was Sneaking Out To Parties & Crying Over Kurt Cobain
By Ivana Rihter
In Rap Sh!t, Social Media Has Main Character Energy
By Aramide Tinubu
Watch The Trailer For Netflix’s Edgy New Comedy 'FAKES'
By Brad Witter
Get Even More From Bustle — Sign Up For The Newsletter