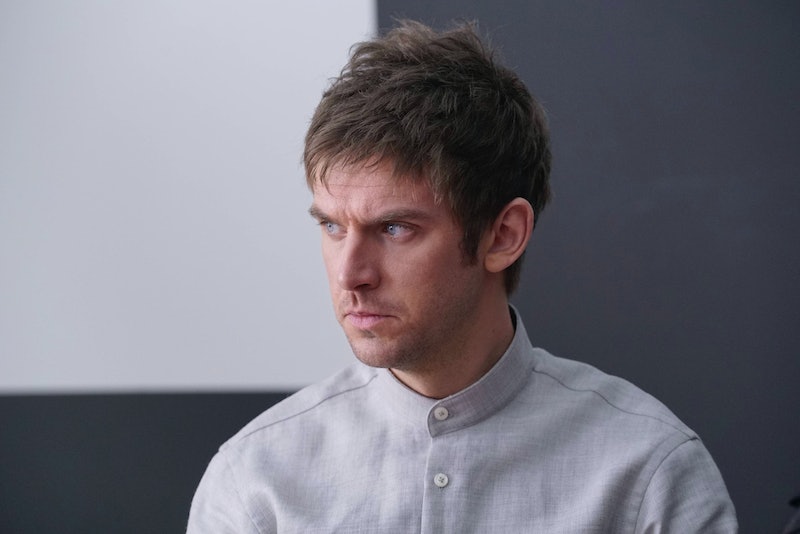 Despite its prestige drama trappings (airing on the same network as such acclaimed programs like The Americans and The People v. O.J. Simpson, coming from the creator of Fargo), it's no secret that FX's Legion is a comic book series. Its protagonist, David Haller, is a mutant who hails from the pages of X-Men lore, originating in the comics in 1985, and the show itself could potentially connect to the X-Men cinematic universe at some point in its run. One of those connections is likely to be the revelation that David has a very famous father: Charles Xavier, the bald and wheelchair-bound leader of the X-Men. But how exactly does that work, considering we never say Charles father a child in the X-Men movies? How is David Professor X's son… and who's his mother?

In the comics, the character was conceived from a tryst between Charles Xavier and a woman named Gabrielle Haller. At the time, Professor X was working at an Israeli psychiatric institution, using his psychic powers to help ease the mental and emotional anguish of Holocaust survivors. Gabrielle was one such survivor, and a patient of Charles' — they had a brief affair, and Gabrielle became pregnant. However, she didn't tell Charles this before he left the facility, and after David was born and Gabrielle became an Israeli ambassador, she never told her son the truth of his heritage.

While living in Paris with his mother, their home was attacked by terrorists; the trauma of the attack triggered David's latent mutant powers, and he incinerated the terrorists' brains. Overwhelmed by his sudden psychic link to so many different minds, David was rendered catatonic, and he was sent to the Mutant Research Center on Muir Island (off the coast of Scotland) to be observed and studied by scientist Dr. Moira MacTaggart. Stymied by the powerful but unstable mutant, Moira summoned Professor X to help… and when the professor entered David's mind, he finally learned the truth about his relation to the young man.

It remains to be seen how Legion creator Noah Hawley plans to adapt this backstory to the screen. Obviously, we never saw Professor X working in an Israeli psychiatric clinic or meeting a woman named Gabrielle or fathering a child in any of the X-Men feature films. According to the timeline, all of that would have had to happen sometime during the First Class trilogy. And while it's possible that Legion will simply reveal that this chain of events took place offscreen during the gaps between First Class, Days Of Future Past, and Apocalypse, it's more likely that Hawley will tweak the facts of where David Haller came from.

So will Legion's version of David Haller be Professor X's son at all? That's a great question, and one that Hawley refuses to answer just yet. "He could be," he teased to Uproxx. "It's a different story, but I'm not ruling that out." It sounds like viewers shouldn't necessarily expect any answers about David's past anytime soon.

But it's interesting to note that the character who figures into David's backstory the most — other than his parents — is someone who has been introduced in the X-Men cinematic universe: Dr. MacTaggart, who was played in both First Class and Apocalypse by Rose Byrne, and who has had a romantic relationship with Charles Xavier both on the screen and on the page. It wouldn't take that big of a tweak to make it so that Moira is Legion's mother in this version of the story, rather than some character that most viewers have never met or even heard of.

As great as it would be to see Byrne return to FX five years after Damages ended its run (on which she co-starred with Glenn Close), this is probably just wishful thinking. I'm sure that Hawley has something twisted and unexpected in store for us, and will dole out information on David's parentage in his own time. I, for one, am happy to go along for the ride until he does.