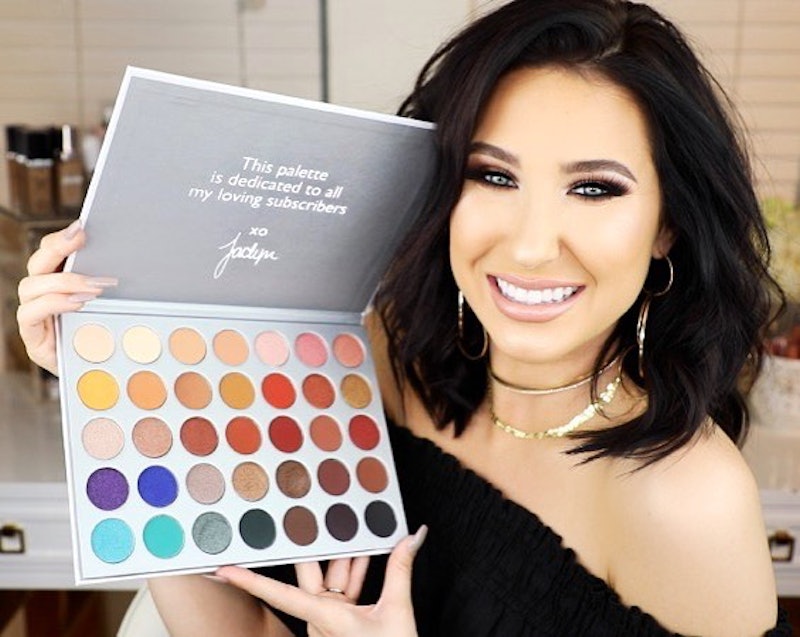 When it comes to beauty gurus, there may not be a name more recognizable than Jaclyn Hill. The makeup artist has become known not just for her fire tutorials but also for the collaborative products she's made with brands — Champagne Pop, anyone? Now, updates to Jaclyn Hill's Morphe palette are coming as it transitions into Ulta stores, and fans should be stoked for the upgrades.

On Sunday, Oct. 15, Hill took to her Twitter officially announce that her palette with Morphe would be coming to select Ulta stores. However, that's not all she announced. The palette has gotten a makeover for the Ulta launch, and the updates are definitely an upgrade. Plus, the changes were inspired by customer and fan suggestions about the original palette.

What's changing? The eyeshadows themselves will remain the exact same. Absolutely nothing about the product itself will be different. There are only two changes to the packaging itself, but they're pretty major. The plain white cardboard packaging is getting an upgrade to a glossy — and cleanable — finish. While this seems minor, many fans have been upset about the how easily the original palette gets dirty. That's now changing.

Secondly, the shade names will be placed on the back of the palette instead of being on a sheet inside. Given that Hill took time to name every shadow, it makes total sense to add the names on the palette itself.

On Monday night, Hill took to her Snapchat to officially unveil her Morphe palette's new look, and it certainly didn't disappoint.

The look of the palette didn't change, but on Hill's Snapchat, it's clear that the packaging is more durable and has a lacquered finish. A baby wipe or other cleansing cloth will wipe away any shadow or foundation stain that be fall onto the white palette.

As for the back, all 35 shades of Hill's palette are displayed in crushed pigment form with their names directly below.

Hill also showcased how, if you're doing a tutorial, the palette can be opened wide to display the shade names as you use them.

Of course, it's sometimes difficult for YouTube gurus to do much of anything without criticism. And that goes for Hill, who has been on the receiving end of some fan criticism since the new palette style was announced. Several fans have said the update comes too soon after the palette's original launch in June.

Hill, however, was prepared for it, saying on Snapchat, "I know that there's going to be drama around this. I'm sure there's going to be videos made about it, and people are going to question my intentions and call me names, I'm sure, and somehow make me look like a bad person, but that just happens a lot. But honestly, you guys, do you ever think I would ever do something to piss you off or do anything just for money or do anything when I know damn well it's going to upset you?"

Hill went on to explain her intentions in the Snapchat, saying, "please keep in mind that I'm just always trying to do my best and create bomb ass products and try to make it as reasonably priced as possible and just be happy and live life. I'm just trying to live. That's all."

The Jaclyn Hill x Morphe upgrades for Ulta are, nonetheless, exciting for those who either haven't gotten the palette yet or want to own two. With fans and other gurus previously calling for the shades to be on the palette itself and a new, cleanable package, Morphe and Hill are clearly listening to fans. And can you really be angry about that?