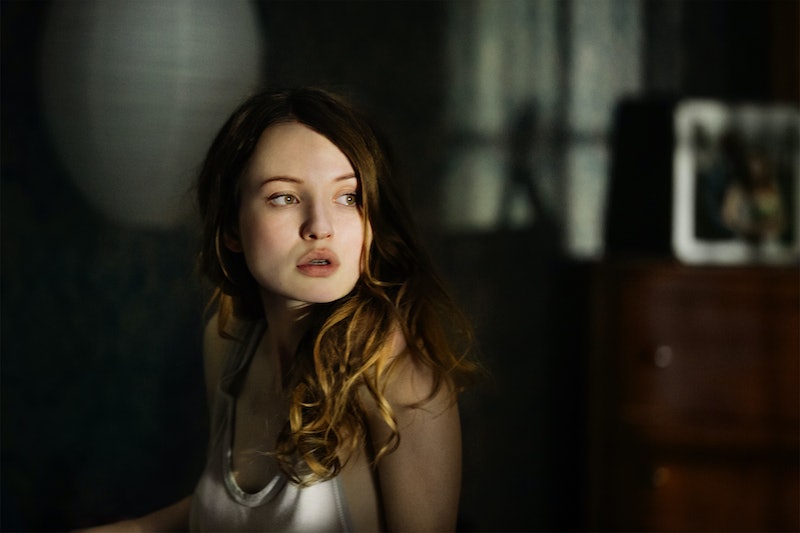 Shadow Moon gets quite shock at the end of the May 14 episode of American Gods when he walks into his hotel room to find his supposedly dead wife (Emily Browning) waiting for him. "Hi, puppy," she says with a sad smile. But how is Laura alive on American Gods? Last viewers saw her (other than in a brief dream in Episode 2), she was being lowered into the ground in her casket after being killed in a tragic car wreck. So how does she come to be sitting, seemingly whole and healthy, on that hotel bed?

The answer to that question is connected to the horrific accident that befell the car Mad Sweeney was riding in, impaling the driver (Hannibal alum Scott Thompson) through the face with a metal pipe. Judging by his reaction, things like that don't happen often around Mad Sweeney. But when a cop mutters something about "bad luck," the leprechaun realizes what's happened: he literally lost his luck. Or, more specifically, he gave it away; to Shadow, after the ex-con beat him in a fight at Jack's Crocodile Bar in the series premiere. In his drunken state, Sweeney gave Shadow his special lucky coin, rather than one of the dispensable gold coins that are constantly flowing out of hands.

You'll remember what happened to that lucky coin: Shadow threw it on his wife's grave, where it promptly sank through the soft soil and out of sight. When Sweeney goes to dig up Laura's grave in order to find his missing luck, he instead finds a neat round hole in the top of her coffin; clearly, the coin continued its descent through the dirt and straight into the coffin, where the magical artifact apparently awoke the dead woman's corpse.

Anyway, that's the "how" of "How is Laura alive?"… but the "alive" part of the question is still a bit up for debate. Jut because a magic coin reanimated her doesn't mean it resurrected her — and just because she's walking and talking doesn't mean she's alive in the traditional sense of the word. And there's also the question of how long she'll remain in her undead state, given how badly Mad Sweeney wants his lucky coin back.

In Neil Gaiman's novel, once Shadow discovers his wife is trapped between life and death, he vows to find a way to fully restore her to the land of the living. But do any of the gods in this story really have the power to bring someone back from the dead? Will Shadow succeed in his mission before Mad Sweeney manages to reclaim his coin? And what will Laura do with the half-life limbo that she's been granted? So many questions already… and audiences are only three episodes into this wild and weird new show.