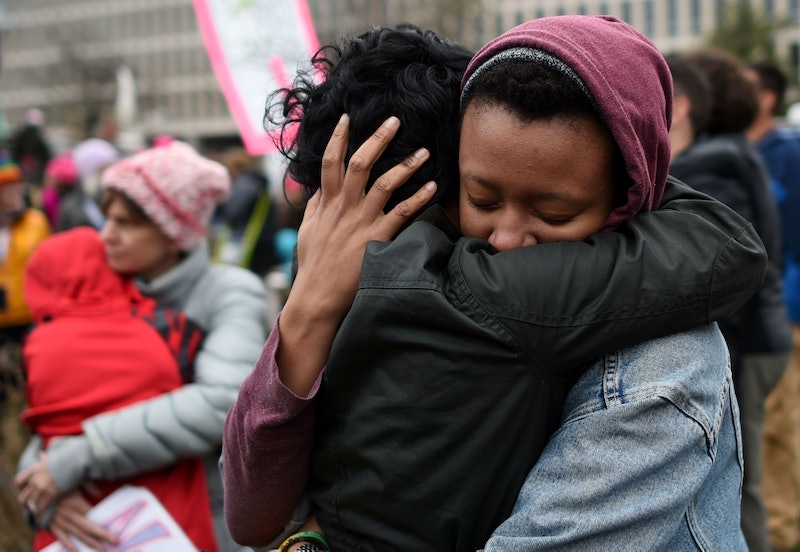 After more than 20 women came forward accusing Harvey Weinstein of sexual harassment and assault, the director Woody Allen — who himself has faced accusations of sexual assault — told BBC News he'd heard rumors of Weinstein's behavior, just not "horror stories with any real seriousness." Which begs the question: What do people consider "serious" offenses? There seems to be a subset of people who are unclear on what sexual assault actually is.

While each state defines sexual assault differently under the law, "the hallmark of sexual assault is some form of sexual contact that is with an intimate body part of the victim or penetration or oral copulation that occurs without the consent and against the wishes or will of the victim," says Michele Landis Dauber, Stanford law professor and chairwoman of a campaign to recall Aaron Persky, the California judge responsible for Brock Turner’s lenient sentence, in an interview with Bustle. "That would include everything from grabbing someone 'by the pussy' to forcible rape. It's a broad category that includes a lot of different conduct, but it isn’t that hard to figure out what it is."

Because some men still have a hard time understanding what sexual assault entails, they've been avoiding women in the workplace, according to the New York Times, for fear of being wrongly accused. "It's a huge reputational risk all of a sudden," a venture capitalist told the Times. “A big chill came across Silicon Valley in the wake of all these stories and people are hyperaware and scared of behaving wrongly, so I think they’re drawing all kinds of parameters.”

This phenomenon sheds light on a larger issue. "If someone is so concerned of being alone with a woman without being accused of committing sexual violence, that is very concerning and that's what we should be focusing on," Jessica Davidson, the managing director of End Rape On Campus, an organization addressing sexual violence on campus, tells Bustle. "Addressing sexual violence by avoiding women is just furthering the problem, and keeping women outside the room just puts them more on the margins and doesn't actually do anything to address sexual violence and gender equity in the workplace."

Davidson argues their fear stems from our culture's "disproportionate obsession with false reporting" when it comes to sexual assault. "The FBI finds that sexual violence is falsely reported at the same rate as any other violent crime," she says. "That's between 2-10 percent of the time, leaning closer to 2 percent across all statistics."

One of the key elements of sexual assault, as Dauber points out, is a lack of consent. "Our culture doesn't do a good job of talking about consent," Davidson says. "A vast majority of the time sexual violence happens because people don't respect consent and because people don't ask for it." According to a Washington Post-Kaiser Family Foundation poll, almost half of college students do not know the definition of consent or the potential ramifications of not receiving it, and 46 percent said it’s “unclear whether sexual activity when both people have not given clear agreement is sexual assault.”

A majority of sexual education programs in the United States do not teach consent. Starting next year, all California high schools that teach health as a graduation requirement must include lessons on sexual assault prevention. And this year, Virginia passed a bill requiring the addition of "age-appropriate" information on consent to the Family Life Education curriculum taught in high schools.

If people are better educated about consent, Davidson believes, they'll understand that "bodily autonomy matters," she says, "and that if you harass women or force yourself on women, that's a problem, and that's a behavioral problem, that's not stemming from a lack of knowledge."

Others believe that the definition of assault is clear. Linda Dale Hoffa, Partner and Chair of the White Collar/Corporate Investigations Practice Group at the Dilworth Paxson law firm in Philadelphia and a former federal and state prosecutor, says, "Sexual assault is inappropriate because it is without consent."

She adds: "Woody Allen delegitimizing it or acting like it’s not a big deal, because 'anything but rape is not a big deal,' is not true because the individual who has been assaulted, their dignity has been assaulted, their dignity as a human being," Hoffa says. "They have been demeaned in many ways. They can be very frightened that they may be at risk of even greater harm or danger."

In 2015, California enacted the "yes means yes" law, which defines consent on college campuses is affirmative consent, or "knowing, voluntary, and mutual decision among all participants to engage in sexual activity."

According to Davidson, if states had consent laws that were "easy to understand and easy to teach, then you'd see people engaging with consent in a completely different way."