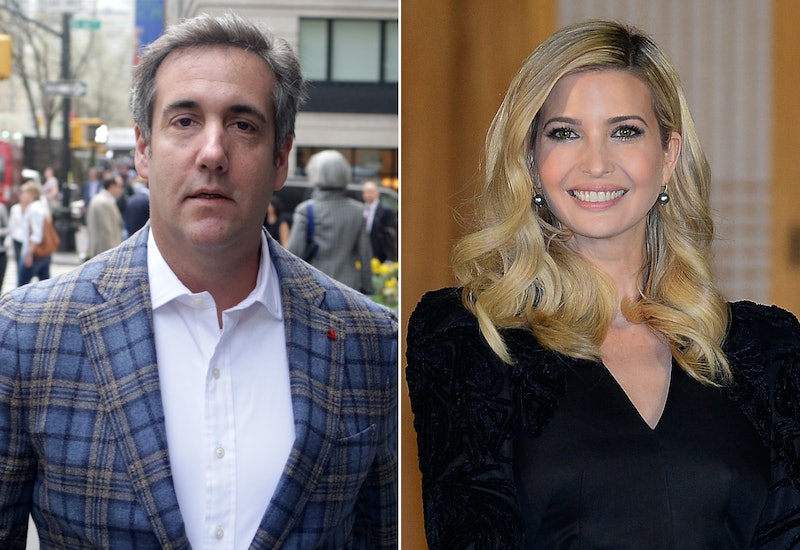 So far, Donald Trump's eldest daughter has stayed out of the numerous parts of the federal investigation swirling around his organization and administration. However, it's looking like Ivanka could get caught up in the Cohen investigation — and it all goes back to her high-level involvement in the Trump Organization.

Reports of the raid on Trump's personal lawyer Michael Cohen apparently infuriated the president, and Trump's legal team has now requested the right to review the seized documents, according to a letter that Trump's lawyer filed with the court on Sunday. It's clear that prosecutors reasonably expected to find information there that Cohen wouldn't give up willingly, otherwise they would not have been granted the search warrant.

It's also clear that the documents likely involved Trump's business dealings, because one of Cohen's main roles was working alongside Trump's children to seek out international deals for the organization, The New Yorker reported. Trump has long fought to keep all of his business information private, by declaring that Mueller would be crossing a "red line" if he investigated Trump's finances and by refusing to release his taxes.

However, it wasn't just Trump himself at the top of the Trump Organization. His children were also there — and Ivanka Trump has been under investigation for felony real estate fraud before, for allegedly misleading potential buyers of a project she was working on. The case was dropped, but if the documents seized in the Cohen raid contain information about the business deals that have brought Ivanka under scrutiny in the past, then this could be the moment when she ends up in trouble that she's so far managed to avoid.

According to a collaborative report from The New Yorker, ProPublica, and WNYC, Ivanka and Donald Trump Jr. were under investigation in 2012 because of the way they were attempting to sell properties. Sources for the report said that they had seen emails between the siblings discussing how they would inflate their sales numbers to prospective buyers in order to make the properties seem more attractive — which prosecutors believed amounted to criminal real estate fraud. The Manhattan district attorney dropped the case, though, after Trump lawyer Marc Kasowitz — who had donated to the district attorney's re-election campaign — stepped in.

CNN also reported in March that the FBI had been investigating another deal that Ivanka was a part of as a part of her effort to obtain security clearance. According to their reporting, Ivanka had played a key role in the Trump Organization's licensing dealings with the Malaysian developer who was building a Trump International Hotel and Tower in Vancouver. Although the family moniker is on the building, they don't own it; rather, the Malaysian organization paid the Trump Organization to license the name. One of the main financial backers of the Malaysian company, though, has a history of shady dealings — and it's up to American companies and their owners to make sure that they only work with foreign partners who are clean. Ivanka's team, however, denied that any issues had been raised in her security clearance process.

Ivanka played a similar role in another questionable Trump Organization deal, according to reporting by The New Yorker. It was another licensing agreement, this time in Azerbaijan's capital, Baku. According to Transparency International, the country is already exceedingly corrupt — and the oligarch the Trumps were working for was, according to The New Yorker, corrupt even for Azerbaijan. Their reporting even suggested that that oligarch had connections to the Iranian Revolutionary Guard. The project was never completed, but there's no denying that Ivanka was a part of it — even her Instagram attests to that fact.

Information about any of those cases could come up in the documents seized in the Cohen raids, and there's no telling what else could be there. It could even reveal information on the Trump-Russia investigation, given the information revealed in the August 2017 New York Times report that Ivanka had visited the Kremlin and taken a seat in Putin's personal chair. At the time, Ivanka told the Times that she had not been involved in any business dealings in Russia and that while she had toured the Kremlin, she did not recall actually sitting Putin's chair. If the FBI now has documentation to contradict that, it's just one of the reasons that Ivanka could find herself in serious trouble.

More like this
These 2 Women Could Be America’s First Lesbian Governors
By Tess Garcia
Here’s Everything You Need To Know About Operation London Bridge
By Bustle UK
Where Is Armie Hammer’s Ex-Wife Elizabeth Chambers Now After 'House Of Hammer'?
By Grace Wehniainen and Radhika Menon
10 Photos Of William, Harry, & Their Cousins Honoring The Queen Together
By Stephanie Topacio Long
Get Even More From Bustle — Sign Up For The Newsletter