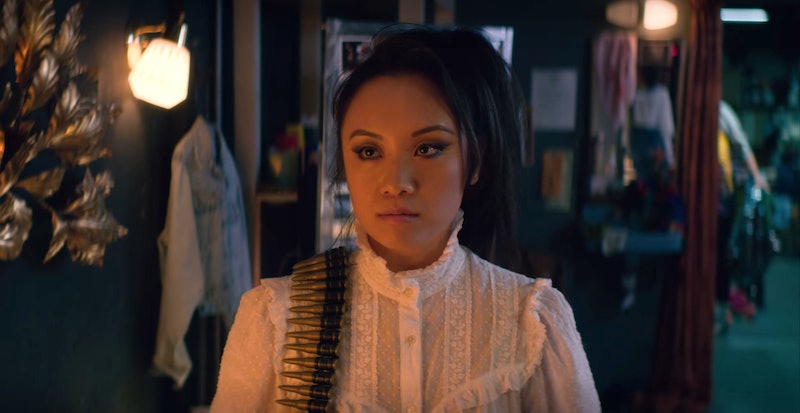 Spoilers ahead for GLOW Season 3. Jenny on GLOW has always been one of the show's quieter characters, but in Season 3, she's forced to open up. Embodying an exaggerated Asian stereotype has taken a toll on her, and watching Melrose appropriate her onstage persona proves to be Jenny's breaking point. So, huddled around a campfire with her teammates, she tearfully shares the harrowing story of how her family came to America. It's a difficult moment, but one that is ultimately cathartic — both for Jenny and for GLOW star Ellen Wong.

"In a way, I feel like Jenny going through this realization of understanding the importance of who she is and what her past is and what her family has gone through and how that is an important part of herself, I've had to learn that about me too," Wong tells Bustle. "It's been an interesting journey doing that hand-in-hand with her and finding the confidence in myself to also speak up about that."

Since joining the Gorgeous Ladies of Wrestling, Jenny has played Fortune Cookie, who Wong describes as a "mash-up of different Asian cultures." She wears a Japanese kimono and Vietnamese conical hat, carries a samurai sword, and jumps out of a Chinese fortune cookie — an appropriation in itself, considering the food originated in America. The character may be entertaining in the ring — at least, to those in the audience — but for Jenny, it's been taxing. And GLOW's move to the Las Vegas' Fan-Tan Hotel and Casino only exacerbates that.

There, surrounded by "white waitresses walking around in Chinese attire" in a casino with "a stereotypical Asian theme," Wong says the "little things" start to add up. "It's not even just being Fortune Cookie. It's also about everybody around her constantly living in this space that is one big huge stereotype and her feeling like she's suffocating."

So when the GLOW women decide at the last minute to switch characters and Melrose (Jackie Tohn) ends up doing an offensive interpretation of Fortune Cookie, Jenny reaches her limit. "I understand the world of wrestling is about stereotypes ... but it's a whole other layer when then you put somebody else from a totally different race out there playing your character," Wong says of the scene. "I think that what Jenny really would have wanted is for Melrose to go to her and say, 'Can we talk about this? Can we talk about what I'm going to be doing? Because I'm supposed to play Fortune Cookie and I want to know how you feel about that. What does that mean to you? And what are you comfortable with?'"

Afterward, Jenny is justifiably upset, but Melrose can't grasp what she did wrong. Eventually, an exasperated Jenny reveals to the other women in Episode 6 that her family escaped the Cambodian genocide by fleeing to the U.S. "Everyone else we knew died. Every relative. Every friend. Everyone," Jenny explains. "I get to be one of the lucky ones, like really, really, really lucky. And now I'm jumping out of a fortune cookie every night pretending like everything is fine."

Hearing Jenny's horrific past helps Melrose realize why what she did was so damaging, but perhaps more importantly, sharing it helps Jenny find power in using her voice and standing up for herself; in the next episode, she asks Debbie for a raise. "It feels like a burden when you're always holding onto your own story that way," Wong says. "[And] when you share it, it frees you."

Enacting Jenny's story was also freeing for Wong, whose parents escaped the Cambodian genocide in real life. Though she was born in Canada, Wong says it's been "cathartic" to embody a character who shares her Cambodian-Chinese identity and family experiences.

"Playing this character, I felt this sense of duty came up in needing to bring up certain things, like especially in what happens in Episode 6. I've talked to [GLOW showrunners Liz Flahive and Carly Mensch] a lot about who Jenny is and what her past is and what my past is and what it was like growing up with my parents," Wong says. "I've really learned to use my voice in a different way just by being in this show."