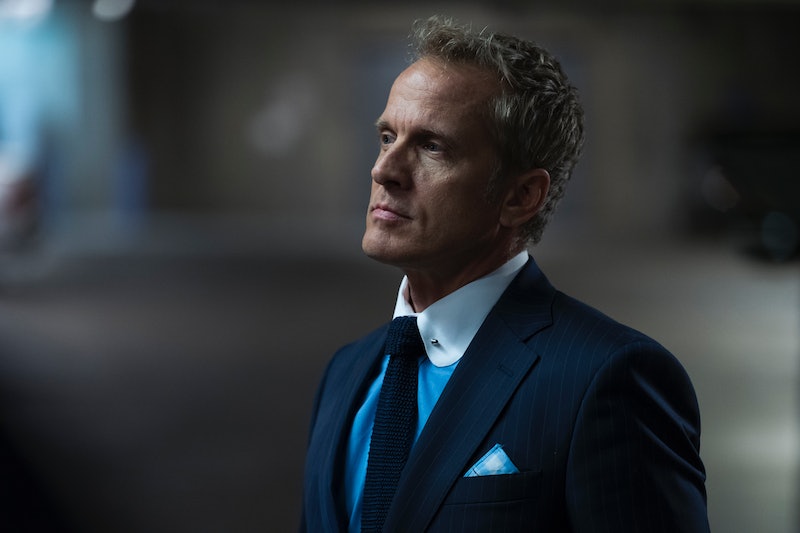 Howard Hamlin is not the type of man to lose his cool easily. Yet, the eighth and ninth episodes of Season 3 of Better Call Saul have shown a new side to this smooth attorney. As the McGill brothers antagonize him, Howard has been forced to act out in a very unHoward-like way. In anticipation of the Better Call Saul Season 3 finale on June 19, Howard actor Patrick Fabian spoke with Bustle in a phone interview about how Jimmy, Chuck, and Kim have each had a hand in unhinging his character a bit.

"Between the fighting McGill brothers now, it's just a black hole that is completely taking Howard off his game," Fabian says of his character's mental state at the end of Season 3. But as for which McGill brother is getting under Howard's skin the most, he says, "Jimmy's the worst, right?" He references the scene from the June 12 episode, "Fall," where Jimmy approaches Howard about settling Sandpiper Crossing. "It's B-grade theater, it's carny talk, it's so gauche," Fabian says of Howard pulling out money from his own wallet and offering it to Jimmy. "It's so beneath him — and yet he does it. He does this playacting beneath a garage, pulling out cash, and shoving it in his face — that's what Jimmy has driven him to." While there's still a certain level of respect that exists between Chuck and Howard, "Jimmy makes him raise his voice. Makes him call him names," Fabian says.

Yet, even though Chuck and Howard are more similar people than Jimmy and Howard, Season 3 has led to Howard no longer wanting Chuck to be an active partner of HHM. On exactly why it took so long for Howard to ask Chuck to retire, Fabian doesn't give any insight on the backstory that exists between his character and Michael McKean's. "McKean and I have had discussions and I talked to [show creators] Vince [Gilligan] and Peter [Gould] a bit about it as well," Fabian says. "I mean the great thing about these writers is that they're not definitive about a whole bunch until they are — until they are definitive about it and then they are the most detail-oriented artists there are. But at this point, the reasons for Chuck and Howard's symbiotic relationship haven't really come to the forefront and been necessary, I don't think. The fact that we knew something's there on account of my behavior, I think is sort of the intriguing thing."

"Depending on how the scene is going or how I think things are going, we're either equals or not equals," Fabian says of Howard and Chuck. And in "Fall," it sure seems that Howard is no longer viewing Chuck as an equal. Fabian notes how Chuck's ego is a major reason for Howard not being able to trust Chuck's judgment anymore — as was shown when Howard told Chuck he didn't need to testify at Jimmy's bar association hearing earlier in Season 3. "But Chuck's ego supersedes the moment. And supersedes Howard's better judgment, as it turns out the way events play out. And I think in that moment, there's a power shift when Howard sees Chuck exposed on the stand. I think any of the coddling he's done towards Chuck's quote-unquote condition goes right out the window," Fabian says. "At that point, all of that stuff gets — pardon the pun — chucked out of his thinking and now he has to start thinking about how he deals with his friend moving forward and I think that leads us to the things we've seen in the last two episodes."

But while the McGill brothers are a major reason for the unraveling of Howard, they are not solely responsible since Kim in Episode 8, "Slip," ruffled his feathers too. Beyond Howard being upset with Kim representing Jimmy in his New Mexico bar association case, he's still upset with her leaving HHM. "It was supposed to be HHM and W. That's where we're going. That's where we were heading," Fabian says. "Howard was going to check the box of 'female empowerment.' It's a win-win. He genuinely loves her — and I say 'love' like in a paternalistic way. He picked her over Jimmy to send her to law school. He's grooming her. She is going to take over the firm and the feather in his cap is it's not going to be a good old boys network," Fabian says. "And she spurns that and she ruins that." So when Kim tries to pay Howard back for law school in "Slip," it does not go over well with Howard. "Kim gives that check to him and Howard throws a fit at a valet — in public," Fabian says, amusingly channeling the outrage of his character. "It's hideous. It's so embarrassing."

Regarding theories about Howard and Kim — which range from Kim and Howard becoming law partners to Kim and Howard getting married — Fabian says, "I haven't heard a whole bunch. I've definitely gotten the probes on social media of like, 'Oh, only somebody who is desperately in love with somebody would treat somebody so badly. I would know. #HowardAndKim.' Who knows. The writers may invoke something like that. I love working with [Kim actor] Rhea Seehorn so much, we have such a great time."

"Because Rhea is such a good actress — she's given such levels and humanity to it — that it's that weird thing of everybody who loved Breaking Bad was so excited about their favorite character from Breaking Bad, Saul," Fabian says. "And in fact, they've shown this Jimmy McGill origin story and I think people are very much somehow weirdly rooting for the future not to happen the way we know it's going to because now there's a sense of like, 'Can Kim save him? Can't the lovers get together? Can he catch a break? Wouldn't it be great if he just got some money and got a condo outside of Albuquerque?' And you know where it heads and so there's that gruesome, car crash mentality of wanting to watch slowly roads not taken, choices not made, and you sit there and just get that awful feeling in the pit of your stomach."

As for what fans can expect from the Season 3 finale, Fabian doesn't say much, but does confirm that "some definitive things happen." He notes how the penultimate Season 3 episode, written by Gordon Smith, has every character at a breaking point. "Everybody's falling apart. Everybody's sort of falling off base. They're falling from their moral center. They're falling outside of themselves. Kim's overworking herself and wrecking her car. Jimmy is finally falling off of doing the right thing to doing the wrong thing. Howard's yelling," Fabian says. "Everyone's breaking and falling apart. But in the season finale, there are definitely some resolutions."

The last two episodes leading up to the finale have shown a shift for Howard. "He's gotten a little chatty the last couple of episodes, but really, for the most part, he's been an observer, and unfortunately, he's been subjected to reacting to events that are occurring to him," Fabian says. "And what we've seen in the last two episodes is Howard maybe trying to affect something deliberately in a new way and I think that's a new color we get to see for him." And you can see if what he's trying to affect will work out for him during the Season 3 finale. Because while it's never safe to assume that things will work out for a character on Better Call Saul, if anyone has luck on his side — it's certainly Howard Hamlin.