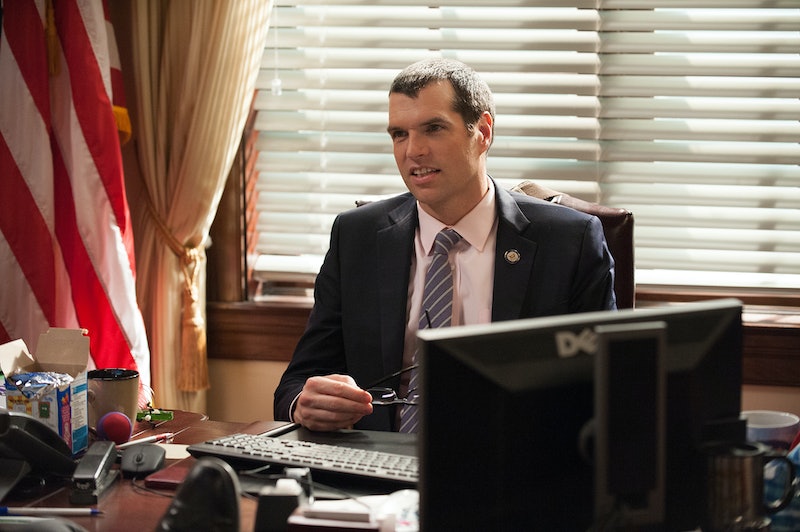 When Season 5 of Veep concluded in June 2016, it was hilariously ironic that Jonah Ryan was the only character who still had a stable job in politics. Fast forward to Season 6, which premiered three months after Donald Trump's inauguration, and it suddenly doesn't seem quite so far-fetched (spoilers!) — especially after Jonah announced his bid for the presidency during the Season 6 finale. The series takes place in an alternate political universe where Donald Trump & Co. don't exist — but Timothy Simons, who plays Jonah on Veep, tells Bustle that although Trump is "beyond parody, what brought him into power can still be satirized."

And that's what's at the core of Veep — despite the fact that it's a comedy, D.C. insiders have described it as TV's most realistic depiction of politics. "Selina’s always had some Trump qualities," Simons says. "She considers herself a champion of the working person and yet, if she ever has to shake a working man’s hand, she immediately asks for sanitizer. Even before Trump, untalented and ungainly idiots have been failing upwards to the House and Senate for years."

Still, some adjustments had to be made to the show as a result of Trump's rise to the presidency. Simons says one joke was eliminated after the Access Hollywood tape was leaked, and another punchline about "golden showers" was also removed after Buzzfeed shared a dossier full of unverified allegations — some of a sexual variety — against the president, from an anonymous individual who claimed to be an intelligence official.

"I don’t know how it happened, but we became aspirational in this whole thing," Simons says. "[Trump] has completely rewritten what it means to have a presidential scandal."

Simons is political both onscreen and off — he's been a vocal critic of the Trump administration and frequently expresses these views on his Twitter account. Although he injects humor into his tweets, Simons is deeply concerned about the current state of affairs. "I do find comfort screaming into the void," he says. "The never-ending stream of awful things coming out of that administration is a lot to handle."

But, the actor will give credit where it's due, namely to the current press secretary. "This is one compliment that I will give Sean Spicer: He is willing to eat platefuls of sh*t every day. And he does it with a big smile, day after day," Simons observes. "I'm not saying he’s good at it, but I wouldn’t eat that much sh*t. It's like the guy that eats 150 hotdogs in that Coney Island contest. I’m not gonna do that, but it’s also a little impressive."

Although Simons says the Trump team "makes the bumbling idiots on our show look like incredibly smart, measured people," he's quick to add to add that "any portrayal of the U.S. government as competent and composed is unrealistic," and that's been the case since Veep premiered in 2012.

It's not a coincidence that Veep is a painfully realistic depiction of Washington, D.C. When the series was picked up, Simons and his castmates spent time talking to Washington insiders to get the inside scoop on what day to day life is really like. "We noticed when we took staffers out to drinks when we first started the show that one or two drinks in, they’d still have this kind of perfect, aspirational view of politics and Washington," Simons recalls. "And then three or four drinks in they would just kinda hunch over their drinks and be like, 'You know what? F*ck this town!'"

When his character was elected to the House of Representatives last season, Simons met with Congresspeople to get a sense of what it's like to be a freshman congressman. And now that Jonah has thrown his hat into the ring for the presidential race, who knows what the future will hold? When asked about what's next for his character, Simons recalls a Season 5 quote from Jonah himself: “I'm a MRSA infection. You don't get rid of Jonah Ryan!"

"I mean, he is like a MRSA virus. You just don’t get rid of him," Simons says. "No matter what it is, he’s going to come back from it. He always does."

Veep Season 5 is currently available on Blu-ray and DVD. And when the series returns for Season 7 next year, viewers will see Selina face off against her former employee for the Oval. And who knows how a few more months of real-world context will color that fictional race.