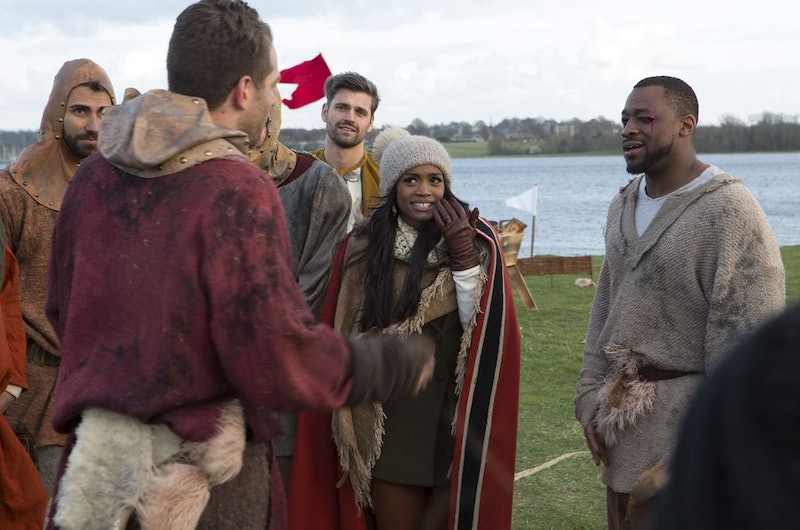 The Bachelor franchise has a bad habit of showing bloody scenes in promos that almost never make it into the actual episodes, and when one finally did, it was totally no big deal. On Tuesday night's Bachelorette episode, Kenny got hit in the eye, but there wasn't exactly an exciting backstory behind it. No, Lee did not haul off and hit him, and despite the fact that he's a professional wrestler, he didn't get into a fight with anyone else, either. The real reason it happened? He was pretending to be a viking, of course.

Being that this leg of The Bachelorette has Rachel and her men in Norway, of course a group date on Tuesday's ep involved vikings, and the guys competed in viking games. In the end, Kenny and Adam were named the two strongest competitors, which meant they were locked in a battle themselves that ended up a little messy... and bloody. Both Kenny and Adam ended up with injuries by the time their own brutal viking game was finished, and poor Kenny seemed to be hurt the worst. Getting cut that close to your eye can't feel good, after all — even in the name of love.

And even though it looked painful, Kenny played it off like a boss — of course, considering his career, this probably isn't the first time he's suffered a laceration like this, and it's almost certainly not the worst one he's had. He may have lost the challenge, but at least he has the battle scars to show he put up a good fight, something Rachel seemed to appreciate. His daughter will be so proud.

It's a bit of a bummer that this injury wasn't quite as dramatic as the promos led fans to believe, but then again, it's good that nobody got seriously hurt. Here's hoping the rest of this season involves a little less blood... but maybe more vikings? Seriously, no one can ever get enough vikings.