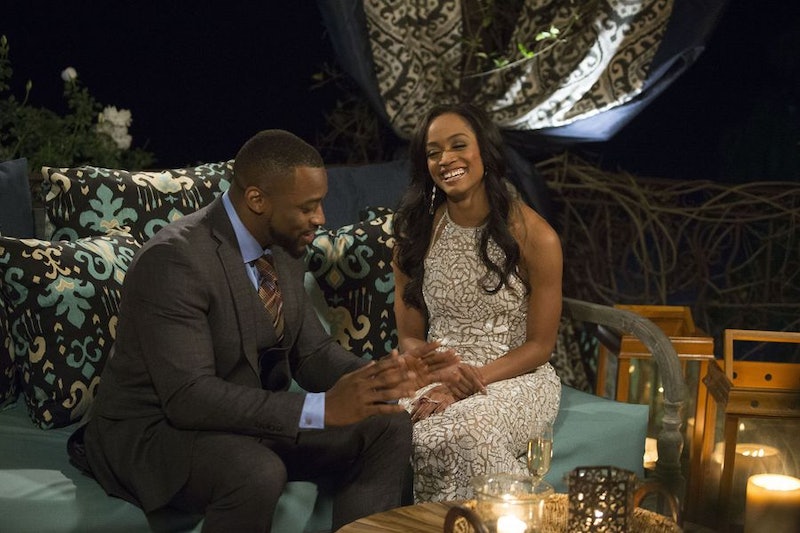 While I’m not going to pretend that reality television is the epitome of morality and dignity, sometimes I find myself surprised at the drama these shows feature. The Bachelor and The Bachelorette are so long-running that super fans like myself can very easily see what’s coming around the bend. There are red herring ambulance calls, faux pregnancy scares, fights that never happened, etc., but I’m not sure that I could have guessed this one — Lee and Kenny have a two-on-one date on The Bachelorette, and it’s awful.

I don’t know if I’ve just hit a limit on my Bachelor and reality television tomfoolery, but the Lee and Kenny battle is too much for me. Right after the season started, alleged tweets from Lee's (now private) Twitter came to light, and they weren’t pretty. The content from the account had a bunch of racially insensitive, sexist, and altogether offensive tweets, which is interesting considering the fact that Lee signed up to appear on the season of The Bachelorette with a black woman (the very first!) as the lead. (When Bustle reached out about these alleged tweets, ABC and Warner Bros. declined to comment. A rep for Lee could not be reached.)

With that in mind, let’s move to the frequent infighting that tends to happen on The Bachelor and The Bachelorette. Lee is picking fights, and Dean alleged that Lee was only targeting certain members of the contestant pool. Dean claimed to producers during a talking head: “The only people I've seen Lee pick fights with are ... not the people he's used to seeing on a daily basis ... from a cultural perspective.” When pressed by a producer to explain, Dean claimed, “You know exactly what I mean when I say that. The longer Lee sticks around the more everyone will be aware of his intolerance.”

Then, on the June 19 episode of The Bachelorette, Lee did the classic tattletale move, telling Rachel that Kenny was “aggressive” toward him. As Bustle's Kayla Hawkins pointed out, that word has a very negative connotation in the black community. For decades, black men like Kenny have to fight the stereotype that they are more "aggressive" than men of other races. Lee is reinforcing these stereotypes, whether he means to or not.

And, the show may not have been aware of Lee's tweets as Chris Harrison claimed, but they were aware that he was clashing with Kenny and Eric and that Dean voiced his opinion on the drama. So, given all that, this two-on-one is not a good look for what was supposed to be a groundbreaking season of the series.