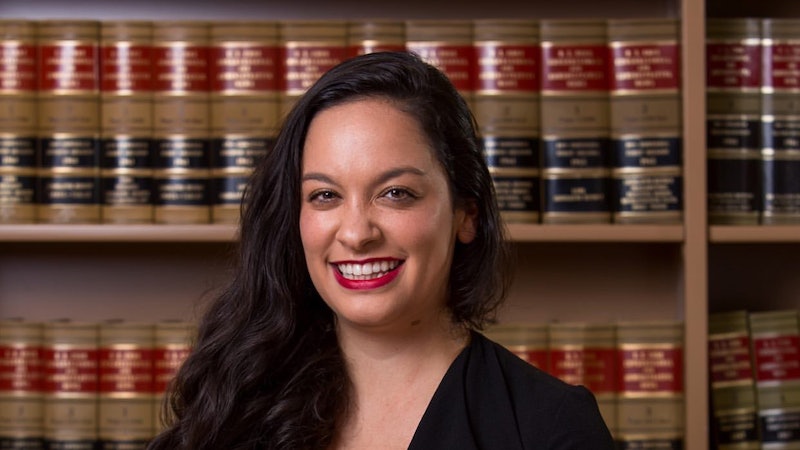 As a Latinx immigration lawyer, Nubia Batista's job has always been challenging. But since President Donald Trump took office, the Mexican-Panamanian attorney says practicing law has become more stressful and traumatizing than ever before.

“The Trump administration, which has been so efficient in creating policies and little regulations and rules that really stick it to people, has impacted lawyers, especially those working with immigrants and detained people,” Batista, who is based in Chicago, tells Bustle. “The trauma from the ICE centers, the way that the courts are set up, just seeing this mass of people, all who look like me, like my family, who are being told that they don’t have the right to be here, has made an already trying experience tenfold.”

Since entering the White House on Jan. 20, 2017, the Trump administration has proposed or implemented policies on a vast range of immigration issues, touching on everything from refugee resettlement programs, admissions from majority-Muslim countries, asylum, border patrol, and deportation. With the almost-constant political blows, online communities like Latinas Uprising and Hermanas in the Law have had to adjust the mission of their platforms. Originally meant to inspire, empower, and represent Latina lawyers and law students, the groups now also assist Lawtinas — a portmanteau of the words Latina and lawyers — in working through their stress and anxiety over the current political climate.

Batista, the founder and editor of Latinas Uprising, changed the political position of her educational blog almost immediately after Trump was elected to office.

Her site now has a disclaimer about politics. While still nonpartisan, it currently states that the community supports progressive policies that further the health and quality of life for Latinxs and immigrants.

Latinas account for less than 2% of U.S. lawyers, according to the Hispanic National Bar Association, and leaders of these online communities say they are often among the law professionals who are most impacted by Trump’s policies. Not only do directives like Trump’s most recent rule to deny green cards to migrants who use public assistance potentially add to Lawtinas’ casework, but they might also threaten the future of their own non-citizen loved ones.

"Part of me is still hopeful that there’s good that can be done within the system that we were given."

The growing need to serve Lawtinas through these uncertain times prompted Hermanas in the Law to similarly adjust its mission. While the digital space was created more than a year after the president took office, to highlight the work of Lawtinas and those who aspire to practice law, users began to organically engage in conversations about the impact Trump’s directives could have on their clients and voice their anxieties to a network of women who understood them. The online community, which is present on both Instagram and Facebook, has now also become a site for legal and political discussion, problem-solving, brainstorming, and comfort — support that has benefited both the community’s more than 7,800 followers as well as its creator.

Paulina Vera, an immigration defense lawyer, knows the consequences of Trump’s anti-immigrant agenda. Outside of her already-taxing work schedule, the Washington DC-based Peruvian-English attorney feels overwhelmed just staying up on the news and understanding the meaning and implications of policies and announcements coming out of the White House. Increasingly, she finds herself comforting frantic clients who call her in fear that they will be deported, and combating misinformation about legislation or ICE raids they might have received from a Trump soundbite or within their community. Recently, one of those clients, feeling hopeless after ceaseless news reports about violence against immigrants and the growing barriers they face on their path to citizenship, self-deported back to Africa.

“The root of immigration law is racist as hell and not welcoming, but I guess part of me is still hopeful that there’s good that can be done within the system that we were given,” Vera tells Bustle. “It just feels like there are a lot of people who are believing this less and less and are hopeless, and that makes me sad as an advocate and as a human being.”

Through Hermanas in the Law, which Vera founded in February 2018, Lawtinas often discuss ways the law can be used to help their communities. Sometimes, users send Vera a direct message, knowing that she will blast their question on an Instagram Story to field responses that might be helpful to the inquiring attorney or law student. Other times, women who learn about each other through the platform meet up in real life to think through legal ways to push back on the Trump agenda. Often, the space is also used for discussion on hot-button issues. For instance, Hermanas in the Law recently posted a Washington Post article about Trump’s lack of black and Latinx nominees for circuit court judges, engaging the community in a conversation about the lasting impact this could have on communities of color.

Still, it’s the support Hermanas in the Law offers that many of the users appreciate most. From fundraising for migrant families to comforting one another through their frustrations and anxiety, the community is invested in the lives of Lawtinas and law students. In August, when Danae L. Rosario, a first-year law student at Northeastern University in Boston, opened up to the community about struggling through the LSAT, women showered her with encouraging comments. The Dominican Republic-born aspiring attorney, who was working full time while studying for the test, stressed that the Trump administration’s constant attacks on her community were an additional mental burden that made the exam and applying for law school debilitating.

“It was very emotional,” Rosario tells Bustle. "It would upset me to an extreme that I would be in tears most of the time.”

Recognizing the toll the political climate took on her mental health, Rosario started seeing a therapist earlier this year. Outside of sessions, she says Hermanas in the Law has also been a helpful space for resources, like finding a scholarship she applied for, and reassurance that women who look like her do the work she hopes to do.

"Nobody else understands the battle it is like another Latina."

As a low-income Afro-Latina immigrant who herself was once undocumented, the already-trying law school experience, she believes, is likely more burdensome for her than many of her classmates because of impostor syndrome, finances, and the constant political attacks on her community.

“I know nobody else understands the battle it is like another Latina,” Rosario, who hopes to practice criminal law, says. “In class, we are all suffering through course work together, but my classmates might not understand what it feels like to have worked all of undergrad and have had to work while studying for the LSAT. They haven’t had to deal with the discrimination I did, likely didn’t come from a single-parent home, and didn’t personally battle the immigration system.”

For Rosario, online communities like Hermanas in the Law and Latinas Uprising offer evidence to aspiring Lawtinas that, regardless of the systemic, economic, mental, and growing political barriers they face, they, like the women behind the pages, can reach their educational and professional goals.

Maritza Perez, senior policy analyst for criminal justice reform at the Center for American Progress, believes this is the most important role online Lawtina communities play: encouraging and helping more Latinas to enter the law field. Perez, who is based in Washington DC, works closely with members of Congress, analyzing federal laws and helping them create legislation that benefits people who are currently and formerly incarcerated. As a Mexican-American woman, it’s crucial for the lawyer to include provisions that ensure the contents of the legislation apply to undocumented immigrants. However, under the political climate, she said doing so has become “toxic” for lawmakers. As a result, much of the language she crafts for bills that would help non-citizens with criminal convictions are stripped.

“It’s hard when there isn’t a critical mass pushing for things you want or the things that could improve our communities,” she tells Bustle. “So I think by continuing to inspire people to go into the law, especially now, it could really help us with our goals. These places need to be diversified and have the broadest range of experiences making decisions that influence what happens in our world.”

That’s the sort of impact in the legal field that Batista wants Lawtinas to provoke. “I like to look at it legally. When you have a case law, the judge makes a decision. Sometimes, there’s an exception, and, as lawyers, we always look at the exception to see if we could use it to help other cases and clients. If we push more for the exception, then suddenly the exception becomes the rule,” Batista explains.

“This is similar: The statistics may be against us and the system isn’t made for us, but the more of us that we push through to get these positions, the bigger difference we can make,” she adds.