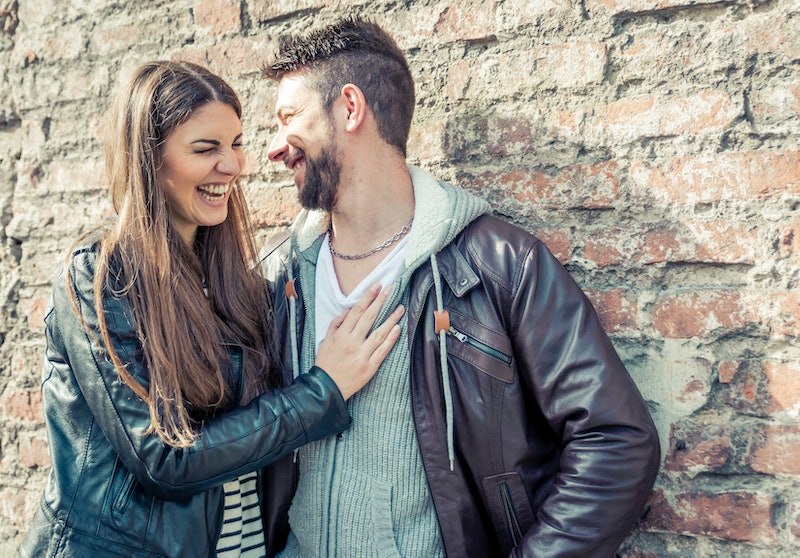 When it comes to what you're looking for in a potential partner, pretty much everyone I know would say a good sense of humor. In fact, most people I know would say that a sense of humor is the most important thing in a relationship. It probably is for me, too. But it is as simple as having a 'good' sense of humor? New research from Professor Jeffrey Hall at the University of Kansas says that is may be more nuanced than that.

“People say they want a sense of humor in a mate, but that’s a broad concept,” Hall said in a press release. But Hall has now looked at it in specifics. He looked at the results of 39 studies— containing over 15,000 participants– to find exactly how humor and a sense of humor affects relationships. The findings will be in the next journal Personal Relationships.

I think it makes so much sense to look at this more fully. Because I'm not even sure what a 'good' sense of humor is. That's so vague— and everyone I know has some sense of humor, who's to say what's good and what isn't? And is laughter really enough to make a relationship better or is it just the bare minimum of being a pleasant person? Well, here's what the study found— because laughing can definitely help a relationship, but it's a double-edged sword.

The study found that it's not so much about being able to take (or make) a joke— or even necessarily about laughing at the same thing. “That people think you are funny or you can make a joke out of anything is not strongly related to relationship satisfaction," Hall said. "What is strongly related to relationship satisfaction is the humor that couples create together." It totally makes sense.

One of the best parts about having a good sense of humor isn't just laughing at the same movies, it's being able to be goofy and silly and make each other laugh. It's so much more important to be able to laugh and create humor together than just have a sense of humor.

But Here's What You Need To Look Out For

Remember what I said about a double edged sword? There's definitely a line where a sense of humor can go ugly. “Having an aggressive sense of humor is a bad sign for the relationship in general, but it is worse if the style of humor is used in the relationship,” Hall said. “If you think that your partner tells mean-spirited jokes, then it's likely you’ve seen that firsthand in your relationship.” There's a difference between teasing and making nasty jokes at someone's expense— it's hard to describe, but you know it if you've been the subject of it. In a relationship, it can be really toxic. So make sure that the laughter you're making together isn't damaging one of you— or your relationship.

Creating humor together is one of the most joyful parts of a relationship — and now we can see it's linked to relationship satisfaction. So keep laughing, but keep it positive.