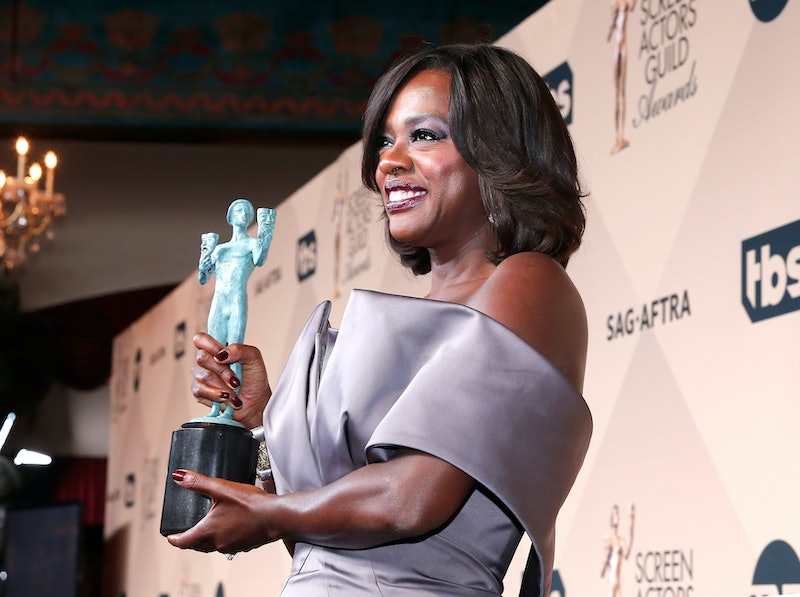 For those of us who monitor Hollywood like it's our job, awards season annually brings new meaning to the term "Sunday Funday." Like the Golden Globes, Emmys, and Oscars, the Screen Actors Guild Awards are also broadcast in the last waning hours of the weekend. This year, the SAGs will air on Jan. 29 at 8 p.m. ET on TBS and TNT. Obviously, you're going to tune in, but should you be worried about a late night and a subsequent awards show hangover? To adequately prepare, you'll need to know how long the 2017 SAG awards will be.

Here's some good news for your sleep debt: as award shows go, it's definitely on the shorter side. According to the TV listing, the SAG Awards will last for two hours and are scheduled to end at 10 p.m. ET. The SAGs are not the marathon of snacking, snarking, and live-tweeting that the Oscars and the Globes are. And since the Screen Actors Guild ceremony falls between those two, it offers a nice, chill respite.

The length of the show doesn't reflect its significance, however. The Screen Actors Guild awards are always interesting, because they show which performances inspired other actors the most this year. Here are a few more reasons why you shouldn't skip watching the SAGs:

For The "I'm An Actor" Montage

It's the SAG Awards' calling card. In place of a production number, the show's introduction is simple, funny, and poignant. The camera darts around the room, closing in on nominated actors, presenters, and guests, who each tell a story about their experience in the business or their craft. Each one closes out with, "and I'm an actor." The personal nature of the bit sets the tone for the rest of the evening, and you get to learn new things about performers you admire.

For The Ensemble Awards

The SAGs are the only major award show that honors ensembles from TV and film and not just individuals. It's a testament to that old acting adage that "there are no small parts." Will those trophies go to the cast of Moonlight or Fences? The Crown or Stranger Things? Black-ish or Veep? The SAG ensemble categories recognize performance and how well these groups of actors work together, which can make or break a movie or series.

Tomlin joins the ranks of past honorees like Rita Moreno, Dick Van Dyke, James Earl Jones, Mary Tyler Moore, and Debbie Reynolds as the recipient of the Screen Actors Guild Lifetime Achievement Award. No doubt the SAGs have put together a montage of career highlights like Rowan & Martin's Laugh-In, 9 to 5, and her current role as one half of a newly single best friend duo in the Netflix series Grace & Frankie. And since she's one of the business's most decorated comedians, her speech is bound to be as hilarious as it is appreciative.

The Golden Globes tend to be thought of as "the fun one." Stylists bring out the big guns for the Academy Awards, which is the more formal and widely seen ceremony. But every year, a few of my favorite looks come out of the SAG Awards. Stars tend to go sleek and understated for this broadcast, instead of taking big risks. So though it's not the most exciting red carpet, it may be the most consistent one.

The SAG Awards aren't much of a time commitment — just a concentrated dose of Hollywood glamour and actors supporting actors.