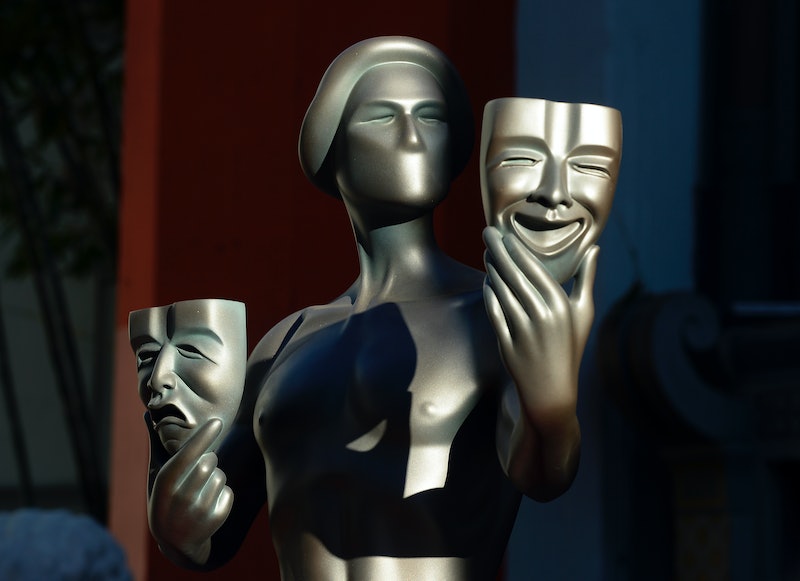 When does the Oscar race actually start? The most overzealous prognosticators might tell you that it starts at the Sundance Film Festival every January, as indie filmmakers roll out their promising new movies; it's where recent films like Boyhood, Whiplash, and Brooklyn had their premieres 12 months before they landed Best Picture nominations. Others will tell you the race starts when the various critics groups start announcing their nominees, from the Golden Globes to the Critics Choice Awards and the National Board of Review. The most conservative of pundits will tell you that it doesn't officially start until the Screen Actors Guild Awards unveil their winners. With that ceremony taking place on Saturday, many film fans are likely wondering: do the SAG Awards predict the Oscars?

Actually, when it comes down to matching up with eventual Academy Award winners, the SAG Awards are probably THE single best barometer of the year... and that's all because of who's doing the voting. While the Golden Globes and other critics' prizes are important for getting a general sense of popular sentiment, there's one huge flaw with using them as predictors for the Oscars: there are no journalists in the Academy of Motion Picture Arts and Sciences, which means there is zero overlap between those voting bodies. AMPAS consists entirely of industry professionals (including directors, screenwriters, cinematographers, composers, etc.) and actors make up the largest of the Academy's 17 branches, with over 1,100 members — almost all of whom will be casting their Oscar ballots just two weeks after having picked their SAG winners. (SAG voting closed this Friday, Jan. 29, while Oscar voting opens on Friday, Feb. 12.)

It's hard to imagine many of the Acting branch voters changing their minds in that short of a time span, so any surprise upsets in the acting categories will come from the other 16 branches that are all chiming in with their disparate opinions. But even still, the SAG and Oscar winners line up more often than they don't. The past two years in a row, the four acting winners have matched up 100 percent: Eddie Redmayne, Julianne Moore, J.K. Simmons, Patricia Arquette, Matthew McConaughey, Cate Blanchett, Jared Leto, and Lupita Nyong'o all won a SAG Award before going on to claim their gold statue at the Dolby Theatre. The last time anyone triumphed at the Oscars without a corresponding SAG victory was 2012's Supporting Actor winner Christoph Waltz (Django Unchained) — but only because he was submitted in the Lead category with SAG instead.

In fact, according to the list of winners from both the Oscars and SAG, out of the 21 years that the Screen Actors Guild has been handing out awards, their winners have lined up 4/4 with the Academy six times, and have matched up 3/4 eight times. They've only gone 2/4 four times and 1/4 three times. (They've never gone 0/4.) The last time they only matched up 50-50 was in 2008, when there was category confusion over Kate Winslet's two performances. (At SAG, she submitted as Lead for Revolutionary Road and Supporting for The Reader, but was made to compete in the Lead category for The Reader at the Oscars at the expense of her other role.) And the last time the two ceremonies only had one winner in common was 2002, when the only overlap was Catherine Zeta-Jones' Supporting Actress win for Chicago.

If the pattern of the last two years continues, then expect all four names you hear announced this Saturday to be announced again from the stage of the Dolby Theatre in February. Or, if general SAG history holds true, then expect three of the four names to be announced again at the Oscars. Of the two scenarios, the latter seems the more likely — mostly due to the Supporting Actor race. That category has the least correlation this year, with only two performers showing up at both SAG and the Oscars: The Big Short's Christian Bale and Bridge Of Spies' Mark Rylance. While SAG went with Idris Elba (Beasts Of No Nation), Michael Shannon (99 Homes) and Jacob Tremblay (Room) to round out their five, the Academy instead went with Tom Hardy (The Revenant), Mark Ruffalo (Spotlight), and Sylvester Stallone (Creed). In fact, despite his SAG snub, Stallone is still considered by many to be the frontrunner to win the Oscar... so whoever takes home the SAG Award for Supporting Actor this weekend will likely have to defer to Rocky Balboa himself when the big night comes next month.

But there's another category at the SAG Awards: Outstanding Performance by a Cast in a Motion Picture, the ceremony's version of a "Best Picture" prize. Is this category as accurate at forecasting the eventual Oscar winner as the individual acting categories? Not quite. While the Academy's top prize awards every facet of a film, including all of its technical aspects, the SAG Best Cast prize focuses specifically on acting — meaning films with a sprawling cast of well-liked actors often take the prize, even over eventual Best Picture winners. This is how movies like American Hustle, The Help, and Inglourious Basterds triumphed at SAG before they ultimately lost the Oscar to 12 Years A Slave, The Artist, and The Hurt Locker , respectively.

In fact, according to the winners lists from both ceremonies, in the 20 years the Best Cast category has existed, the winner has only lined up with the Oscars 10 times — a perfect 50-50 track record. A much more reliable indicator of an eventual Best Picture win is actually a Best Cast nomination, not a win. No film has won Best Picture at the Oscars without a SAG nomination for Best Cast since 1995, the first year the category was introduced, when Braveheart won the Oscar without a corresponding nod from SAG. That fact is actually very telling this year, when the only films that overlap between the two categories are The Big Short and Spotlight. (SAG voters went for Beasts Of No Nation, Straight Outta Compton, and Trumbo over the other six eventual Best Picture nominees.) The lack of a Best Cast nomination certainly puts a damper on the Oscar chances of Golden Globe winner The Revenant or critical favorite Mad Max: Fury Road.

A more reliable Oscar forecast than the SAG Best Cast award is the Producers Guild's Best Theatrical Motion Picture award. Both the PGA and the Academy expanded their Best Picture categories from five and switched from a plurality vote to a preferential ballot system in 2009. In the six years since that change took place, a glance at their winners lists will reveal that their respective Best Picture winners have matched up 100 percent (including a SAG tie in 2013 between Gravity and Oscar winner 12 Years A Slave). Even before that change, they still had a good track record, matching up nine out of the last 10 years (only missing when PGA gave Best Picture to Little Miss Sunshine and the Academy to The Departed ), and 20 out of the 26 years the PGA has been giving out awards. This certainly bodes well for The Big Short , which just took home Best Picture at the PGA Awards last weekend.

Given the relative insignificance of SAG's Best Cast award in the prediction game (at least when compared to the PGA's Best Picture award), a loss this weekend wouldn't be crippling for The Big Short. If Spotlight takes it instead, The Big Short will remain the frontrunner even as the competition perhaps gets a bit tougher. Obviously, if any of the other three films takes it, the status won't change — given that none of them are even nominated for Best Picture at the Oscars. And if The Big Short emerges victorious with SAG in addition to their PGA win, well... this might be a done deal.

But even with all of these correlations and patterns and prognosticating, the race won't truly be over until the envelope is opened at the 88th Academy Awards. This is the most wide-open Oscar season in recent memory, with five of the eight Best Picture nominees (The Big Short, Mad Max: Fury Road, The Martian, The Revenant, Spotlight) all considered legitimate contenders for the prize. (It would only really be a shock if Bridge Of Spies, Brooklyn, or Room walked away with the trophy.) We'll find out whether history will be made — or simply reaffirmed — when Chris Rock hosts the Oscars on Sunday, Feb. 28.

More like this
Remember When Benedict Cumberbatch Announced His Engagement In A Newspaper Ad?
By Hugh McIntyre
Tom Cruise Gives His Honest Review Of Lady Gaga’s New Song For 'Top Gun: Maverick'
By Hugh McIntyre
Regina King Puts Her Career, Family, & Friends Before Romance
By Jake Viswanath
What’s New On Netflix: A Victoria Justice Rom-Com & The Return Of David Letterman
By Arya Roshanian
Get Even More From Bustle — Sign Up For The Newsletter