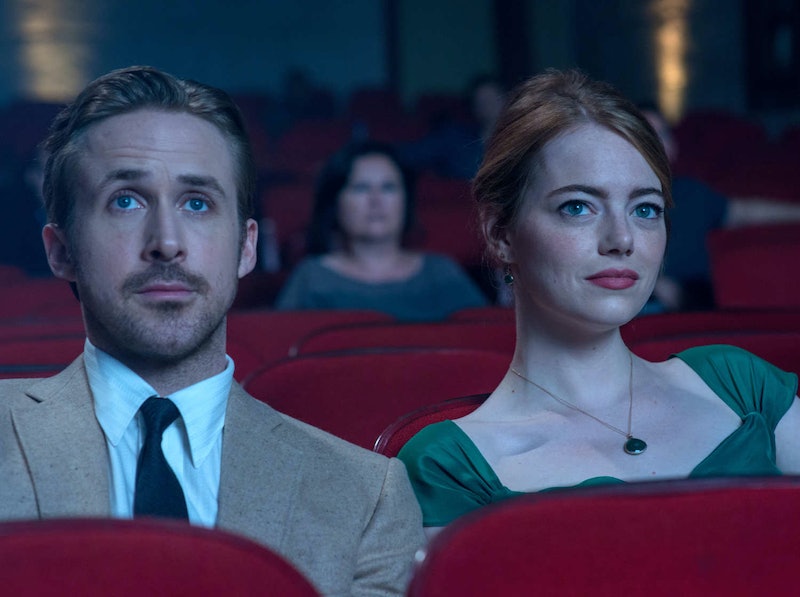 The race to the Academy Awards starts early in the year, as hopeful contenders play at film festivals, drum up buzz, and plan their campaign strategies months before they actually debut for general audiences later in the fall. But the 2017 Oscar race didn't really start to take shape until the past couple of weeks, when the various industry guilds started chiming in with their nominations for the best films, directors, and actors of the year.

It is, of course, helpful in building momentum to earn awards from film festivals, critics groups, and the Golden Globes (which are voted on by the Hollywood Foreign Press Association), but when it comes down to it, no critics or journalists will be casting ballots for the eventual Oscar winners. Those are voted on by the Academy of Motion Picture Arts and Sciences (AMPAS), an organization consisting of industry professionals, including actors, producers, writers, composers, cinematographers, costume designers, and more.

I've separated films into tiers, based on their guild nominations, and determined what that may mean for the 2017 Oscars. Each movie has been nominated at least once by one of the five major guilds: PGA, DGA, SAG, WGA, or ACE.

Only two contenders this year have a perfect score from the five major guilds, and they're both small indie dramas that constitute two of what are generally considered 2017's three frontrunners. (More on the third in a moment.) Both Manchester By The Sea (about a man charged with caring for his nephew after his brother's death) and Moonlight (about a young, queer black boy growing up in the projects of Miami) were part of the 10 films nominated for the PGA's Best Picture award, the DGA's Best Director award, SAG's Best Ensemble award, WGA's Best Original Screenplay award, and ACE's Best Editing — Dramatic award.

The next tier of films include two films that missed only one major guild nomination — and the same one, at that. Neither La La Land nor Arrival earned a Best Ensemble nomination from SAG — and no movie has won Best Picture at the Oscars without one since Braveheart in the first year of the SAG Awards' existence, 21 years ago. That's a big hurdle for both films to overcome — but La La Land at least has something of an "excuse," since the entire film centers around the two leads played by Emma Stone and Ryan Gosling, with no other character earning more than approximately seven minutes of screen time. If any film can break the long-standing correlation between Best Ensemble and Best Picture, surely it's the critically acclaimed musical. (It just earned a record-breaking seven Golden Globes last weekend.)

Despite their absence in the Best Ensemble race, both films still have performers competing in individual categories: Stone and Gosling in both Lead categories for La La Land, and Amy Adams in Best Actress for Arrival. They also earned nominations from the PGA, DGA, WGA (Original for La La Land, Adapted for Arrival), and ACE, as expected.

There are four films this year that earned nominations from three out of the five major guilds, but these two get their own higher tier, since they got that most coveted of Oscar precursors: the Best Ensemble nomination. (Fences also has stars Denzel Washington and Viola Davis competing in Best Actor and Supporting Actress, and Hidden Figures has Octavia Spencer in the Supporting Actress race.)

Both Fences and Hidden Figures missed the same two guilds: DGA and ACE, meaning they both made it into the PGA's field of 10 Best Picture nominees, and both of their screenplays made it into the Adapted race with the WGA.

Yes, you read that right. Surprisingly, Deadpool has proven itself to be a formidable contender in the Oscar race this year, landing nominations from over half of the major guilds. It sits right alongside the critically acclaimed Western Hell Or High Water with nominations from the PGA, the WGA (Adapted for Deadpool, Original for Hell Or High Water), and ACE (Comedy for the former, Dramatic for the latter). The Western gets a slight one-up on the superhero film for the fact that it does have a performer competing in an individual category at SAG (Jeff Bridges in Supporting Actor), while Deadpool goes unrepresented there.

So is Deadpool a sure-fire Oscar contender? Not necessarily; all three of its guild nominations can be explained in some way. Its PGA nomination came in a field of 10 (the Oscars' Best Picture lineup is likely to be smaller), and that guild tends to honor the occasional high-grossing blockbuster (Skyfall, Bridesmaids, Star Trek, etc.) that the Academy always goes on to ignore; it is unlikely to repeat its Adapted Screenplay at the Oscars, given that nominees Moonlight and Loving, which are competing in the Original category at WGA, are being shifted into the overcrowded Adapted category by the Academy; and the movie's ACE nomination came in the incredibly light Comedy category. Deadpool may show up in a couple of technical categories, but don't bet on a Best Picture nod.

Lion, based on the true story of an adopted young man who seeks out his birth family, had been falling short almost everywhere, showing up in the PGA's field of 10 Best Picture nominees, but snubbed by SAG Ensemble, WGA, and ACE (save for individual SAG nominations for Supporting players Dev Patel and Nicole Kidman). But never underestimate the power of Harvey Weinstein, Oscar Whisperer™. This Thursday, when the DGA announced its nominees, Lion filmmaker Garth Davis' name was called not once but twice: as a shocker in the Feature Film category, alongside expected contenders La La Land's Damien Chazelle, Moonlight's Barry Jenkins, and Manchester's Kenneth Lonergan, and again in the First-Time Director category alongside the likes of Deadpool's Tim Miller and 10 Cloverfield Lane's Dan Trachtenberg. That stunning coup makes Lion almost a surefire bet for an Oscars Best Picture nomination.

Meanwhile, WWII film Hacksaw Ridge landed nominations both from the PGA and from ACE in the Dramatic category, failing to show up in DGA, SAG Ensemble, or WGA (star Andrew Garfield did earn a nod in the Best Actor race at SAG, however), leaving the film's status as an Oscar contender a bit unclear.

Finally, there's the bevy of films that earned a nod from just one of the five major guilds. The most surprising of them all is the quirky indie drama Captain Fantastic, which earned not only a surprise Best Actor nomination for Viggo Mortensen at SAG (a surprise that he's gone on to replicated at the Golden Globes and the BAFTAs, and will likely replicate again at the Oscars), but also for the film's entire cast in the Best Ensemble category. However, SAG's Best Ensemble field rarely lines up with the Best Picture nominees 100 percent (last year, only two Ensemble contenders made the eventual Oscar lineup), so don't expect to see Captain Fantastic show up in that category on announcements day.

Both Loving and Nocturnal Animals landed nods from the WGA, the former in Original and the latter in Adapted; but both of those films are less likely to reap Oscar nods, thanks to shifting eligibility rules.

Finally, Hail, Caesar!, The Jungle Book, and The Lobster all earned nods for their editing in ACE's light Comedy category, which doesn't mean much for their Oscar chances.

So, if we look at just the films in the top five tiers — all the films that earned more than one major guild nomination — there is a list of 10 movies:

Is this our exact Best Picture lineup at the Oscars next month? Not likely, and for several reasons.

Firstly, while the PGA nominates a hard 10 films in its Best Picture category, the Academy has odd rules that allow anywhere from five to 10 nominees each year, depending on how many movies get a certain share of number one votes. Every year since that rule was instated, there have been either eight or nine nominees, so we're likely to lose at least one or two — maybe even three, if the field goes down to seven for the first time. We can assume that Deadpool is out, given the Academy's predilections, but what else? Hacksaw Ridge might be vulnerable, depending on how voters feel about nominating a movie by Mel Gibson, one of Hollywood's most controversial figures.

Secondly, that list of 10 matches the PGA's nominees exactly — and that's a problem. You have to go all the way back to 1997 to find a year in which every single Best Picture nominee at the Oscars was first nominated by the Producers Guild; usually there is at least one (sometimes two) movies that the PGA ignored that still manage to make it into the Oscar lineup. (Last year it was Room; the year before that, Selma; the year before that, Philomena.)

So, which movie didn't make the PGA's top 10 that still has a chance at earning a Best Picture nom? From this list, it's probably Nocturnal Animals, given its surprising over-performance at both the Golden Globes (where it earned three nods, including two for Tom Ford for both Directing and Writing, and one shocking win for Supporting Actor Aaron Taylor Johnson) and the BAFTAs (where it earned the second-most nominations of the entire year, behind only frontrunner La La Land).

And from the long list of films that are entirely unrepresented by the five major guilds, Martin Scorsese's Silence probably has the best chance at breaking into the Best Picture field — given the sheer weight of the legendary filmmaker's name. But could the dark horse nominee be something none of us see coming? Jackie, Sully, Florence Foster Jenkins, Zootopia?

Or (gulp), will we really be saying "Best Picture nominee Deadpool" a few weeks from now? We'll find out when the Oscar nominations are announced on Tuesday, Jan. 24.

More like this
14 Women To Watch This Oscar Season
By Marina Watts
Everything You Need To Know About ‘Black Panther: Wakanda Forever’
By Bustle Editors
Lindsay Lohan & Jonathan Bennett Celebrated Mean Girls Day Very Differently
By Jake Viswanath
Christian Bale Sang With Taylor Swift & His Daughter Can't Believe It
By Radhika Menon
Get Even More From Bustle — Sign Up For The Newsletter