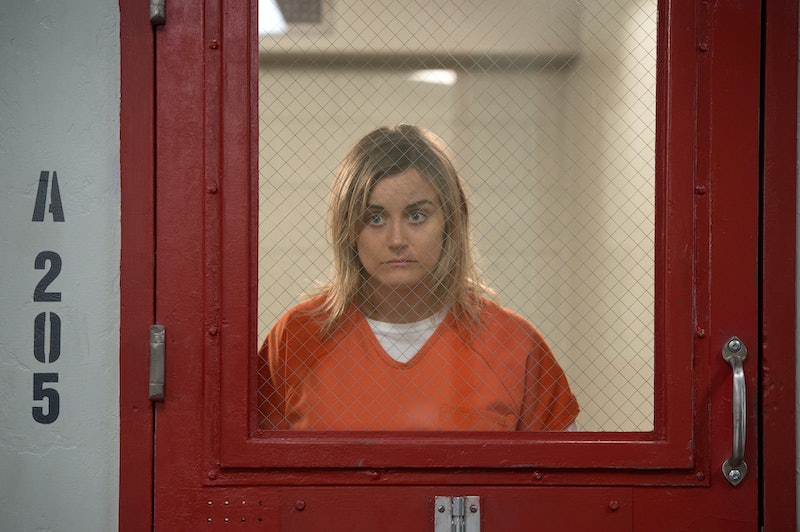 Spoilers for Orange Is The New Black Season 6 ahead. One major storyline on Orange is the New Black has come to a close this season, though it still raises a lot of questions. The entire series began following Piper Chapman from the beginning of her time at Litchfield but now that sentence seems to be over. Her release kind of came out of nowhere towards the end of the season, causing me to wonder: How long has Piper been in jail on Orange is the New Black? She's out now, but her early release was not necessarily all that early.

So, at the beginning of the series, Piper only had a 15 month sentence, but she got six extra months for her participation in the riot. At the beginning of season season, about a year had passed, so when she finally sees Alex again, Piper immediately starts talking about how she only has nine months left. But unlike other seasons that have taken place over smaller amounts of time, several months pass over this season and by Episode 13 of Season 6, Chapman has a mere five months left. Then, due to some shady budgeting deals, she is released early. Does this all add up?

For most of the series, the timeline has been relatively easy to track using holidays and Piper's birthday in June. (She spent her previous birthday with Larry, which is important to mark as well). Based on the "Mischief Night" episode early on in Season 6, the group gets into Max sometime in October, and it's definitely cold when Piper is released. Everyone is layered up on the kickball field, and Morello is significantly more pregnant than she was at the beginning of the season. Knowing the weather in upstate New York and how women's pregnancies vary, this could be well into March of the next year just a few weeks after the riot.

If Piper has served approximately 10 out of a 15 month sentence, got six months added and was then released with five remaining at the end of a season that spanned five months, that tracks well enough. Morello could easily be six months pregnant. That means Piper has been in prison for about 15 months — exactly her initial sentence. Whoa! This makes sense, because Taystee also goes to trial in Season 6, and the criminal justice system moves slowly, so it would take a few months for her case to make it before a jury.

The thing is, no matter how long Season 6 spans, it means that this season technically takes place in 2014 or even 2015, since the show premiered in 2013. That's also confusing, as there are a lot of references to things that have happened in the last five years, particularly in Season 6, that throw the timeline way off. There are references to serious current events like "building the wall," as well as smaller pop culture references such as Figueroa "binge watching" the TV show Younger.

"Theoretically we’re operating in the past," said creator Jenji Kohen in an interview with The New York Times. "But we want to address current events and feelings, so we may abandon the timeline. Piper will still have served the same amount of time, but we will be in the present day," she said. This isn't too surprising. Since the show is a satire, it makes sense that they might bend the rules of believability in order to comment on our current state of affairs.

In the same interview, Kohen says of Season 6, "Our Piper was sentenced to 18 I think we’re at about 10 months." So maybe Piper did get an extra three months added. Maybe this is just a continuity error we all have to roll with, and not worry about too much. Maybe Kohen misspoke. It happens. Clearly the show isn't holding too hard and fast to certain elements of the timeline, and that's OK.

In real life, Piper Kerman only served 13 months out of her 15 month sentence. So the early release makes a lot of sense. Perhaps Season 7 will offer further clarification on how long the fictional Piper was on the inside. And what she does with her new freedom.

More like this
Anthony Templet Wants To “Live Normally” After Killing His Father
By Brad Witter
Netflix Reveals First Look At Wednesday In The 'Addams Family' Spinoff Series
By Bustle Editors
Who Plays Trent In 'Never Have I Ever'? Benjamin Norris Calls His Character A “Himbo Stoner”
By Grace Wehniainen and Radhika Menon
What's New On Netflix: A Third '365 Days' Movie & Lili Reinhart’s New Film
By Arya Roshanian
Get Even More From Bustle — Sign Up For The Newsletter