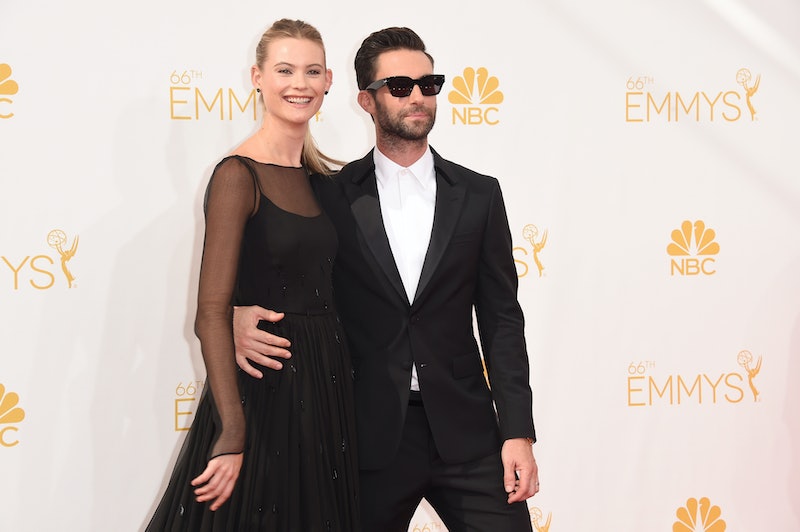 Because the event is hardly just about the football players, duh, a lot of celebs will be in the stands at the Super Bowl on Feb. 3, including, most likely, Adam Levine's wife, model Behati Prinsloo. Adam Levine and Behati Prinsloo have been together since the summer of 2012 — with one short break — and the couple seems as solid as a QB's biceps. Since Levine will perform at halftime with his band Maroon 5, you might have a chance to see some sweet moments between him and his wife, and perhaps even the couple's daughters, Gio Grace and Dusty Rose.

Seeing as Gio was only born in early 2018, don't be surprised if the younger child sits the big game out. But you very well could see her older sister, who was recently featured in Maroon 5's music video for "Girls Like You." While Levine and Prinsloo generally keeps their kids off of social media, save for the occasional blurry Instagram pic, the Super Bowl could be a public family affair.

On the other hand, Levine and Prinsloo, who married back in 2014, frequently celebrate each other's successes publicly, so you can probably expect Prinsloo to post something about her husband's Super Bowl show in the lead up to the big performance.

The news that Maroon 5 would be performing at the halftime show didn't come with the usual fanfare that Super Bowl performers usually receive. Quite the opposite, really, as a Change.org petition urged the band to drop out of the usually sought after spot in light of Colin Kaepernick's lawsuit against the NFL. When Andy Cohen asked Prinsloo Levine about the then-rumored performance on Bravo’s Watch What Happens Live in early October, the model responded, "I don’t know. I've heard nothing."

Now that the decision has been made, it seems most likely that Prinsloo will be there on hand, supporting her husband's decision to go forward with playing the halftime show along with special guests Travis Scott and Big Boi, though the mother of two hasn't spoken publicly about the even just yet.

But judging by the pair's past, the couple will always be there for her hubby. During that October interview on WWHL, Behati told Cohen that when she first met Adam, "It was kind of love at first sight." That was likely back in 2012, as the couple made their first official appearance together at the GQ Gentlemen's Ball that year, per US Magazine. Prinsloo confirmed in an interview with Porter that she and Levine split for a couple of months back in 2013, but they quickly found their way back to each other.

Now that seven years have passed since the couple first got together, their relationship is still going strong. On Father's Day of last year, Behati posted a photo of Adam holding Gio, and she wrote, "I’m so lucky to have you as a husband a lover and a friend. We love you. Life is better with you." And it seems like the pair still be posting mushy social updates for years to come.