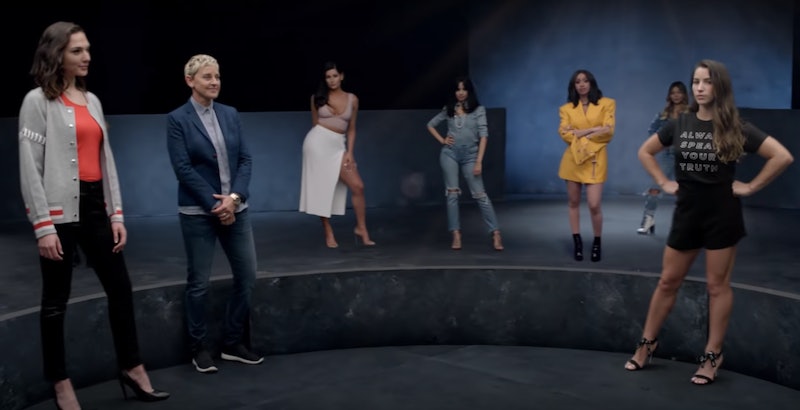 While it goes without saying that any collaboration with Cardi B is an epic event all on its own, her appearance in the Maroon 5 "Girls Like You" video is just one of many amazing cameos included in the new video. At first glance, it's nearly impossible to keep up with every powerful woman that graces the screen. That said, it's definitely something you're going to watch over and over again just to make sure you've taken it all in.

The video, which was released on Thursday, May 31, get a major hip-hop infusion with the appearance of Cardi as her feature spices things up a bit. As arguably one of the hardest-working women in the music industry, Cardi is a great addition to the female-centric video. Lending her magical lyrical touch to the song's remix, she raps:

"I'm sure them other girls were nice enough

But you need someone to spice it up

So who you gonna call? Cardi, Cardi

Come and rev it up like a Harley, Harley

Why is the best fruit always forbidden?

Throughout the course of the video, which is set on a minimalistic, revolving stage, Maroon 5's lead singer Adam Levine rotates, finding himself with another woman behind him every time he spins, eventually closing the spin with his wife, Behati Prinsloo and their daughter in his arms. In addition to Cardi and Prinsloo, the bevy of badass ladies featured include some majorly talented women.

Here's a breakdown of every single female force that makes an appearance in the new video:

Billboard Music Award-winning rapper Cardi B became a major part of this song and accompanying video.

"Havana" singer Camila Cabello made her presence known in the video.

Ibiza actor Phoebe Robinson entered to show off some of her dance moves.

Sarah Silverman candidly lip-synced along with Levine's words during the video.

Wonder Woman actor Gal Gadot showed up to give the scene a bit of superhero swag.

Author and founder of MuslimGirl.com, Amani Al-Khatahtbeh, made a powerful appearance.

Immigration activist Angy Rivera used the video as an opportunity to present a strong message with her t-shirt.

Well That Escalated Quickly author and comedian Franchesca Ramsey shined in the moment.

Although she decided to take a break from displaying her famous dance moves in this vid, Ellen Degeneres seemed to enjoy her time on the set.

Meanwhile, J-Lo couldn't help but to move her feet to the infectious tune.

Showing off her signature moves, singer and actor Mary J. Blige gave Levine a run for his money in the dance category.

Lady Bird actor Beanie Feldstein was all smiles in her cameo.

Activist and tribal land protector Jackie Fielder showcased her commitment to social change in the video.

Former professional racing driver Danica Patrick was part of the powerful group that joined forces for the project.

Ilhan Omar, who is a member of the Minnesota House of Representatives, and the first ever Somali-American Muslim legislator elected to office in the U.S., danced along to Levine's smooth vocals.

Model Ashley Graham also graced fans with her appearance in the video.

Last, but certainly not least, Behati Prinsloo was added to the mix as she and husband Levine hold tightly to their adorable daughter Dusty Rose.

The message of female empowerment can certainly be felt through each and every woman featured in the epic video, and it's a work of art that deserves to be talked about for a very long time.