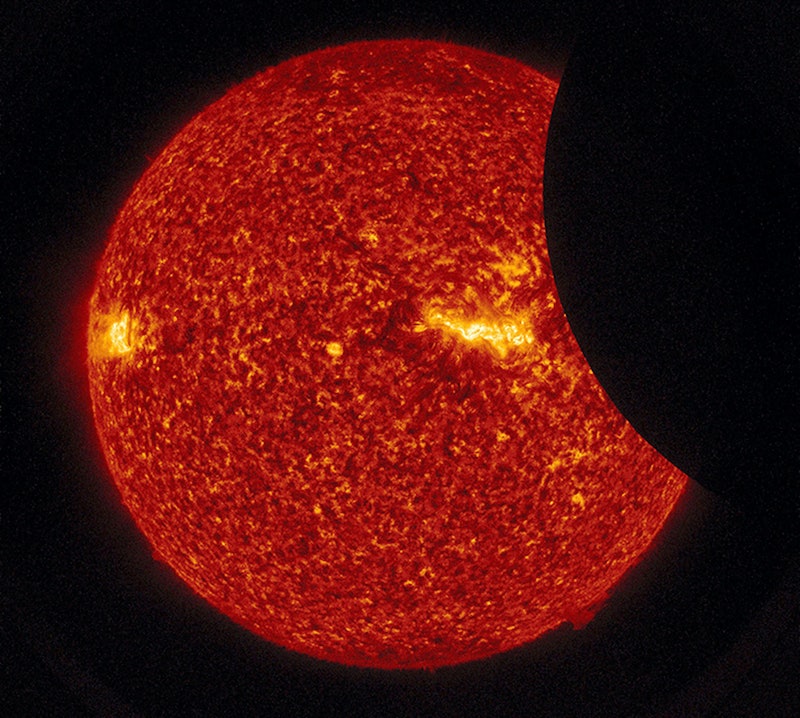 Up next on the calendar of summer celestial events is a partial solar eclipse on Aug. 11, 2018. The event will be only visible from northeast Asia, and northern and eastern Europe, so we while we won't get a chance to see the eclipse directly from where we are in North America, we can still check it out online, which is definitely something worth doing. How long the August 2018 partial solar eclipse is is part of the reason why it's so worth checking out online. Technically, a solar eclipse, even when it's partial, is a pretty big and drawn-out production. There's various stages in which the moon appears to take a bite out of the sun with its shadow: there's the beginning, in which the sun just starts to slowly disappear behind the moon, then the middle, which is also known as the peak, or maximum eclipse, and then the gradual end, in which the sun becomes completely visible again. This game of peek-a-boo spans over the course of hours, at a constant speed.

August 2018's partial solar eclipse will officially start at 8:02 a.m. Universal Time on Saturday morning (for the record, that's 4:02 a.m. EST). By 9:46 a.m. Universal Time (aka, 5:46 a.m. EST), the eclipse will reach its peak — in other words, the sun will look like the moon took a proper bite out of it. The entire event, from beginning, to peak, to fade-out, will last about three and a half hours. But the sight of the eclipse will change depending on where it's being filmed (or viewed), as the eclipse itself will move. As the sun rises in the east and sets in the west, the eclipse will move in that direction, too, giving many different viewers in different locations a chance to check it out — except for us of course!

The closer you are to the path of the maximum eclipse, the more of the eclipse you will see. So for us in North America, we won't see anything, as we're too far from the action. The sun will look just it always does, which makes the eclipse a mere illusion for viewers depending on where there observing from. Hence why it's worth it to check it out online, once you wake up. And of course by the time you wake up in North America, there will probably be sped up versions of the eclipse to watch online, in case you don't have a few hours to watch the gradual event.

Space.com created a graphic to illustrate the choreography of the partial solar eclipse:

As you can see, with so many moving parts, the eclipse will be a shape-shifting event, best viewed online, TBH. Honestly, I'm not just saying that to you make you feel better about being out of range for a natural viewing. This eclipse will be much cooler to watch from multiple angles and sources. You can check out the post-eclipse footage on The Weather Channel app, the Virtual Telescope Project or on the Youtube channel Space and Universe Official.