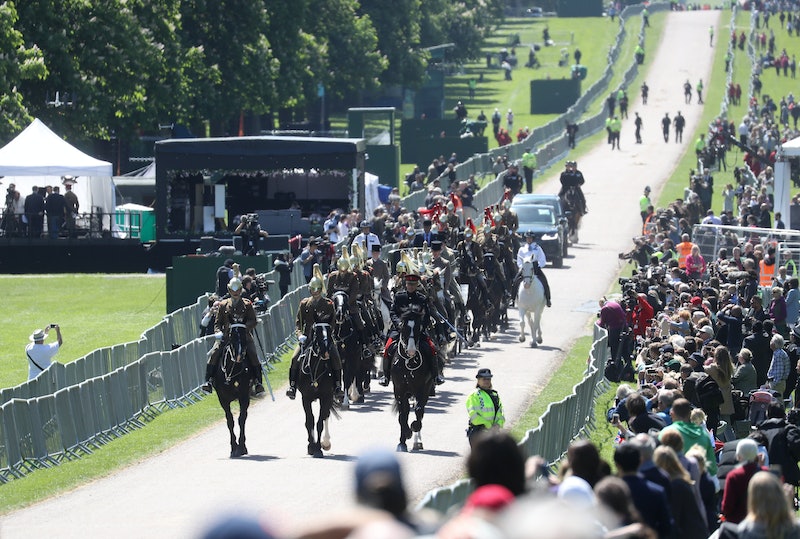 By 6 a.m. local time on Saturday, the tree-lined pathway leading to Windsor Castle was already filled with people eager to catch a glimpse of Prince Harry and Meghan Markle. This pathway is known as the Long Walk, and it is definitely long — it spans approximately 2.64 miles, from the edge of Windsor Great Park to the castle's gateway. During Saturday's royal wedding, the Long Walk will be the site of numerous events, most notably the royal wedding carriage procession following the ceremony.

Immediately after their vows and before their wedding reception, Harry and Markle will take a carriage ride through the town of Windsor. They will then return to Windsor Castle via the Long Walk, where thousands of spectators will be waiting to wish them well. The Long Walk has been lined with festive, hand-made decorations crafted by children and other local residents, as well as large screens that will live-stream the service. The Telegraph explained that the carriage procession will likely be one of the most photographed events of the year, and is an opportunity for members of the public to see Markle and Harry as they are still dressed in their wedding attire.

According to The Royal Borough Observer, there will be events on the Long Walk throughout the day. The Long Walk is expected to have a "summer fair"-like atmosphere, with food wagons, bars, and other concessions all along the path. The Washington Post remarked that street vendors were selling American and British flags to celebrate Markle and Harry's wedding.

In fact, some people have been camping out on the Long Walk for days, in anticipation of the royal wedding. Others camped overnight with sleeping bags that reserved their spots at the front of the crowd, and still others arrived at the crack of dawn.

Before the ceremony, Markle's car — a Rolls-Royce — drove down the nearly three-mile pathway, escorted by three Range Rovers. Markle arrived with her mom, and the two women were greeted with excitement from thousands of spectators who were waiting for them on the Long Walk. BBC footage showed a number of security officials lining the sunlit path as densely packed crowds of well-wishers waved American and British flags and cheered behind temporary barriers that were installed on either side of the road. Markle finally emerged from the car in front of St. George's Chapel, at the end of the Long Walk.

Ahead of the ceremony, royal guards could be seen walking in sync along the Long Walk, according to People. The royal marching band also crossed the Long Walk, playing for thousands of passionate royal wedding fans. Other photos from the Long Walk also highlighted some more memorable moments, including a group of women dressed in mock wedding gowns with signs announcing their presence to Prince Harry.

Spectators along the Long Walk joined security officials in a singalong, and well-wishers got creative with their signs. "Meghan suits you Harry," read one sign on the Long Walk, a direct reference to Markle's role on the show Suits.

The Telegraph reported that the Long Walk took on a more festive atmosphere throughout the morning, with free cardboard crowns and commemorative brochures being distributed to spectators. The food stalls lining the pathway reportedly handed out breakfast baps — soft bread rolls — to spectators huddled in blankets, and prosecco was a common sighting.

Thousands of people arrived in Windsor from all over the world to catch a glimpse of Harry and Markle on the day of their wedding, and many more viewed live-streams of the ceremony — not unlike the royal wedding between Prince William, Duke of Cambridge and Catherine, Duchess of Cambridge back in 2011.

More like this
Kim Kardashian Is Releasing A Line Of Earbuds With Beats
By Alexis Morillo
9 Unmissable Moments To Relive From The Commonwealth Games
By El Hunt
13 Photos Of Princess Charlotte Loving The Commonwealth Games
By Sam Rogers
25 Things I've Reduced My Life To, In Addition To WFH In My PJs
By Ginny Hogan
Get Even More From Bustle — Sign Up For The Newsletter