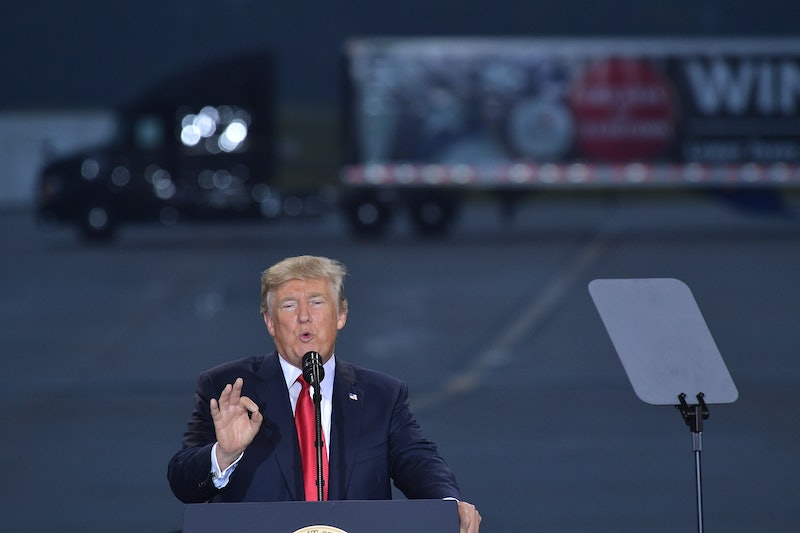 It's becoming clearer where the president stands when it comes to the crisis that Puerto Rico, the U.S. territory, is still grappling with weeks after Hurricane Maria. President Donald Trump's latest tweets on Thursday morning blaming Puerto Rico for their own predicament — which was, as a reminder, caused by a natural disaster — serve to underscore his position.

He quotes conservative journalist Sharyl Attkisson, who reportedly claimed on Sinclair Broadcasting that "Puerto Rico survived the Hurricanes, now a financial crisis looms largely of their own making" — and then he goes on to warn that those providing government aid on the island won't be able to stay there "forever." There have been calls for Trump to be more sympathetic toward the American citizens who make up the population of Puerto Rico — but for many critics, his latest tweets proved otherwise. After quoting Attkisson, Trump wrote on Twitter:

A total lack of accountability say [sic] the Governor. Electric and all infrastructure was disaster before hurricanes. Congress to decide how much to spend. We cannot keep FEMA, the Military [and] the First Responders, who have been amazing (under the most difficult circumstances) in P.R. forever!

Trump is correct in stating that Puerto Rico was facing a financial crisis before Hurricane Maria, but Attkisson's claim that it was "largely of their own making" is far more debatable. Part of the reason for their problems, for example, is the exodus of Puerto Ricans since 2000, driven by multiple factors, including infrastructure and high unemployment. The federal government could have stepped in to clean things up earlier, during the Bush or Obama years, but no one did. Claiming that the fault lies entirely or even largely with Puerto Rico itself is just as misleading as a claim that they had no fault at all would be.

What's not debatable at this point is that people across Puerto Rico are desperate for even the most basic resources. Only about 10 percent of the island currently has power, and only 64 percent has access to clean water. The EPA, for its part, has issued a warning against breaking into contaminated wells at toxic waste sites, which implies that this was a strategy that some people have resorted to. People in Puerto Rico have died from a treatable bacterial illness caused by drinking contaminated water, despite the fact that an American hospital ship is docked in Puerto Rico and only treating a tiny fraction of the number of people it has the capacity to help.

The government has already provided an impressive amount of aid to Puerto Rico, but the island simply needs more. And instead of agreeing to provide what Puerto Rican officials have requested, Trump has questioned their leadership and repeatedly praised the "amazing job" that his administration has done in the relief effort.

After a hugely damaging hurricane season, the United States has a lot of disaster relief on its hands. Hurricane Harvey relief in Texas and Louisiana is ongoing, but the president hasn't made any comments about how better urban planning in Houston could have prevented a disaster on that scale. The Florida Keys are also islands, but Trump hasn't made any comments about how that makes it more difficult to get relief there — as he did for Puerto Rico. And he's gone even farther today, by threatening the premature withdrawal of "FEMA, the Military [and] the First Responders" in his tweet.

As the president, Trump would have the power to force FEMA to withdraw from the island, leaving it unprepared to deal with the true humanitarian disaster facing it. He habitually makes empty threats in his tweets, though, so the people of Puerto Rico are probably hoping that this is just another one of them.