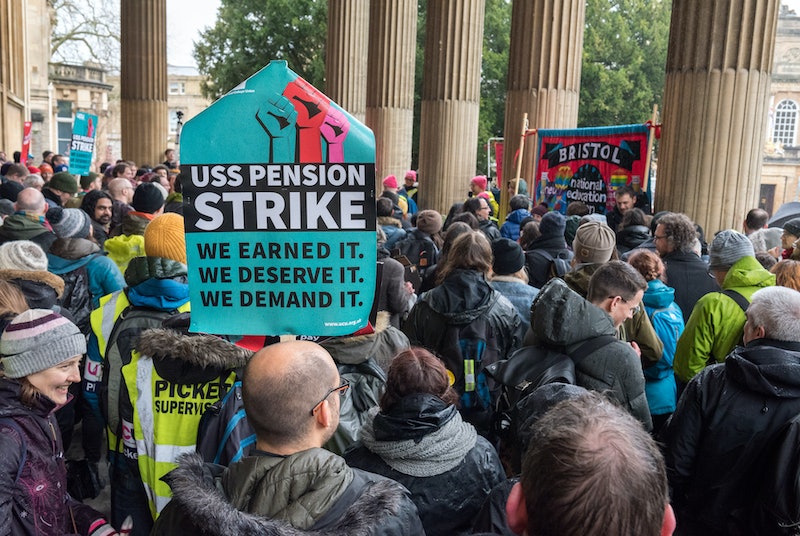 After months of failed negotiations, Thursday marks the start of “the largest wave of strikes ever seen” at UK universities. Staff at 74 higher education establishments will be walking out from Thursday Feb. 20, following Universities UK’s refusal to strike a deal with unions over pay and pensions. You might feel conflicted about strikes, wanting to support staff but also not wanting to miss out on your education. To answer your questions, here’s everything you need to know about the 2020 UK university lecturer strikes.

Who are the UCU?

The UCU are the University and Colleges Union, a body that represents more than 120,000 academics, lecturers and other staff members across further education facilities in the UK. They’re there to make sure university staff aren’t being exploited at work. Back in the autumn, their representatives at 60 UK universities voted to support this set of strikes, with a further 14 joining in January. As a union, they need a turnout of 50% for a strike to go forward, which they got.

Why are my lecturers going on strike?

With tuition fees tripling to £9,000 in 2012, it’d be fair to assume that staff at UK universities are being paid better with all that extra dosh. But that hasn’t been the case, with many lecturers feeling like they are watching their establishment turn into a business where only the people at the top, such as Vice Chancellors, benefit.

This time around, lecturers are particularly protesting a change to their pension schemes (the USS) which will see them lose tens of thousands of pounds. According to analysis by the UCU, after the changes, the average lecturer would pay £40,000 more into their pension but receive around £200,000 less in the end.

How long will the strikes go on for?

The strikes are taking place for 14 days over the course of four weeks. The first week, they’ll only be going on for two days, growing to three days in the second week, four in the third week and a full week starting March 9. The full list of dates can be found on the UCU website – if you have lectures on the days off from striking, they will still be going ahead.

How can I support my lecturers?

A lot of people don’t realise that university staff don’t get paid when they strike. That means that they’re losing out too – it’s not just students. Ways that you can support your lecturers include writing to your university in support of the strikes, refusing to cross picket lines on campus (which should be clearly marked out) and attending teach out events, where members of staff host talks and discussions about subjects or texts that aren’t necessarily on the curriculum.

Speaking to The Tab, UCU Secretary General Dr. Jo Grady said: “Staff take strike action like this when they know that, actually, the consequences of not doing so are far more detrimental in the longer term to their students. [Don’t] allow yourself to be weaponised and actually be proactive in trying to find ways to exert pressure on management.”

Will I get money back for missed lectures?

Just as university lecturers feel frustrated about not being paid when tuition fees tripled, it can be super frustrating as a student to know that you’re paying £9,000 a year and missing out on lectures when these strikes take place. But all hope is not lost, as money saving website Save The Student reckons you’re entitled to get compensation for your missed study hours.

They advise writing to your university and asking for the money back, with a UCU spokesperson saying: ‘Students should [...] be demanding that universities put the huge sums of money they will save from not paying staff during the strike into student-facing activities.

If your university refuses, you can take it higher where an independent adjudicator will consider your case. In 2018, the ombudsman advised that one UK university should give an international student £1,283.75 following the strikes, Save The Student reports. Worth a punt, eh?