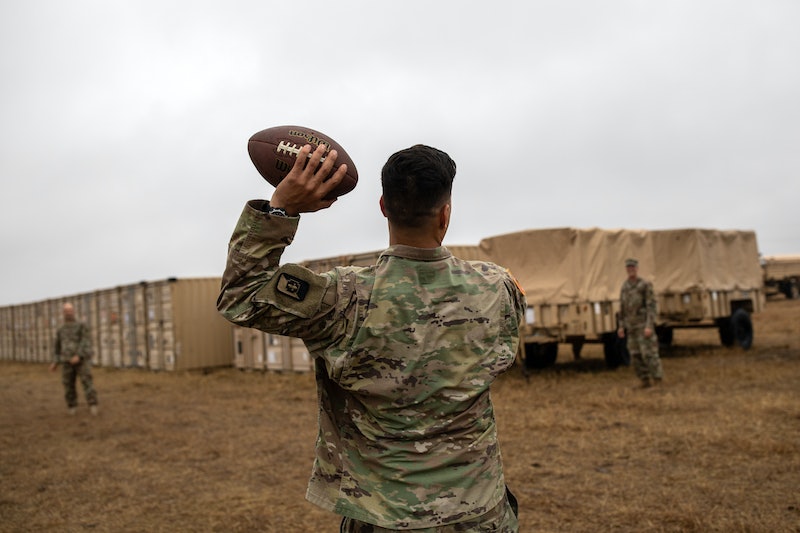 Almost 6,000 troops are currently deployed along the southwest border, tasked with supporting Customs and Border Protection as Central American migrants try applying for asylum. Positioning active-duty military personnel — rather than National Guard members — along the border was an unprecedented move, expected to last until Dec. 15. But how much longer troops will be at the border remains in question, after the Pentagon told NPR it plans to extend deployment into January 2019.

Their mission has been somewhat unclear from the beginning in early November. The New York Times reported that the troops were sent to provide logistical support to Border Patrol, which among other things, involved setting up hundreds of miles of concertina wire fences. Troops are not permitted to help directly enforce immigration policy, according to an 1878 statute that prevents the military from getting involved in executive matters, like law enforcement. However, that also means they won't be receiving combat pay or hostile fire pay, since they won't be dealing with migrants face-to-face.

"I think that it's very clear that support [for] the border police — or Border Patrol is necessary right now," Secretary of Defense Jim Mattis said while visiting the troops before Thanksgiving. It's worth noting that Mattis has long argued against politicization of the military.

But with some speculating that the president directed the troops to set up camp at the border in order to stoke right-wing fears about the caravan ahead of the midterms, it seems possible that politicization might have been the goal to begin with. The Times estimates that the cost of positioning the troops is at least $72 million.

The situation became more strained on Sunday, when hundreds of migrants — among them families with young children — attempting to avoid a Mexican police blockade near Tijuana ran toward the border crossing into California and were met with Border Patrol agents firing tear gas canisters. Homeland Security Secretary Kirstjen Nielsen defended the agents' actions saying that some of those attempting to cross were throwing projectiles.

The president responded by threatening to permanently close the border entirely and demanding that Mexico deport the migrants, many of whom are specifically seeking asylum to escape the violence of their home countries. "Do it by plane, do it by bus, do it anyway you want, but they are NOT coming into the U.S.A." he tweeted on Monday. "We will close the Border permanently if need be. Congress, fund the WALL!"

Even before the escalation, there were apparently suggestions that troops extend their stay at the border, missing not only Thanksgiving, but also Christmas and New Year's. "Some of those troops certainly will be home [for the holidays], I would anticipate they would be," Mattis told The Washington Post last week. "But some troops may not be or some new troops may be assigned to new missions... This is a dynamic situation."

The confrontation on Sunday seems to have amplified the administration's perceived need for military assistance on the border. It's expected that the Pentagon will make an official announcement about the extension, which includes swapping out some of the service members with fresh troops, by the end of the week.