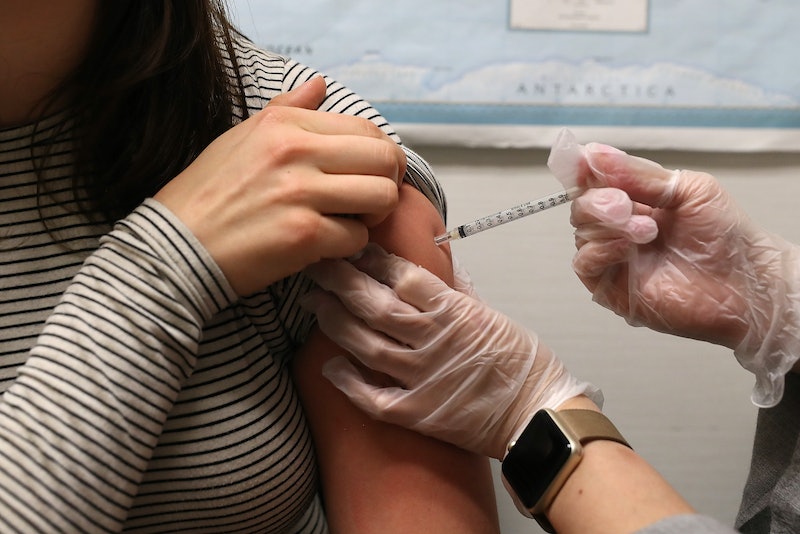 Almost half of all adults in the United States are skipping the flu vaccine this year, according to a new survey released by the University of Chicago’s research center (NORC). Despite warnings about the potential dangers of flu season, the number of adults who got their flu shot in 2018 is fewer than half — and most of the remainder don't plan to do so.

The remaining two percent of survey respondents said that either didn’t know if they would get the shot, or they didn’t answer the question at all. The current flu season is considered a mild one when compared to last year, CNN says, though the Centers for Disease Control (CDC) still recommend the flu vaccine as an important preventive health measure for most people age six months or older, according to TIME.

Last year was an especially dangerous flu season, CNN notes, with over 80,000 flu-related deaths in the U.S. alone. “We cannot claim that the 43 percent of vaccinated people is the reason for the mild flu season so far,” Richard Webby, a flu expert and consultant for the World Health Organization (WHO) told CNN. “We've got to keep in mind that it's still very, very early, and even at this time last year, there hadn't been a huge amount of activity either.”

According to the NORC flu vaccine report, survey respondents who don’t intend to get the flu shot said that they were concerned about the vaccine's safety and efficacy. (Experts say that the flu shot is overwhelmingly safe and effective.) Others said that they’re not worried about getting the flu in the first place.

“When asked why they do not intend to be vaccinated, adults were most likely to cite concerns about side effects from the vaccine (36 percent). Roughly [three] in 10 adults cited concerns about getting sick from the vaccine (31 percent). Three in 10 adults said a major reason they do not get vaccinated is because they never get the flu or they do not think the flu vaccine works (31 percent). Notably, people rarely cited barriers to access — such as the vaccine costing too much (6 percent) or not having time to get it (5 percent) — as reasons they would not be vaccinated,” according to the survey.

CNN reports that, according to the CDC it’s still not too late to get a flu shot if you haven't yet. Not only does the flu vaccine lessen your chances of getting the flu and developing potentially dangerous complications, it also helps keep the illness from spreading — especially among people with pre-existing health problems who can't get the vaccine, says TIME. If you do catch the virus, the vaccine can also help reduce the severity of the illness.