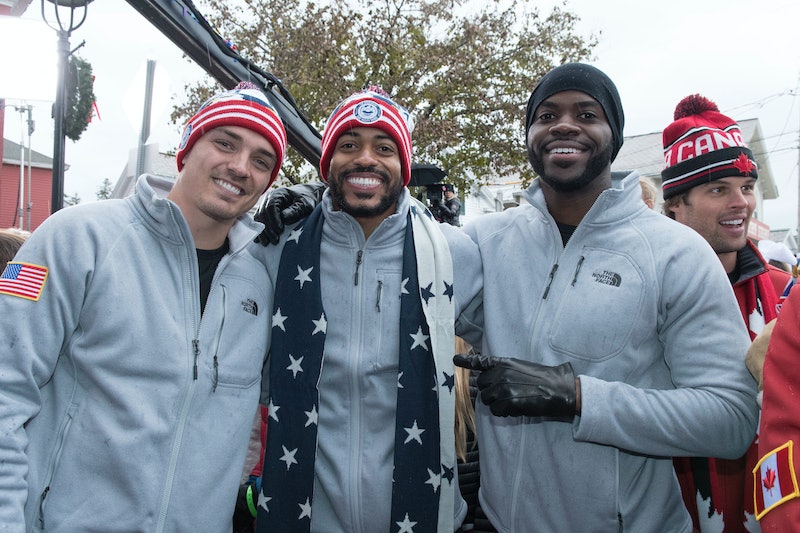 If you haven't heard, The Bachelor: Winter Games (executive producer: Nicole Woods) is officially happening. What makes it stand out from the rest of the franchise is it includes domestic and international Bachelors and Bachelorettes. Who knew there were other versions of the ABC dating competition series across the globe? And with that fun fact out in the open, how many countries have The Bachelor (series film editing: Debra Light)? Well, there are a lot, which just goes to show you that the U.S. isn't the only country that loves watching love blossom and fail on television.

On the Winter Games cast list, there are contestants from Canada, Switzerland, Germany, Australia, New Zealand, Finland, United Kingdom, Sweden, Japan, and China. So far, there are 10 people from the U.S. and 14 international. The Bachelor Facebook page notes that more cast announcement are coming.

In January 2016, Cosmopolitan compiled a list of the "22 Hottest Bachelors from Around the World," which consisted of a few other countries, including, Romania, Ukraine, Israel, Russia, France, and Brazil. Per a July 2015 international Bachelors and Bachelorettes list from Splinter, there have also been contestants who once sought love in Slovenia, Norway (which apparently merged halfway through its season with Sweden's Bachelor season), and Poland.

As for those starring in the Winter Games, here is a list of the international men:

And these are the international women:

In addition to those from the U.S., you can check out the international contestants photos here.

There will be only four episodes (premiering Feb. 13 at 8 p.m. ET on ABC) of the special event, where the men and women will compete in "winter-themed challenges." Per Entertainment Weekly, the point of this competition series is for viewers to watch a "smattering of countries across the world seeking to hurdle language barriers and cultural differences to romantically connect."

Hosted by Chris Harrison, obviously, the 24 competitors will unite at a Vermont resort, where different events will be set up for them, including a winter biathlon and ice dancing. Former Bachelor Nation stars and current spouses, Trista and Ryan Sutter, will serve as grand marshals for the welcome parade. There will even be guest appearances from current Bachelor Arie Luyendyk Jr., Rachel Lindsay, JoJo Fletcher, and also Olympic skating silver medalist Nancy Kerrigan.

So, yeah, The Bachelor and The Bachelorette certainly have found their place globally. That's something the Winter Games seems to celebrate. The spin-off will air essentially as an alternative to the February 2018 Winter Olympics. If you're not into watching professional athletes play sports or seeing your country taking home any gold, silver, or bronze medals, then you can watch these reality stars make an attempt at their own version of the Olympics.