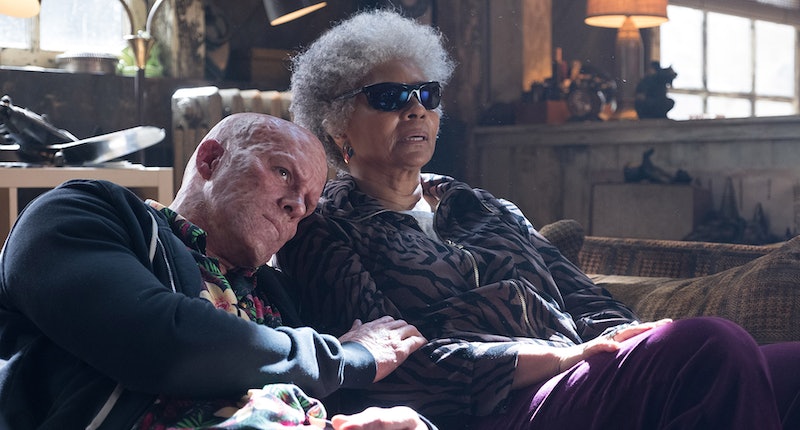 Spoilers ahead. Deadpool 2 has a shockingly happy ending considering that the love of Wade Wilson's life is killed in the first 10 minutes. Despite this heartbreaking loss, the end of the film is pretty uplifting and funny thanks to the post-credits scene in Deadpool 2. Technically, though, there are many Deadpool 2 post-credit scenes because it's really a giant sequence. In this film, the post-credits scene is really a subsequent group of multiple small scenes. These scenes are put together to create a kind of post-credit sequence as opposed to a few separate moments sprinkled throughout the end credits.

Deadpool 2 ends with Deadpool saving the day, keeping Russell the angry teenage mutant from becoming a killer, thus saving Cable's wife and daughter from the future, but in doing so, he sacrifices himself. Moved by his sacrifice, Cable decides to use his final time traveling charge to save Deadpool's life, which means he's going to be stuck in the present day until he gets another charge. For a moment it looks like Cable's time traveling tech is broken, or at the very least obsolete, but then the credits roll. After a first wave of fun credits, the post-credits scene begins.

Negasonic Teenage Warhead and her girlfriend Yukio are sitting at a workstation, fiddling with Cable's time traveling device, Deadpool waiting eagerly in the doorway. Negasonic Teenage Warhead reluctantly fixes it and tosses it over to the superhero, warning that Cable might kill him when he finds out. Of course, Deadpool isn't really one to fear consequences, and, armed with a time traveling device, he goes to four separate moments in time (some might call these four different post-credits scenes).

The first thing Deadpool does with his ability to travel through time is save Vanessa. He keeps her from getting shot by goons, but in an impressive instance of forethought, he doesn't just live out his life with Vanessa happily ever after. Instead, he continues on with the journey of the film, finding Russell, recruiting the X-Force, and bonding with Cable to help save the kid. (No wrinkles in the space time continuum here.)

Moving forward in time a bit, Deadpool saves Peter's life during the X-Force's doomed rescue mission, instructing him to walk away. It's unclear whether or not Deadpool even attempts to save the other members of the team, who originally die early in the mission, but Peter is the only one who Deadpool really seems sad to lose.

Deadpool's next stop in time is X-Men Origins: Wolverine. He crashes the final showdown between Wolverine and a tortured and mutilated Wade Wilson, shooting this previous version of Deadpool in the head before he ha a chance to fight Wolverine. "Just cleaning up the timeline," he says.

Finally, in an attempt to further expunge any embarrassments from his resumé, Deadpool makes one final stop in time, shooting a younger, eager Ryan Reynolds holding the script for Green Lantern. "You're welcome, Canada," he tells the audience. And that is where the time traveling post-credits sequence ends.

Deadpool 2's hilarious post-credits sequences is not without consequences. Vanessa's revival opens the door for little Deadpool babies in the near future, as well as Vanessa's mutant superhero alter-ego, Copycat. Peter's survival ensures that the regular guy in a superhero team gag could live on in the planned X-Force movie. And killing his X-Men Origins: Wolverine self means that Deadpool is officially the one and only version of the character in the current X-Men universe. Finally, the Green Lantern joke is really just funny — unfortunately for Reynolds, there is no erasing his first attempt at being a superhero.